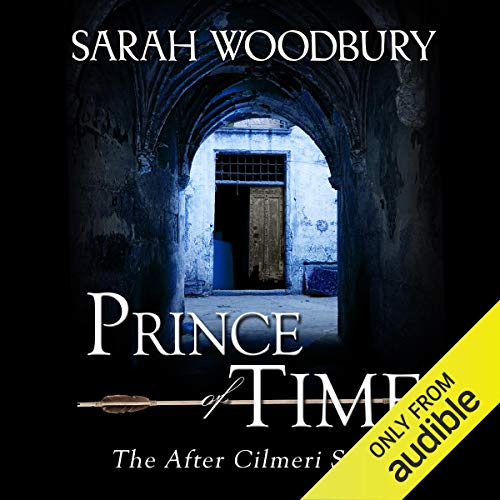 Prince of Time is Book Two in the After Cilmeri Series:

Two teenagers are catapulted back in time to alter history and save the medieval kingdom of Wales...

David and his man-at-arms, Ieuan, find themselves alone and on the run from a company of English soldiers who've sworn vengeance for the recent death of their king. Meanwhile, Llywelyn lays on his deathbed, wounded by a traitor's arrow. And once again, it is David and Anna, and all that they represent, that holds the key to the survival of Wales.

Prince of Time is the second book in the After Cilmeri series.

What listeners say about Prince of Time

THE NARRATOR WAS GREAT AND EASY TO FOLLOW. STORY IS ACCEPTABLE FOR PEOPLE OF ALL AGES. CLEAN, FUNNY, ADVENTUROUS AND INTRIGUING THROUGHOUT. THE THREE IS AN EXTENSION ON BOOK TO AS THE PRINCE FALLS THROUGH TIME RETURNS TO OUR WORLD SEES THE CHANGES DESPERATELY SEEKS TO RETURN TO THE WALES OF ANOTHER WORLD. HOME. STORE IS EXTREMELY WELL-WRITTEN THE NARRATOR'S GREAT AND EASY TO FOLLOW

Twist and turns all though this story! The narrator was fantastic with the character's voices. I've listened to this book many times over.

Even better listening to the book!

I've read most of the series and thought I'd listen whilst doing chores or walking. I love the story of Bronwyn and Ieuan and the antics of modern meets mediaeval; and of course the previous set of characters we've met and loved. The story comes alive with the narrator doing different voices and accents-female, male, British and American English and Welsh! I highly recommend both reading and listening.

Fun and interesting exploration of “what if”

Fun and interesting exploration of “what if” a small, key battle had gone differently in History? Sarah Woodbury ties together modern day with a time period and country most of us never think about, but one battle with very few people— an ambush, really—could have changed that forever for us all. I’ve shared this book with half a dozen others who, like me, have grabbed up the sequel as well.

History is not Destiny

If you could sum up Prince of Time in three words, what would they be?

I liked that what started as a Time Travel story where the characters realize they are in a past time, in this book evolves to a realization that rather than travelling through time in a single continuum, they are traversing time periods between connected but also independent timelines. David, the young Prince, is freed from the constraints of what was the past, the history before, and takes charge of his, and his people's, destiny to chart their own future history. This appeals to the idealist in me.

What does Laurel Schroeder bring to the story that you wouldn’t experience if you just read the book?

Laurel Schroeder is able to express the personality of each character so well, that listening to the book is like hearing each point of view from the character themselves. The audiobook is, for me, definitely an enrichment of my experiencing the story.

There were plenty that had me laughing, not so much as to a joke, but in understanding - comprehending for example the feelings that Bronwyn may have experienced as she adjusted to medieval life. Being a time traveler is, I imagine, much like being an outsider or foreigner trying to function in a different culture or society - something that I can empathize with - and I found myself resonating with many moments in the book. However, the moment that particularly moved me I think would be when David's aunt came back to the house and said "I'm ready to listen"

* Fair disclosure: I received a promotional code for this audiobook, with no strings attached. My opinions are my own and are the same opinions I would have had if I had purchased the audiobook outright - which I would have done if I hadn't received a copy from the author.

I'm so hooked I'm on book 4. Which could be book 8 if I had just read each one and moved on . But I have read each to get all the information straight then listen to the audio to enjoy the characters .. Love it!!

Story is good, but this is definitely not read as great as some audio books.

If you love time travel adventures with a hint of romance you will love this series. 10/10 would recommend. I love it!

This series is addictive. In this story, we have David navigating post-Edward political turmoil with his new friend and bodyguard by his side. Love story between Bronwen and Iain (sp?) is really adorable as well. The story goes from one event to another seamlessly with suspense, tension, humor, and love threading through it. Love this blend of historical fiction + fantasy/sci-fi.

I love the story! I want to finish all books in this series. Kudos to the writer and narrator!