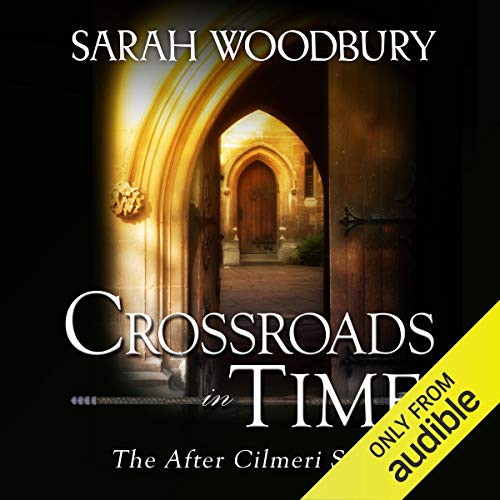 Three years have passed since the events chronicled in Prince of Time...

Anna has made a place for herself in 13th century Wales as a wife, mother, and healer. David has taken more of the kingdom's rule on his shoulders, even as his relationship with Lili has caused friction with his father, King Llywelyn. The King wants his son to seek a political marriage that will benefit his country - and possibly place the crown of England on David's head.

England and Wales have shared a border and an uneasy peace for three long years.

And that peace is about to be broken...

What listeners say about Crossroads in Time

I've tried to read this series. From the descriptions it's everything I want in a book. However, I couldn't get into them because there is no character development. It's all this battle or that, but no character insights. Almost no indication of character thoughts or feelings about anything. Major life events are just thrown in as a sentence as if unimportant, such as the main character being married and his wife pregnant in one sentence in the epilogue. Supposedly they have been in love since the prior book ended, but there is zero explanation of why they even like each other. Left and right people are taking over castles, etc, and although political motivations are given, personal experiences are not reflected; almost no sense of the fear of battle or how the people on these castles feel about the constant changing of who they have to obey. These read more like history books than novels. There is no climax at the end of a book, it's just suddenly done; a series of battles are finished - the only reason for the change in books is a significant time gap in the story.
The performance is good as the reader is capable of employing a variety of accents to distinguish the characters' nationalities.

What made the experience of listening to Crossroads in Time the most enjoyable?

Laurel Schroeder simply brings the characters and the story to life. I've read the book(s) before, and yet, there was so much to the story and the characters that I missed in simply reading the books and forming my own mental images from the words. Hearing the story read by this narrator was like hearing the characters themselves telling the tale, and reliving it along with them.

What other book might you compare Crossroads in Time to and why?

There is no comparison.

Which character – as performed by Laurel Schroeder – was your favorite?

In this book, it has to be Anna. This is Anna's story, out from under her brother's shadow and a woman and mother in her own right. Fans of the Meg & Llewellyn story line maybe have a bit of adjustment, and while David figures centrally with the development of his relationship with Lily, this is Anna's coming of age and attesting to her power and strength.

I finished listening to this just after New Years and life got in my way where I just now caught my breath enough to post a review. I have to make do with other books while I go through withdrawals on this series now until the next book comes out. For fair disclosure, my copy of this audiobook was gifted to me by the author, who I only know as a fan and there were no strings or requirements for a favorable review attached to the gift.

love love love, love this series, can't wait for the next one to be released

I loved how the story was told from different points of view.

My favorite scene was when Anna came up with the escape plan for her, Remind, Maude and the children.

I'M AT A CROSSROADS ON THIS ONE. JOKING I LOVE IT

NO JOKING I LOVE THIS ONE. EXTREMELY WELL-WRITTEN AND EASY TO FOLLOW. NARRATOR IS GREAT. ACCEPTABLE FOR PEOPLE OF ALL AGES. THE CROSSROADS OF THE STORY DUTY TO COUNTRY OR TO THE ONE YOU LOVE. OR STAY OR GO IN WHICH TIME. LISTEN AND FIND OUT WHERE THE ADVENTURE GOES

As with the begin of the series , I absolutely Love it. And would recommend. This book and the whole series to every One !!!! 5 stars in all categories.

I loved the closeness to the history of England and Wales. The characters in the story seemed so real and believable. I'd recommend this book to my friends, as well as my two daughters. Loved it!

Like the books and its perfectly adventuresome story and cannot wait for the next book.

IT KEEPS GETTING BETTER!

If you could sum up Crossroads in Time in three words, what would they be?

What was one of the most memorable moments of Crossroads in Time?

The reconciliation between father and son. The story fast forwards three years from Prince of Time, so we do not get to witness the breakdown of the relationship between Llewelyn and David. But knowing as we do that their bond literally transcends universes, we are hit with the reality that their relationship has been strained, which makes it all the more poignant to see them reconcile and witness Llewelyn's paternal instincts kick in as he gives David advice.

Have you listened to any of Laurel Schroeder’s other performances before? How does this one compare?

I have listened to the prior installments of the After Cilmeri series and they get better and better as the listener goes through the series, although Prince of Time remains my favorite, likely because it is my favorite installment overall, but also because it is most engaging performance-wise because it crosses from medieval Wales to modern day Pennsylvania.

I choked up when David and Llewelyn set their differences aside. This is the most poignant of the series thus far in the way it shows Anna coming into her own as not just a sister, daughter and wife, but as a mother and brave, cunning princess. And David's childhood/young adulthood ends in this book, something we get more insight into in the next book.

This series is absolutely AMAZING!!

A good fight for a great family

If you could sum up Crossroads in Time in three words, what would they be?

Family above all. This book is all about family.

What was one of the most memorable moments of Crossroads in Time?

David and his father's reconciliation. It was very heartwarming.

I love how she able to portray so many different characters, their emotions, their accents, and her grasp of the languages. She's an amazing narrator.

When David and Lily finally got together.

This book was mainly a battle book with no time traveling. It's one of the few that has none in the series. Which is a great thing. It means it's about the story and the time traveling is a mere side effect of progression. Some people have issue with the fact that Anna has a huge role in this book and David does not, but in truth - Anna is also just as important as David. She is able to jump time just as he is. She was stranded in the Middle Ages just as he was. It felt right that she played an important role in saving essentially her country as well as he. She is a Princess of Wales, not just a secondary character who just happened to be there. People should remember that.