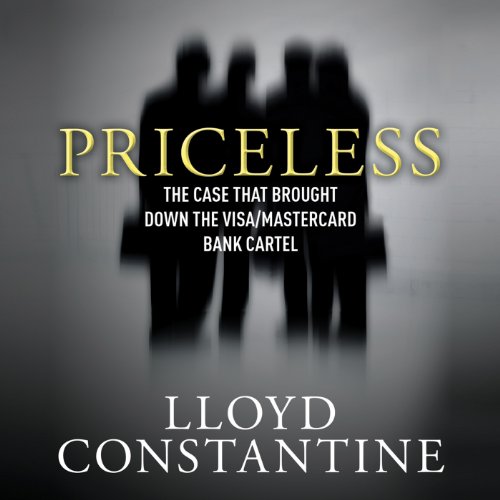 Alan Robertson's smooth rumble quickly pulls listeners into the complex world of high-stakes litigation as he performs this true story about the biggest antitrust lawsuit in history. Attorney Lloyd Constantine provides an inside account of his battle against financial giants Visa and Mastercard to prove that millions of U.S. businesses were being illegally coerced into paying excessive fees every time a customer used a debit card. Robertson makes subtle changes to his cadence and timbre to heighten the suspense as Constantine navigates tense backroom meetings and hostile courtrooms, and listeners will be enthralled until Constantine brings his case to a close.

Lloyd Constantine began his career in legal services, representing impoverished clients in civil rights and constitutional cases. Decades later, he would make headlines for representing retailers and consumers against a cartel that undermined one of the fundamental tenets of commerce in America: competition. A man who thrives on competition himself, Constantine now gives us the insider's story on the biggest antitrust lawsuit in history - a case that pitted his small firm against financial-industry giants Visa and MasterCard, along with Clifford-Chance, the largest law firm in the world.

Combining the real-life legal drama of A Civil Action with the relentless pace of a John Grisham novel, Constantine delivers the definitive account of a case that made history and will be studied for years to come. Beginning in the 1980s, when Visa and MasterCard - whose combined market share topped 95 percent - announced the merger of their debit card networks, Priceless traces the fallout of this catastrophic union, from raised eyebrows among attorney generals to the launch of a major class-action lawsuit. For the five merchants initially represented by Constantine's firm (Wal-Mart, Sears, Circuit City, Safeway, and The Limited), the reality of the situation was clear: Millions of U.S. businesses were being illegally coerced in a scheme that forced excessive fees on merchants every time a customer used a debit card. When a $3.4 billion settlement was reached in 2003, the court estimated that the case would save stores and shoppers up to $87 billion in the first decade alone.

A suspense-filled story with a vibrant cast of characters - and a smoking-gun document known as "The Shark" - Priceless travels from corporate backrooms to the courtroom to capture one of America's biggest triumphs in the high-stakes world of antitrust litigation.

What listeners say about Priceless

Great listen – I could not stop

If you like books about how business works then you will like this book! The book details the legal case surrounding Visa / Mastercard and their attempt to extend their dominance in charge card products to the emerging debt card technology / market. I enjoyed the author:
•laying out the background to the case, including his work on other anti-trust cases
•the key anti-trust points, without making it boring
•the legal arguments used in the trial, so that a non-lawyer like myself could understand
•the critical procedures and strategies used to influence the process (as an example the non-verbal cues used by the judges).
•getting the book edited to make it the perfect length