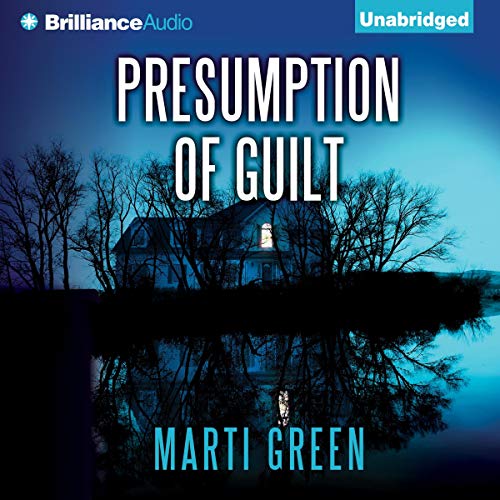 Twelve years ago, teenager Molly Singer was tried and convicted for murdering her parents. She was sentenced to two consecutive life terms in prison, torn away from her newborn daughter, and forsaken by those closest to her. But now, a series of anonymous letters proclaim her innocence - and point a finger at a deadly conspiracy.

Attorney Dani Trumball specializes in defending the wrongfully imprisoned at the Help Innocent Prisoners Project. But taking Molly's case means taking on a hard-hearted justice system that doesn't like do-overs... and a merciless killer who will do anything to keep a secret history of dirty deals buried. Only the truth will set Molly free and reunite her broken family. And only Dani has any chance of finding it in a showdown that will push her legal talents - and her survival skills - to the very edge.

What listeners say about Presumption of Guilt

3.5 Entertaining But A Little Far Fetched

This book starts out, in the first few pages, fairly promisingly---a young girl is accused and convicted of killing her parents, although she is innocent. A group of lawyers involved in an Innocence Project-like practice take on her case.

However, the book then takes a turn when the true circumstances of her parents' deaths start to unfold. People start getting killed like flies, in a way that is almost funny in its overkill. The truth involves just about everyone you could possibly imagine that is in power in the fictional Hudson county. The ending is never really in doubt, but first we go through lots of court action repeating plot points.

I think the author was very well meaning. She wanted to illustrate several points, most especially that false confessions occur more often than you would think.

However, the first book was better than this one. But the book was still entertaining and I will continue to the next book.

Tanya Eby was very good with the delivery of the story

Very much enjoyed this novel, really felt for Molly. Nice amount of twists and turns throughout the book. Only one negative, I was getting a bit tired and annoyed at having to hear about Dani's son and his impairment, it was definitely over stated and referred to too many times in the first half of this story and not pertinent to the novel. I'm hoping it's barely mentioned in the next book.

Presumption of Guilt is Book 2 in the 4 novel Innocent Prisoners Project series by Marti Green. The story in fascinating and the suspense is intense. A 17 year old girl is wrongfully convicted of murdering her parents and has spent 12 years in prison. This novel clearly shows how our criminal justice system can be manipulated by forced false confections, overzealous DA's, and crooked judges.

Tanya Eby does her usual stellar job of narration. I found that narration was best at 1.5x recorded speed.

Good from start to finish! Excellent example you dont have to have
sex , and filthy language to have a really good book. Matter of fact it makes it better! Thanks!

I purchased Presumption of Guilt for $1.99. It was predictable yet entertaining enough at that price. I wouldn't pay more.

Like some other readers I found the suspense to be somewhat lacking in this book. It was hard to stay with it until the end, but in the final chapters there was a slight twist that added some more interest.

educational with a wonder story line

I had no idea of the process of freeing, an
innocent person. I truly think our justice system is over stressed, with not enough time to establish facts. .
in my ignorance of the system I probably miss
spoke. but this is a book of depth . plus introducing me to William's syndrome.

Presumption of guilt follows attorney Dani Trumbull's work with the Innocence project. This is book 2 in a series. This book is the second in a series of 4. The "cast" of the series is great with a variety of characters. I love the narrator!! Her voice is clear and she voices multiple accents well. I highly recommend the series!

my favorite series yet

when I read the description of the books in this series I wasn't sure if I would like them but I gave them a chance and now this is my favorite series . there's plenty of action and these books always take turns that I never see coming. they have my attention from the first word to the last.

I listened to the first book in the series a while ago and couldn't remember why I didn't get the sequel. After listening to the narrator it came to me. The characters and the story lacked depth and substance. I also thought there were way too many characters to keep track of, and not too much that stood out about them.