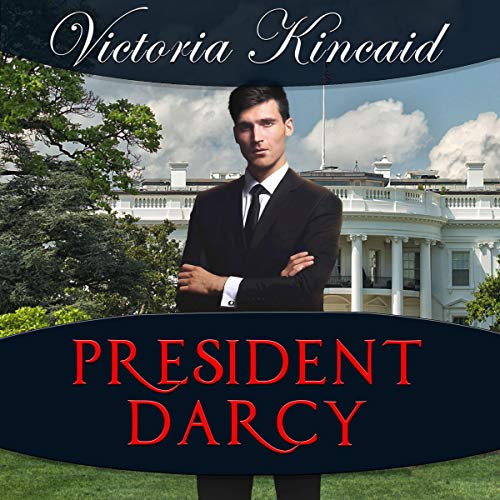 By: Victoria Kincaid
Narrated by: Lucy Emerson
Try for £0.00

A modern adaptation of Jane Austen’s Pride and Prejudice.

President William Darcy has it all: wealth, intelligence, and the most powerful job in the country. Despite what his friends say, he is not lonely in the White House. He’s not. And he has vowed not to date while he’s in office. Nor is he interested in Elizabeth Bennet. She might be pretty and funny and smart, but her family is nouveau riche and unbearable. Unfortunately, he encounters her everywhere in Washington, DC - making her harder and harder to ignore. Why can’t he get her out of his mind?

Elizabeth Bennet enjoys her job with the Red Cross and loves her family, despite their tendency to embarrass her. At a White House state dinner, they cause her to make an unfavorable impression on the president, who labels her unattractive and uninteresting. Those words are immediately broadcast on Twitter, so the whole world now knows the president insulted her. Elizabeth just wants to avoid the man - who, let’s admit it, is proud and difficult. For some reason, he acts all friendly when they keep running into each other, but she knows he’s judging her.

Eventually, circumstances force Darcy and Elizabeth to confront their true feelings for each other, with explosive results. But even if they can find common ground, Mr. Darcy is still the president - with limited privacy and unlimited responsibilities - and his enemies won’t hesitate to use his feelings for Elizabeth against him. Can President Darcy and Elizabeth Bennet find their way to happily ever after?

What listeners say about President Darcy

Down with Trump, President Darcy has my vote!

Another homerun! I really enjoyed this modern reimagined take on Jane Austen's Pride and Prejudice. Victoria Kincaid made this version of Darcy very beautifully socially awkward but very interesting and intelligent.
I hope more books by Victoria Kincaid are released on Audible. Ms Lucy Emerson did a great narration job.

I loved it. Great modern Jaff where you have much of the canon bits. Highly recommend this book to a Jane Austen fan fiction lover.

I’m happy I gave this book a chance! It was great. Totally recommend it. This modern pride and prejudice version is intense, It was very hard for me to pause the book even for sleeping.

I have listened to almost 20 different variations and this one is one of the best. I absolutely loved it!! You won’t be disappointed.

Funny love story between Lizzy and Darcy. Ms Kincaid had made is so light hearted and easy to follow. All the eccentricities and their decision are somewhat ridiculous but will make you laugh . I have read this multiple times and. And you will never get tired of it.

This is a modern tale with all the characters you love from P&P. President Darcy is as stiff and formal as he was in the original tale. Elizabeth is headstrong and quick to accuse Darcy of prejudice and arrogant e. Who I liked most was Lydia Bennett. She is exactly who I’d imagine as a young silly girl today. There were several funny moments that made me laugh out loud, especially Mr Colins. Very sexy without the details. Well written and narrated. I would have given five stars for the story but I’ve read better.

Fun listen, but cringy in places. Some words were used too often. Some passages got repetitive. Elizabeth Bennet wasn't *quite* written to my satisfaction. But that's how I feel about these characters in any other hands besides Austen's. Loved the ending though. Round of applause for that!

This variation was a delightful change of pace. It was much different than any other variation I have listened to. I don’t usually like modern D&E stories but this one was an exception. It was lighthearted — simply fun.

I'm a Republican, but Darcy would get my vote.

A great take on Pride and Prejudice. Wish more modern takes of that were created. I've seen only a few. The best modern telling yet. Hope the author's other books are on Audible. Great narration as well, even if I hadn't heard of her before.