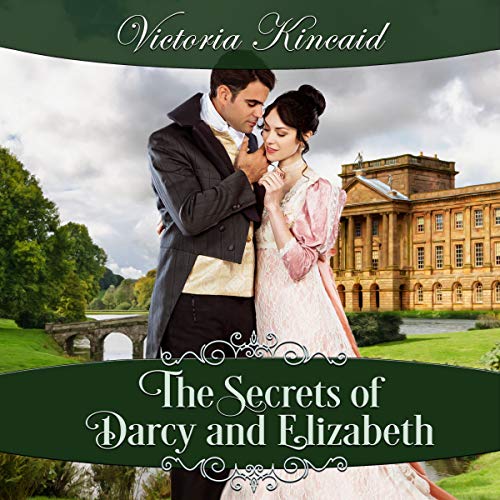 The Secrets of Darcy and Elizabeth

By: Victoria Kincaid
Narrated by: Stevie Zimmerman
Try for £0.00

What if Darcy and Elizabeth were plunged into the war between England and France?

It is 1803, and a treaty has allowed England and France to enjoy a brief moment of peace in the midst of the Napoleonic wars.

Darcy is despondent over Elizabeth’s refusal of his proposal at Hunsford, so Colonel Fitzwilliam proposes a trip to Paris as a distraction. At a ball, Darcy unexpectedly encounters Elizabeth, who is visiting Paris with the Gardiners. He sees this as his opportunity to court Elizabeth properly and rectify past mistakes.

Before he can make much progress, however, England declares war again, and Darcy must help Elizabeth flee France. As they make their way to the coast, Elizabeth and Darcy must battle brigands, French soldiers, illness, and their own mutual attraction - all without a chaperone.

When they return to England, Elizabeth and Darcy have their own secrets to conceal - even from those closest to them.

What listeners say about The Secrets of Darcy and Elizabeth

5/5 Stars not available to tick.

Excellent plot although I hot a little frustrated in the middle by the secrets it became apparent for the plot why these occured.

It is romantic, amusing and exciting book and highly recommended.

I love Darcy and Elizabeth! It's the passionate relationship I always thought it would be!

It has stayed true to Jane Austen characters personalities and how she writes and the story is fantastic!

The back half stalled for me

I liked it, then ODC returned to England and it crashed for me.... The secret keeping became absolutely implausible after a point. I ended up skipping chapters because my level of frustration was through the ceiling. I love Stevie Zimmerman as a narrato. I still love Victoria Kincaid as an author. This story just pushed me too far in the end.

This variation seems organic in the way that it changes from canon. In another story set with ODC in France (the title escapes me) the story was well done, but the premise seemed a little contrived. Lizzy was thought dead in a boat explosion and Darcy heads to France, maybe you know the one I mean. Don’t get me wrong, I liked that book, but this one has a more believable start.

Here, post proposal, Darcy is depressed and Richard, called in by a worried Georgiana, convinces him to take advantage of the new peace treaty and visit Paris to take his mind off of whatever is wrong with him.

Meanwhile, instead of a visit to Derbyshire, the Gardners have taken Lizzy with them when Mr. Gardner has a business opportunity that takes them to France.

They meet at a Ball being held for English citizens visiting Paris after the war by the English wife of an adviser to Napoleon. Just as they start to heal the damage done by their prior acquaintance, the treaty is broken and they must flee France.

From here, the story unfolds with occasional visits to the timeline of the original with excellent results.

As usual, Stevie Zimmerman is simply perfect. I’ve said this before, but she improves the story with the way she brings characters to life, even to the point that she makes even mediocre stories better. Give her an excellent story like this one and you have a winner.

A little absurd, but fun!

As far as I can tell all of this authors Pride and Prejudice variations are of the fluffy/sappy variety. That's not to say I'm knocking it! You just have to know what you're getting in to going in. This is a fluffy piece, if you're looking for a more serious piece, keep looking. Out of all of hers I've read/listened to though I think this one might be my favorite. It's just fun! There's a lot of action up front and a good ol' nefarious scheme to be thwarted later on. This hits a lot of JAFF tropes, but it's a fun ride. The one thing about this one that annoys me though is the sort of convoluted way Darcy and Elizabeth go about keeping their big secret once they're back in England. There are so many times where you think, "If they just told everyone the truth none of this would be an issue." Almost immediately their excuse for keeping the big secret doesn't really seem justified. That said, if you're willing to suspend belief it's still pretty enjoyable.

A lot of JAFF readers/listeners are familiar with Stevie Zimmerman, she's a terrific narrator and her Darcy is just perfect. My only quibble is her Georgiana voice which I always want to fast forward through, it's TOO innocent and insipid. Georgiana isn't really in this one a lot though so it's pretty smooth sailing.

The story is enchanting and Zimmerman's voice is always wonderful to listen to. I enjoyed this book immensely as I think any Darcy and Elizabeth fan will.

I love all the books I read about a Pride and Prejudice people Victoria Kincaid is certainly a mistress of the genre.
I can’t wait to read another of her books.

I really enjoyed this story..... This variation was so captivating and the ending was great!!!!! I loved the narrator!!!!!

I liked the story and it keeps you hooked all the way to the end.

This hands down is my favorite P & P variation. Lots of twists, I was on the edge of my seat, I teared up a couple of times. I highly recommend. Oh, and the narration was done so well. Loved her French accent I could picture the entire story. Thank you Audible, I’m so happy my daughter started this for me.

A delightful & intriguing variation on the P & P theme. It is full of novelties and surprises and will not disappoint!!

Kincaid creates another fun plot. It’s entertaining to discover at what point the story will break off from Pride and Prejudice and go in a new direction. This one did not disappoint in its originality and excitement. Another excellent read!