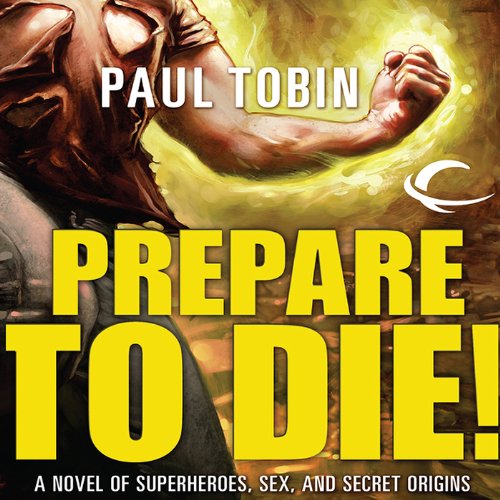 When Reaver is captured by his nemesis Octagon, he is allowed a two-week stay of execution to get his life in order before he is to be killed. He decides to return to his old life - before the chemical spill that turned him into a superhero - as Steve Clarke, and back to the girl he has always loved. Paul Tobin creates a moving meditation on mortality and regret in Prepare to Die!, a powerful demystification of superhero myth. Ray Chase gives an indelible performance, augmenting the broken, yearning, and rueful emotion behind Steve Clarke's final days.

Nine years ago, Steve Clarke was just a teenage boy in love with the girl of his dreams. Then a freak chemical spill transformed him into Reaver, the man whose super-powerful fists can literally take a year off a bad guy’s life. Days ago, he found himself at the mercy of his archnemesis, Octagon, and a whole crew of fiendish super-villains, who gave him two weeks to settle his affairs - and prepare to die. Now, after years of extraordinary adventures and crushing tragedies, the world’s greatest hero is returning to where it all began in search of the boy he once was...and the girl he never forgot.

Exciting, scandalous, and ultimately moving, Prepare to Die! is a unique new look at the last days of a legend.

"This is something of a comic book without drawings, and Chase brings his A-game, further energizing the action scenes and making for a guilty pleasure of a listen." (AudioFile)

I really enjoyed the book and when I heard that last sentence, I wondered if it was leaving a door open for a sequel and immediately checked back here. Now I just have to wait for the rest of the trilogy and hope they are as engaging and entertaining!

I was hesitant at first since i saw it had no rating and no reviews, but this audiobook is something i recommend to everyone. it will suck you inn and leave you wanting more.

A Superhero's "Behind the Music"

Imagine if Wolverine from the X-Men had written a tell-all autobiography á la Rob Lowe's Stories I Only Tell My Friends or _The Kid Stays in the Picture_ by Robert Evans. You'll be pretty close to the overall flavor of _Prepare to Die!_. It dishes up action, existential ruminations, feel-good nostalgia, adolescent angst, and a few genuine surprises along the way.

Prepare to Die! imagines a superhero universe from the ground-up, replete with the internecine conflicts, epic battles, and agonizing betrayals that normally unfold over the run of a comic book series. The book is written in an in-universe, autobiographical voice. Its "author" is a superhero known as Reaver -- so-called because he can take a year off a person's life with each of his punches. Reaver is writing for an audience that already reads about superheroes in tabloids and watches them on TMZ. Superheroes are are as much a target of the paparazzi as they are of supervillains. The in-universe audience already knows the characters. They know their stories, but they don't know the _whole_ story.

The story starts off with our hero, Reaver, facing down his arch-nemesis Octagon. Reaver is losing badly. He's cornered, out of options, and has literally no fight left in him. As Octagon prepares to administer the coup de grâce, he delivers the bad guy boilerplate: "Prepare to Die!" Reaver ponders this and responds: "Ok. How long do I have to prepare?" Surprisingly, Octagon agrees to give him some time to prepare to die. This sets off an existential journey through Reaver's past. He examines the genesis of his superhero powers and persona. He takes a trip back to his childhood hometown to see the love he lost when he took up the superhero-ing life.

I'm not a comic book afficionado by any means. Case in point: I was completely unaware that Paul Tobin has a day job as a comic book writer, writing storylines for Spidey, the Fantastic Four, etc. He may be sticking to the writer's adage of "write what you know", but the book is much better for it. Tobin writes well, and uses the novel format to meander seamlessly from the present-day story through Reaver's past triumphs and tragedies.

Ray Chase's gravelly narration is a perfect fit for the world-weary Reaver. Great casting, and a great example of a book that should be listened to rather than read. Next story Chase narrates, I'm going to have a hard time separating him from the Reaver.

Criticisms? Well, the female characters tend towards the one-dimensional. Not entirely, and not in all cases, but more often than not. Also, the ending doesn't entirely make sense when you think about the book's intended in-universe audience. But, what the heck. This is a really, really fun book. By turns, it's thrilling, heartbreaking, and, above all, genuinely surprising. I came to it with no expectations, was hooked within a few chapters. By the end I was completely won over, and can't wait for Tobin's next book.

Captivating, Right Up To The Last Word

Would you listen to Prepare to Die! again? Why?

Yes. I would like to focus on some of the conversations between the main characters to see if I missed any clues that might have been given. There is so much revealed in the last two chapters that I found myself wondering if I had missed any hint of what was to come.

What other book might you compare Prepare to Die! to and why?

Rather than compare it to another book, I would compare the author to another author and that would be Ray Bradbury. Bradbury had the gift of making the unbelievable, believable, and that's the way I feel about Tobin's work.

Which character – as performed by Ray Chase – was your favorite?

Reaver. I finished the book about a week ago, and I have found myself missing his character. He is an endearing and complex hero.

Many times, while listening to this book, I thought to myself "This would be a fantastic movie!" So, while not terribly creative nor imaginative, my tag line would be "A Fantastic Movie!"

When will another book by Paul Tobin be available?

What did you love best about Prepare to Die!?

Story is very adult oriented for a super-hero theme. Almost tempted to say that it's more of a comedic drama with super-human elements. It's very grounded, in that some superhero themes are perceived as stupid by the characters, but they're forced to accept them since its reality for them.

What was one of the most memorable moments of Prepare to Die!?

The narration is great. A little growly at first, but it really grows on you.

Simple and fun, while not childish or campy

It wasn't particularly moving or dramatic, but overall it was an enjoyable and engaging read.

Amazing,fun,and just what I was looking for!!!

My only complaint is that this story needed an epilogue, because you can't have a great dinner then skip the dessert. There was great humor and the narrator making all the voices sound like the hero made it feel like he was telling the story, rather than reading a book. I love these hero books but good ones, written well are not always easy to find.

This had great humor , a relatable hero and just enough jokes to make me laugh every now and then. I don't necessarily want more books in this universe,however I would love to see a longer more detailed version of this one. This would a risky make a good movie or mini series. Not as finny as the Dresden files sometimes is, but good humor. The audio sample is a perfect example and actually is one of my favorite jokes in the book.

I can't quite place the voice. Maybe an old wolverine mixed with Orson Welles and Clint Eastwood? I enjoyed it no matter what. Even the relationship parts.

great entertaining story about a superhero in his final hours, good if you like superhuman philosophy or if you just want an entertaining read#

It a great NC-17 rated Escape!

Where does Prepare to Die! rank among all the audiobooks you’ve listened to so far?

This book was the love child of Beat the Reaper and Soon I Will Be Invincible-- terrific fun, terribly naughty, total escape!

Our hero, the Reaver, was the flawed Super Hero that most of us would be . . .

There were many great scenes, but the fight between Reaver and Laser Beast in the strip club was worth a listen.

I listen before and after work and when I'm working out-- instead, I wanted to keep going to work . . .and I even worked out more often . . . so that I could have another excuse to listen. That's a pretty good endorsement right there!

If you're easily offended, don't bother. If you look at life with an (oft-inappropriate) sense of humor-- download and Prepare to Laugh!

What did you love best about Prepare to Die!?

An R rated super hero story with some unique characters, made me laugh numerous times. This book was meant for an audio book.

I enjoyed the story overall but the author/character is annoyingly preoccupied with all things sexual. I have never heard about so many erections in a book like this before. Move on, jesus.

do yourself a favor and treat yourself to some time off while listening to this book. you'll most likely read it 3x faster than anticipated.