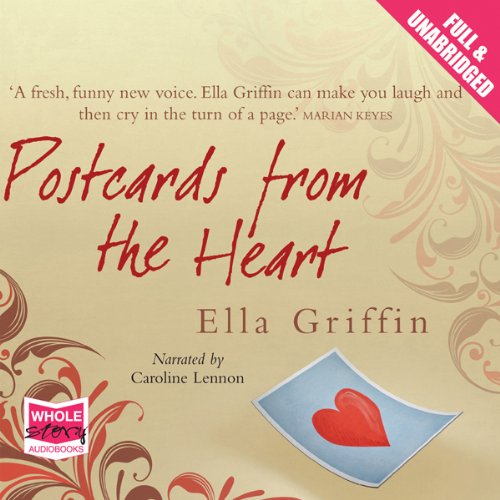 Postcards from the Heart

By: Ella Griffin
Narrated by: Caroline Lennon
Try for £0.00

Life is looking up for Saffy. After six years it seems like her boyfriend, Greg, is going to propose. Things couldn’t be more different for Conor and Jess. Even after seven happy years and two kids, she won't get married. But everyone's keeping secrets, and things aren’t quite what they seem. It's going to take some tough questions, and even tougher answers, before anyone's being honest - even with themselves.

Postcards from the Heart is a book about four friends in their thirties. It's about love, lust, life, death, balloon rides and missing hamsters. But most of all it's about figuring out how to stop saying 'I don't' and how to start saying 'I do'.

What listeners say about Postcards from the Heart

I am coming to the end of this and feel quite sad - as if I shall be losing a friend. I have really enjoyed listening to this and have warmed to the reader as much as the characters. Not a serious book but I like lots of different genres and have loved every minute of this. Will look out for more by the same author and narrator.

This is a very pleasent book. It has well drawn, likeable characters who were brought to life by the wonderful Caroline Lennon. I did feel it could have been more tightly edited. The last 3rd was great, the first 2/3rd went on a bit too much for me, so much so that, if I missed a bit due to being interupted etc, I didn't feel the need to rewind! Fortunately, since it was being narrated by Caroline, I stuck with it. I think I could happily listen to her read the phone book!

I thoroughly enjoyed listening to the book. There were plenty of laughs throughout & also some sad parts that did make me cry.
The narrator gave the characters personalities which helped with the story.
if you want a nice easy listen, then I would recommend this book.

This warm and funny slice of contemporary life delivers a memorable tale of several couples living in one of Europe's trending cities, with Saffy, a contemporary Irish woman, as the narrator at the heart of it all.

I found the book clever and well-paced and the characters likeable. Its infectious, often laugh-out-loud humor is one of its outstanding qualities, as is the compelling portrayal of the various characters in their respective environments. The tale of misguided affections, marital miscommunications, unexpected romance and the protagonist's poignant back-story, is woven together by the author with liveliness and flair.

In terms of the audio and delivery of the novel, the actress Caroline Lennon has to have almost the perfect voice for the main character, reflecting Saffy's background and accent with charm and accuracy. This quality made listening to the book very enjoyable.

My reading of this book was completed almost at one sitting, and it left me with the wish to read more of and hear more from and about Ella Griffin.

I will certainly be looking out for the audio version of her second novel, "The Heart Whisperer."

Endless meaningless details, not much plot.

This book is unbelievably frustrating. I was expecting a good story (not a great one) about four people, or two couples and their lives, secrets, children, and marriage, just like the description says (great books in this genre like "More Than Friends" and "The Woman Next Door:" by Barbara Delinsky or "Heart of the Matter" by Emily Giffin and "Another Piece of My Heart" by Jane Green were pretty good). Instead, it's an unbearable non story with a muddled plot that gets forgotten along the way and nothing seems to come to the surface ever, just forgotten. It's filled with naming labels and mundane everyday details like taking a nap, dressing and buying groceries, getting drinks at a pub, going peeing in a camping trip...plug in any menial task you can think of, it's there...to make you forget that there was a plot and some problems from the beggining but the details are so uninteresting, it just gets annoying.

A bunch of characters are introduced as coworkers of Saffi and Greg but they are not developed so you don't care about any of them or care to keep track of who they are and I didn't so I just let the audio play through those parts without paying much attention. I used those moments to do a hard climb on the spinning bike without really listening. I could tell I wan't missing much just more stupid fill in details. The problem is that since all characters sound the same, I would miss the next scene and be a little lost when the narrator started on another character but since nothing happens, it's no big deal.

The narrator did a nice job except that you can't tell who she is reading about. She goes from one character to the next and you won't notice because they all sound the same. Except for Saffi's boyfriend, Greg, who is and sounds like an ass but no one seems to address his stupidity. And also Marsh, she has a distinct accent but you won't really care about Marsh either (that's Saffi's boss).

There's Gill, Saffi's mom, author throws in a bit of breast cancer, don't worry, there's nothing to spoil here. It was thrown for drama or sympathy not sure if for Saffi or Greg but I found myself fast fowarding through all of Gill's chapters in the last six hours of the book. That's how little you care about her. There is Jess, the other main character. Completely contradictory, you really don't know what her problem is, she's mad all the time, loves her husband then hates him then has contempt for him but tries to seduce him, but chickens out, then hates him, resents his work, but loves him again and you won't know why!!! It's insane.. you really can't stand Jess most of the time. She has two kids that you won't get to love cuz you won't know them enough except that they have a hamster that gets lost for more stupid details about finding it.

Then there is Connor, Jess' husband, the only likeable character but for some reason, also doesn't like to communicate like all the other characters. You get to know him a little more than all the rest, his past, upbringing, and where he is at now and what he wants. He is the only somewhat developed character...but again...the missed chances and lack of dialogue between them it's frustrating. When they can say so much they say nothing over and over again. I really hope people don't behave this way in real life.

Then somewhere past halfway there is Joe and his kid. Nice enough characters but the ciscumstances of all main characters by this point are so ridiculous that you won't really get to appreciate them. I will say that by this point they are the only parts of the book I still want to listen to, so that's good I guess. It's too bad it took more than half the book to get to them. But don't get too excited the way that Saffi handles the situation with them makes you want to scream and slap her a few times if she were real. The author gives her plenty of opportunities to redeem herself and then takes them away, unredemmed, unresolved and sometimes never again mentioned.

Things never get explained, nothing gives it substance, or deepen story, plot nor characters . I kept giving it a chance. Thought it might turn around half way but it didn't .Drama escalates in stupid ways with gossip and misperceptions. Saffi goes on from one stupid choice to another and the lack of real conversations between the characters is a crime.

I have liked many books on Audible that I've wanted to leave positive remarks but haven't due to lack of time. This book was so annoying that all i kept thinking while i listened was what I was going to say about it in my negative remarks. But at least it inspired me to take the time to leave one. Thanks for reading, I hope this helped. If you get it anyway like I sometimes do even after a negative remark, I hope it's not as annoying and frustrating as I found it. OHH, I still have three dreaded hours to go before I finish. It really doesn't matter what happens at this point, I just want it over and I feel I need to finish what I started.