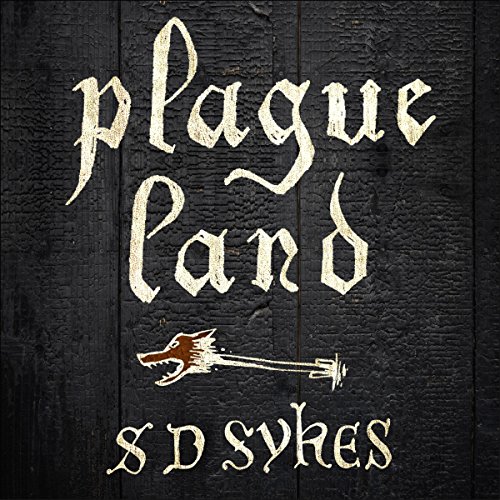 Oswald de Lacy was never meant to be the Lord of Somerhill Manor. Despatched to a monastery at the age of seven, sent back at 17 when his father and two older brothers are killed by the Plague, Oswald has no experience of running an estate. He finds the years of pestilence and neglect have changed the old place dramatically, not to mention the attitude of the surviving peasants. Yet some things never change.

Oswald's mother remains the powerful matriarch of the family, and his sister Clemence simmers in the background, dangerous and unmarried. Before he can do anything, Oswald is confronted by the shocking death of a young woman, Alison Starvecrow. The ambitious village priest claims that Alison was killed by a band of demonic dog-headed men. Oswald is certain this is nonsense, but proving it - by finding the real murderer - is quite a different matter.

Every step he takes seems to lead Oswald deeper into a dark maze of political intrigue, family secrets, and violent strife. And then the body of another girl is found.

SD Sykes brilliantly evokes the landscape and people of medieval Kent in this thrillingly suspenseful debut.

"Plague Land is a gripping historical crime thriller, an engaging coming-of-age story and a richly textured evocation of 14th Century Kent. I was totally hooked." (Jake Woodhouse, author of The Amsterdam Quartet)
"There are plot twists aplenty ... Plague Land is a quest to rebuild identity in an apocalyptic world, a theme that makes this new medieval series one I will be sure to follow." (Martine Bailey, author of An Appetite for Violets)

What listeners say about Plague Land

It was not bad

I liked the twists and turns, but the tone of the narrator, while good as a young man coming of age, was still a tad whiny. But I stuck with it and enjoyed it.

Who might you have cast as narrator instead of Ewan Goddard?

Someone with a less whiny tone. Sorry.

Did Plague Land inspire you to do anything?

Good to set a story in the aftermath of the plague...

I thought this book was aimed at the young adult market. I found it rather unsophisticated, however I may have been influenced by the narrator, who sounds about 16 and I suppose that's appropriate because the protagonist is a somewhat innocent teenager who had spent most of his life in training at a monastery which explains his naivety but not his free-thinking attitude. When his father and two older brothers die from the Black Death he is sent back with his friend, a priest, to take over management of the family estate where his mean-spirited sister and spiteful mother live.

The characters are reasonably well drawn, but I did not feel I was dropped into Medieval England as I had hoped. I had trouble with the transparently stupid self-confessed errors the main character makes because he fails utterly to understand the social environment he lives in and this struck a major discord. The disparity whereby our young protagonist has very modern beliefs and expectations would not happen in an unsophisticated world where the Church holds a superstitious and fearful populace in a tight grip.

Having said all that, the story itself is adequately convoluted with an excellent twist at the end which I didn't see coming and so the book ends well but its a shame that what went before held little veracity.

I have to compliment the narrator's different accents and voices, I can't even imagine a Cornish-French mix but he managed it very convincingly, not to mention female and older voices.

I won't be listening to this story again, I won't be looking for another book by S D Sykes, and I would think twice about listening to an adult book narrated by Ewan Goddard.

Enjoyable but nothing special

There were some good ideas in this book but I think it needed to be tighter. There's also a bit too much adolescent angst and discovery in this book for my tastes. It's an enjoyable story but nothing special. I think you need to have read the first book to understand what's going on.