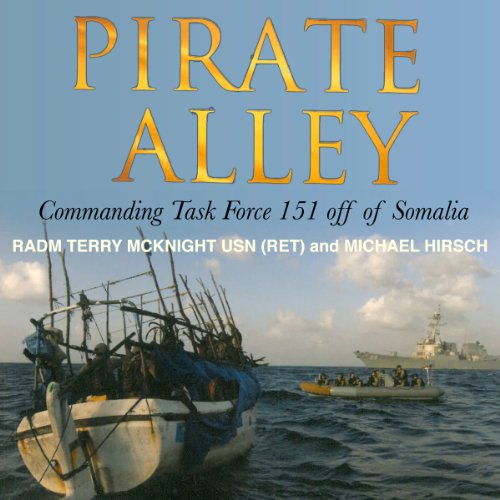 By: Michael Hirsh,Terry McKnight
Narrated by: John McLain
Try for £0.00

Rear Admiral Terry McKnight, USN (Ret.) served as Commander, Counter-Piracy Task Force - Gulf of Aden. He wrote the first draft of the Navy's handbook on fighting piracy while serving as the initial commander of Combined Task Force 151, an international effort to deploy naval vessels from several nations in a manner designed to prevent piracy in the Gulf of Aden and farther out into the Indian Ocean. McKnight personally commanded operations that disrupted several hijackings in progress, and resulted in the capture of 16 Somali pirates. That's when he ran head-on into the bizarre U.S. policy of catch-and-release, and realized that there's a lot more to fighting piracy than just catching some skinny youngsters armed with AK-47s and RPGs.

After his tour in the waters off the Horn of Africa and the Arabian Peninsula, he retired from the Navy and began seriously researching the subject. As a result, he and his co-author, journalist Michael Hirsh, have put together a very readable book that serves as a comprehensive introductory course on the subject. Pirate Alley includes a behind-the-scenes look at the SEAL Team 6 takedown of the pirates who had kidnapped Captain Richard Phillips of the Maersk Alabama. It also reveals what a young PhD candidate from Duke University found during three months on the ground in Somali pirate villages.

Pirate Alley explores every aspect of Somali piracy, from how the pirates operate to how the actions of a relative handful of youthful criminals and their bosses have impacted the world economy. The book examines various answers to the question: "How do you solve a problem like Somalia?" It explores the debate over the recently adopted practice of putting armed guards aboard merchant ships, and focuses on the best management practices that are changing the ways that ships are outfitted for travel through what’s known as the High Risk Area.

What listeners say about Pirate Alley

too limited a view

In fairness to the author, this was more of a book about the role of the Navy in preventing and/or dealing with pirates, than with the pirate issue itself. I was hoping to learn a lot more about how the pirates organize, operate and negotiate. Nonetheless, the book did provide a good survey of what the Navy does in this area, as well as what the shipping companies are doing to combat the problem.