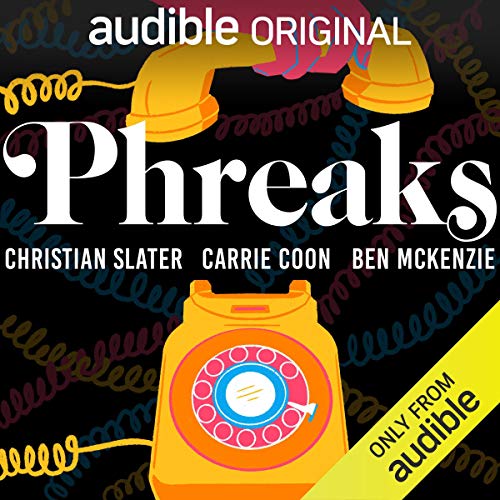 The year is 1970. Emma Gable, a blind teenager coming of age in a small industrial town in Western New York, is about as far from the seismic cultural transformations rocking campuses and city streets across America as a person can get. Emma escapes the chaos of her dysfunctional family by dialing up random numbers on the phone in her bedroom, just to see who'll answer.

But when a fateful call connects her to a mysterious band of proto-hackers calling themselves "Phone Phreaks", the revolution comes home, changing Emma's life for good. Because, Bell Telephone, the world's biggest corporation, is not amused that a handful of teenagers suddenly have the power to seize control of its vast and lucrative network and bend it to their will.

Bringing down the Phreaks is the corporate Goliath's number one priority, but for Bell Security agent Bill Connolly, the crusade becomes personal as he struggles to outwit and outmaneuver an adversary that seems always one step ahead of him.

Phreaks is the story of a fracturing family struggling to redefine itself as the world changes rapidly around it. Set at the dawn of the information age, its characters struggle with the same issues that define us today: privacy and surveillance, misuse of personal data, the ownership of ideas, our century-long obsession with the telephone, and the thirst for community that's driven us, since the dawn of time, to seek out new ways to "reach out and touch someone".

What listeners say about Phreaks

This was really interesting! I haven't heard of phreaking before, but it sounds cool and intriguing. I hope there will be another instalment!

This audible book is worth listening to just for the performance. The story was interesting, and informative about the time period. But I found Emma, the main character (and her parents) so unlikable and grating that it it detracted from the story. There ARE actually teenagers in the world who are not obnoxious. Every story needs negative characters, but this one doesn't have enough descent characters to balance the bad.

This little freebee was more engaging than it had any right to be. Extremely compelling and true to the hacker/phreaker mindset of (mostly) harmless curiosity. There were some details, both technical and historical, which were dead wrong, but they got the spirit perfect. Surprisingly light on likable characters but a satisfying story none the less.

A story to send the listener into to downward spiral to depression. Few redeeming qualities other than 90% great audio quality (some voices clearly done on poor equipment while others in the same conversation were crystal clear). Oh yeah; the performances were great. Too bad the message could not be more hopeful. The same sex encounter was an unnecessary element that did not fit with the justice crusader wanna-be plot. Slater's character needed his own novel to explore his sex-driven anger issues, but all he got was a dead-end aide plot. I won't lie. It clearly had an emotional impact on me. So perhaps it can be called a success, if instilling a sense of hopelessness in mind of the listener was the goal. It should bear the label: Warning do not attempt if you want to feel good today!

Absurd story. Can’t figure out why the effort to use a full cast was wasted on it. Technology of phreaking was slightly interesting, but the interaction of the characters was not realistic.

Interesting, but dragged me thru too much muck

I wanted to learn about the work of the Phrenks, and I did, but some of the side stories were darker than I signed up for. And a lot more profanity than I expected.

My only criticism is that it’s one of those books that sounds like you’re listening to a movie. It’s really disappointing. You hear constant background noise- crowd/traffic noise, crickets, footdrops etc.
For me it was too distracting and felt like I was in a movie theater rather than simply listening to a book.
The story was entertaining and interesting. The narrators (not true narration) were obviously actors with the talents to be on film.

The phone phreaking part of the story is dwarfed by family and male bisexual subplots that seem to want to consume the story. This story would be better without them.

Don't waste your time. just a bunch raunchy lines with a terrible plot . Disappointed in Audible. They can get better content than this.

I was hoping for a story about phreaking, maybe some stuff about capn crunch, how the system used to work, etc. The side stories about the main characters parents killed this book. Couldn't even get through "episode 4". Do not recommend.

I really enjoyed this Audible Original. It has witty banter, and is fast paced. The way it shows you the characters from every angle is very thought provoking. I will recommend it to my friends, and most likely listen to it multiple times.