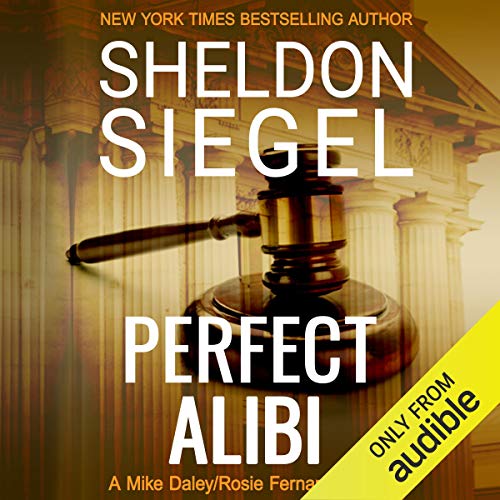 For Mike Daley and Rosie Fernandez, former spouses and current law partners, the stakes have never been higher. In the seventh installment of this best-selling, critically acclaimed series, the duo learns that their 16-year-old daughter's boyfriend has been arrested on suspicion of murdering his father, a Superior Court judge. Bobby Fairchild, however, claims to have found his father's body upon returning home from a date with Grace. The police, who found Bobby at the scene of the crime holding the murder weapon, contend that his parents' acrimonious divorce sent the boy over the edge.

With their daughter as Bobby's only alibi, Mike and Rosie take the case and uncover a sex scandal that takes them down San Francisco's darkest alleys and into the homes of the city's most prominent citizens.

What listeners say about Perfect Alibi

Why does the “Irish” bar owner sound like a pirate?

Small point I know but keep expecting him to go “arrrr Jim lad”...anyway, the book... not his best I’m afraid. Plot was pretty thing and drawn out too long. Culprit was too easy to spot, dialogue consisted of far too much “yes I am” , “no you’re not” arguments and nowhere near enough court arguments. Will still read the next one tho :)

After Judgment Day, This Was Pedestrian

Still interesting, and a plausible tale, but almost (but not quite), predictable!!

I'm convinced that 2 characters have the same names as a previous 2 characters in Judgment Day, but in seemingly diverse roles (all very confusing)! Whilst The character who was front and centre of this tale seemed pretty 1 dimensional.

This wasn't the best in the series sand seemed to be a drop in standard when compared to the previous book! And the conclusion seemed a bit rushed and ultimately dissatisfying.

I really wish there were about 10 more in this series. I've been listening to one right after the other and some were &quot;less good&quot; than the others but this one...WOW! On the edge of my seat and didn't know how it would turn out. Ordering #8 in the series now.
PS Thank goodness Tim Campbell is back!!!

Do you know what your kids are doing?

This is an excellent series by Sheldon Siegel. When I first heard about it—Mike Daley, ex-priest, lawyer leaving his law firm, practicing with his ex-wife, etc, I thought there were too many “gimmicks” for this to be a book that could work well. Wow, was I wrong. This series has consistently good stories (usually murders with good courtroom drama), as well as nicely balanced background stories of the people involved—mainly Mike Daley and his one time wife, now law partner Rosie Fernandez and their kids.

This story begins with a situation that is very recognizable to parents. Their daughter Grace is 16, now dating, and they are realizing she has grown up faster than they had recognized. They are still trying to catch up with the fact that she is now a teen, doing normal teenaged activities.

Now her boyfriend is accused of committing a murder. He vehemently protests his innocence, and Grace has become his alibi—since they were together at the time the police have established for the murder.

Daley/Fernandez agree to take on the case to represent Bobby in court, but this is not easy—with a lot of unanswered questions, and knowing that eventually their own daughter might have to take the stand. As always, this is a tense, fast moving story, very engaging, and with the family issues front and center in this, also very human and appealing. It wasn’t hard to think how I would have felt as a parent with a child being involved in such a serious situation. This book, and the entire series are well worth listening. And very good narration by Tim Campbell, as well.

This author's characters repeat themselves
ad nauseam... especially when he's trying to build tension at the climax of the story. Yelling the same thing over and over does not good dialog make. He needs an editor.

I like this series very much. However, I almost didn’t finish this book. The majority of the core characters were unlikeable. Rosie’s mother, their daughter, her boyfriend, the boyfriend’s mother were all argumentative, obnoxious people. To finish the story I had to skip to the end to see if it would be worth it to slog on through chapter after chapter of obnoxious people.

Campbell was excellent as always. However, I don’t know if the boyfriend’s mother would have been as nasty & offensive if Campbell had changed her projection.

I think this may well be the best of the series. It keeps you guessing and has some surprising twists and turns.

Great courtroom drama, a murder mystery, hookers, family and cop stuff. This book has it all. Rosie, Mike, Pete, Grace, even Tommy are well developed characters. I think you will enjoy the read or the audio.

Always an interesting and fast moving story. A very realistic legal case with current social issues included. There is enough suspense and legal twists to keep you guessing. The reader is excellent. I hope this series continues beyond the niinth one as I as I would like to read another one.

I really enjoy this series.

This series is always suspenseful stick with it for an enjoyable read. Thumbs up for this one.

I almost did not make it through the first few chapters. I found myself annoyed that teenagers were addressing the 50+ year old adults by their first names, a relatively stupid reason for not wanting to continue. There were at least three or four other reasons that I cannot discuss because they would involve spoiling the book for someone reading my review. The major one was the fact that our lead characters would even consider representing their clients with such a serious conflict of interest. Oh well!

The book is still worth a credit. I’ve read several of these and it seems that like all series, they begin to drag as the author attempts to come up with new and clever storylines. The performance was just fine.