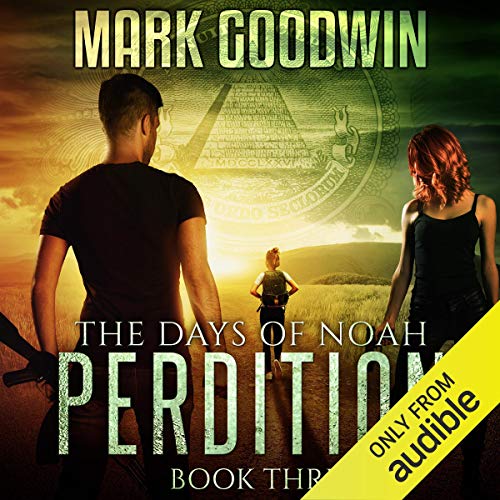 By: Mark Goodwin
Narrated by: Kevin Pierce
Try for £0.00

In The Days of Noah, Book Three: Perdition, the end times fall on America like a shadow of darkness, and the last days bring an onslaught of sword, famine, and plague. Biblical prophecies are fulfilled when a world leader arises to pull the nations back from the brink of disaster and usher in a new age of peace, but at what cost?

In the aftermath of the collapse, America is left to flounder while the rest of the world is rebuilt under the rule of the Global Republic. Noah Parker and his family refuse to take the pledge to the world order and are thereby excluded from the one-world economy, which functions using a cashless electronic currency. When the Global Republic finally arrives to begin rebuilding the former United States, Noah and the true Christian community are labeled as terrorists, hunted down like animals and forced to choose between fight or flight.

What listeners say about Perdition

These days are coming!

Enjoyed these 3 books, it really makes you think, what if! Well truly it's a good idea to be prepared for what ever happens. Having guns, ammo , extra food, $, and a plan with an organization such as churches, book club, people that you trust, that have that same feeling something could, possibly Will happen & want to unite together when all heck takes place. Of course family is you best so stay close to your loved ones.

By far one of the best series I have ever listened to. This is a powerful series written by a great Christian author. I hope he gains enough support so that he continues the series with the Book of Elijah. As always Kevin Pierces' performance is amazing.

Great story lots of good information woven into it

I really enjoyed this series, the story moves along. I am a Christian and as such I liked the premise and the development of the story. I hope this author continues the story.

I enjoyed this book and the awesome narration by Kevin Pierce. A really good ending to the end of days!

Where does Perdition rank among all the audiobooks you’ve listened to so far?

That it was believable

Yes - all of them. All are great

If you could take any character from Perdition out to dinner, who would it be and why?

Elijah - he has a great story left to tell

The poem " Wish we'd all been ready" is appropriate for the "In the Days of Noah" series.
I enjoyed all three books and know the authors preface is pretty close to what the Bible fortells.
Thanks for offering it on audable.

Loved it! Excellent portrayal of how bible prophecy might plat out in today's world. Would love to see a Days of Elijah series!

Would love a second trilogy! This is a great way to tell the story by incorporating life as it is now.

It's amazing how fast things could change. We have let the enemy lull us to sleep!