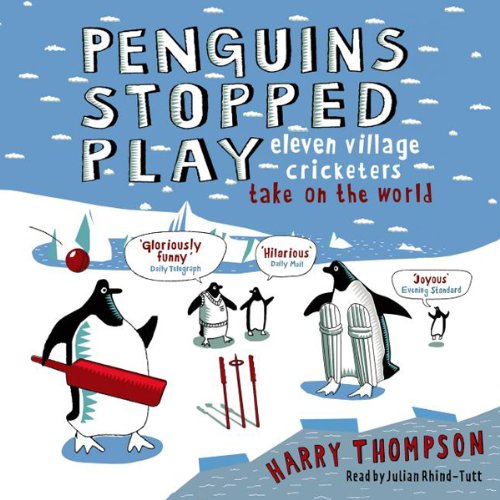 By: Harry Thompson
Narrated by: Julian Rhind-Tutt
Try for £0.00

It seemed a simple enough idea at the outset: to assemble a team of 11 men to play cricket on each of the seven continents of the globe - except that's not a simple idea at all. And when you throw in incompetent airline officials, cunning Bajan drug dealers, overzealous American anti-terrorist police, idiotic Welshmen dressed as Santa Claus, and whole armies of pitch-invading penguins, you quickly arrive at a lot more than you bargained for.

Read by Julian Rhind-Tutt (Doctor Mac from BBC2's Green Wing), Harry Thompson's hilarious book tells the story of one of those great madcap enterprises that only an Englishman could have dreamed up, and only a bunch of Englishmen could possibly have wished to carry out.

Don't get this version

The narrator was great; unfortunately thia abriged version of the book sucks a lot of the life out of the original source material.

I must admit that despite the rather moving conclusion (albeit very brief!) I found the rest of the book just washed over me with tales of middle-upper class descriptions and cricket analogies. If you’re not a lover of cricket I’d suggest you give this one a miss. The narrator was good however and did his best with the material

A must read or listen...... Funny, true, reflective, appreciative, humbling, and realisation that life is no rehearsal. Live life!
"Doing your damndest win or lose, and having your friends by your side at the end".
Buy this book or listen. For all us cricketers a great tale and probably in one way or another most our fortunate lives so far.
You cannot fail to enjoy, laugh out loud, smile inside, reflect, and a 😢 at the end will make you see just how lucky we have been to experience this game and what it has given us in friendship and experiences ☺ .

I'd more likely recommend the unabridged book as this book doesn't fully make sense and you don't get to know so much about the characters in it.

What was one of the most memorable moments of Penguins Stopped Play?

I thought Julian did an excellent job of doing all the different accents.

Have you listened to any of Julian Rhind-Tutt’s other performances? How does this one compare?

I found this book rather uninteresting and couldn't put anything into context till I read the full book. Julian does a great job with different accents but that was about all that redeemed it for me.

This is a terrific audiobook. Beautifully read and narrated and a wonderful story told with great humor. Characters abound and situations that you could not make up enhance the tale. Highly recommended

This book is charming, sad, funny and heart-warming, whether you are a cricket fan or not. The narration is very good, with just that edge of English Upper Crust.

I enjoyed this immensely and plan to share it with my husband whilst on holiday.

Go ahead and have a listen - you won't regret it.

Very amusing and well-read. Harry Thompson really was a genius - his other book, This Thing of Darkness, was absolutely brilliant. This one shows a completely different side to his character but, in its own way, is just as good. Any cricket fan will love this book - I got some very strange looks laughing out loud on the tube while listening to it.