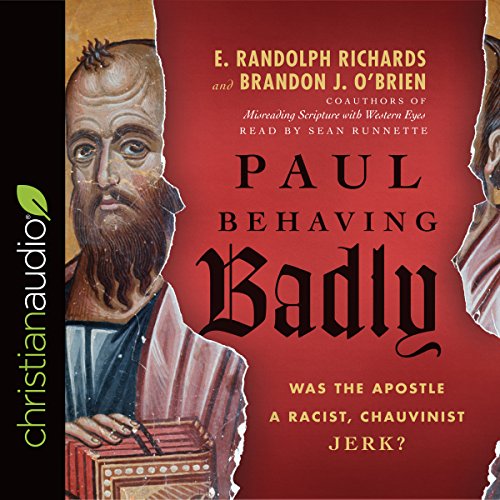 The Apostle Paul was kind of a jerk. He was arrogant and stubborn. He called his opponents derogatory, racist names. He legitimized slavery and silenced women. He was a moralistic, homophobic killjoy who imposed his narrow religious views on others. Or was he?

Randolph Richards and Brandon O'Brien explore the complicated persona and teachings of the Apostle Paul. Unpacking his personal history and cultural context, they show how Paul both offended Roman perspectives and scandalized Jewish sensibilities. His vision of Christian faith was deeply disturbing to those in his day and remains so in ours. Paul behaved badly, but not just in the ways we might think. Take another look at Paul and see why this "worst of sinners" dared to say, "Follow my example, as I follow the example of Christ."

Very interesting look at Paul’s teaching in some hotly debated subjects such as the position of women in the church. And an in- depth look at Paul’s method of using the Jewish Bible/ Old Testament.

really enjoyed the authors style, They tackle the big questions and provide some good insights. I would recommend this book.

The narration can be a little slow and the material a bit heady, but it's a great eye opener for understanding often confusing scripture.

A must read for anyone seeking clarification....

For students of New Testament texts, this is a must read. I had my biases against the Apostle Paul, because to my mind, too many men joyously took refuge in his edict for women to be silent and submit. At the same time, I was fascinated by his dogged determination to carry out the Great Commission. I can move now from bias to full admiration. He was a hero and a man ahead of his time, even as he was firmly rooted to his time. And definitely not the cold, misogynist he has been painted to be. He was a man on fire to ensure that all who heard the Gospel would have the joy and deliverance he did in Yeshua. That is awesome!

Well Measured, But Maybe Too Much

I think the book does a good job of giving a balanced view so as not to discredit the apostle Paul. I have learned from reading this book and appreciate the non-extreme, yet informative, answers and history provided. I think it is accurate to say that Paul painted a different context for Christ. The WHY, however, is not drawn out as well in this book. It is because Christ made Paul the (head) apostle of the Gentiles (Rom 11:13). He was given a different gospel from Christ. (Gal 1:11,12). Still, Christ is the center of the gospel, but the accoutrements of the gospel changed, there are none! Naturally, when Messiah is explained to Jews, it needs the Jewish accoutrements of circumcision, baptism, kingdom, prophecy fulfillment etc. I felt the book played it too safe, and especially in the realm of political correctness. It leaned too much toward embodying the doctrines of our modern day and therefore making excuse for Paul, God and the Bible. I feel they should have went more on offense against the PC culture.

Everyone who wants a better understanding of Paul should read this book. For every academic level.

I thoroughly enjoyed listening to this book. They did an amazing job. It really did make you think and helps you to look at Paul and the things he did and said from a different perspective.

I had high hopes after reading the first book by these authors - Misreading Scripture through Western Eyes - but this was a real disappointment. The authors' loyalty to St Paul doesn't allow them to follow their arguments to their natural conclusions.

A Very informative book, but listen to it at x1.15 speed for best results. as to content; the back ok is laid out clearly and is easy to understand.

A Solid Work... except for the Narrator.

I think the content on this book is quite solid. I'd prefer to never hear the narrator again. His voice was annoying and I don't think he did the research he needed on pronunciation.

Another great book from these authors. I appreciate their perspective and they do a very good job of explaining it!

This book is best understood if you have listened tHe 2 authors prior book Misunderstanding Scripture with Western Eyes. You learn how they build an argument & learn to trust their reasoning & intense desire to honor the Word of God. That said, it is a great resource for a person and a society earnestly desiring to see how relevant the Scriptures are for all people in all of time.