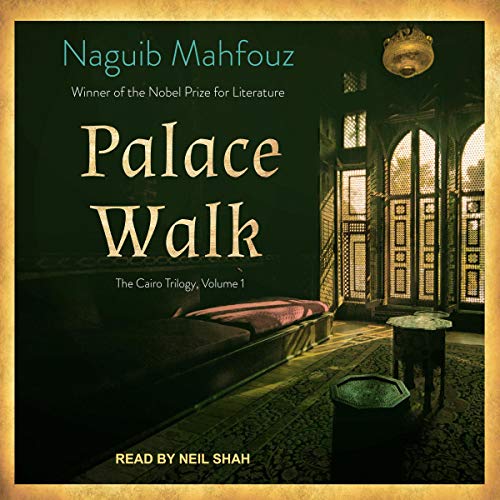 Book I of the masterful Cairo Trilogy. A national best seller in both hardcover and paperback, it introduces the engrossing saga of a Muslim family in Cairo during Egypt's occupation by British forces in the early 1900s.

What listeners say about Palace Walk

Fascinating tapestry of life in Cairo

This wonderful book takes you into a family living in Cairo during the first World War when Egyptian Nationalism was beginning to blossom behind the scenes. The family is ruled by a tyrant father but nevertheless enjoys the full complement of births, marriages and, dramatically, deaths.

high quality narrative writing truly Noble Prize winner. A must read. A reflection on the hearts and minds of an era in Egypt.

I'm sure this is a great saga and as we are living in Cairo I thought it would be a perfect read, but it took so long to get going and I realised, about three hours in, that I really didn't care about the characters and definitely didn't need to finish book 1 let alone start book 2! This is only the second book I have not finished, but decided that life is too short to waste listening to stuff you are not enjoying.

Great to re-read this wonderful book.

I reread this amazing book and got even more from it at every level - cultural, spiritual and historical. My only slight criticism, having heard it read by someone else as an RNIB talking book, is that the reader sometimes goes a little over the top involune and in long passages this can grow just a little tiresome. Perhaps a remastering could even the dynamics out just a bit. The second and third volumes lack something in comparison, and theexcellentBBC radio production is available, but it would still be worth Audible recording them .

I hope the other two books in the trilogy will be available in Audible soon.

great book, not so great narration

The book is, of course, wonderful. vintage Mahfouz. one feels like one is there, watching the story unfold.
The narration /performance, however, leaves a lot to be desired.
In Mahfouz's novels, even translated, the Arabic is important. It's messed up when the narrator is unable to pronounce the Arabic words / names correctly. Pronouncing even the author's name incorrectly is unacceptable. Even worse: incorrect pronunciations of some English words.
Furthermore, the voice, tone, accents used when narrating what people said is terrible. It reminds one of 1960s colonial movie, with stereotyped accents, screechy women's voices, etc. It's sad that this is how Mahfouz is narrated.

A timeless story never to be forgotten, beautifully told and brilliantly performed and brought to life.

I wanted so much to like this book. I had heard that it was a classic of modern Arabic literature and that it offered an inside look at the lives of middle-class Egyptians a hundred years back. What’s not to love?

As it turns out, a lot. There is very little in the way of a narrative thread holding the novel together. Indeed, much of the book might better be considered as a series of short stories all centered around one family, the household of al-Sayyid Ahmad. Eventually, something resembling a plot lurches into action, but it’s too little, too late.

The narrow focus of the book could have been an asset, allowing us to be steeped in the texture and details of people’s lives. Unfortunately, at every turn, the author misses opportunities to paint a scene with color and depth. The physical description of characters rarely rises above the level of caricature (great girth, big nose, beautiful eyes, etc.). Surroundings are scarcely described at all. The patriarch of the family is a successful merchant, yet we get virtually no description of his shop (where many scenes play out) and can only surmise the kinds of goods he sells through passing references to supplies and sales.

The novel is set at the end of World War I. British rule is being challenged by Egyptians, leading eventually to the Revolution of 1919. A number of events related to the Egyptian struggle for independence figure in the novel, but the author chooses simply to drop his characters into momentous circumstances without exposition or explanation. Although we spend a great deal of time inside various characters’ heads, we generally aren’t given insight into their motives or how their experiences shape their thinking. From one moment to the next, a son might decide to assault a servant or to join a protest while we are left to guess at why he makes these choices.

It isn’t just the lack of insight that makes the characters in this novel hard to connect with. The novel is populated with pampered, craven men, cloistered, pathetic women and abused servants. The author may have been faithfully replicating the world he was born into (Mahfouz was born in 1911 and published this novel in the mid 1950’s), but the fact remains that the reader is left without figures that command his or her interest and sympathy. The misogyny of the male characters is particularly alienating. At one point, one of the sons compares his wife to a pair of shoes. In another scene, the father blames his son-in-law for calling a doctor to assist in his daughter’s complicated delivery of a baby on the basis that the doctor’s attendance compromised the daughter’s modesty. These views may be accurate representations of cultural norms at that time, but how are we to account for the author’s apparent disinterest in the fate of his female characters? I don’t expect authors from prior eras to reflect contemporary values, but there are fundamental principles of human dignity that transcend time and place. I’m sorry to report that, by that yardstick, Palace Walk comes up short.

A final serious flaw with this audiobook is the narration by Neil Shah. For some reason, Shah and his producers decided to give Egyptian accents to the characters in the novel. As a result, they all sound a bit uncomfortable with the words in their mouths. This makes no sense, since they are supposed to be talking in their mother tongue. There is also a certain sameness to many of the voices. For instance, Shah seems to think that all Egyptian men speak in some variation of a strangled whine. The stilted delivery only serves to make a cast of unsavory characters even more unappealing.

The performance really brings it to life. However, I did not find myself carried away by the book. Despite that it really feels like a deep and unique glance into a different culture and different time, as such really worth reading.