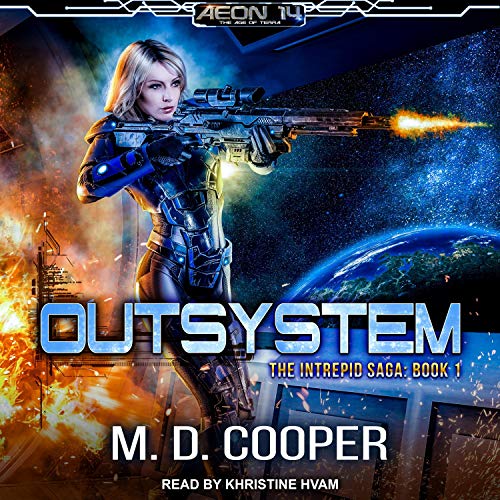 Major Richards needs to get out of the Sol System.

Demoted by the military and hung out to dry, the media labels her the Butcher of Toro. Despite her soiled record, Tanis still one of the best military counterinsurgency officers in the Terran Space Force. They need her to find the terrorists responsible for trying to destroy the GSS Intrepid, a massive interstellar colony ship in the final phases of construction at the Mars Outer Shipyards.

It'll be her ticket out of the Sol system, but Tanis discovers she is up against more than mercenaries and assassins. Major corporations and governments have a vested interest in ensuring the Intrepid never leaves Sol, ultimately pitting Tanis against factions inside her own military.

With few friends left, Tanis will need to fight for her life to get outsystem.

What listeners say about Outsystem

TL;DR Its too easy, wheres the threat?

What would have made Outsystem better?

Some actual threat or danger. I got fed up of hearing how good the main character is, because yeehawh shes the best darn tooting gal in the space army. I don't even remember her name its so boring. Its too much like recent action films where you already know that shes won before anything starts. Oh look shes saved the day again...wooo The "hook" for the story is none existent. Why do I care about a colony ship? Why would I care about a stuck up army brat? Who are these people? WHY THE F**K DO I CARE?! PLEASE GIVE ME A REASON!

Has Outsystem put you off other books in this genre?

The scene in the sample clip, actually a threat and how she got round it was interesting.

Tech level, yeah I get its supposed to be far into the future but surely there has to be limitations or negatives to all this. "Oh I need a cover? Magic liquid metal over my face thats just removed all my skin on my face. That works perfectly and OH LOOK SHES DONE IT AGAIN WITH NO ISSUES" or "Oh I got injured crawling through a vent. Regrow it" Instead its just space magic. No negatives, no threat, no nothing. Just boring hoo-ra.

I guess I'm the odd one out on this because I was not impressed with this book at all. I like the premise, I like the setting, I hate the way the main character is written. Her decision making (especially at the climax, where the only reason she puts herself in grave peril is because the book needs to wrap up soon) does not line up with what we are told about her as a capable, intelligent woman, and the romance is so forced and lacking in chemistry I thought it was part of an elaborate plot against her that would turn into a trap by the end (apparently nope).

For the same main character-type with consistent characterization and similar world-building, I happened to pick up Duchy of Terra after trying this, and found it a much more satisfying experience.

What more can you ask for in a sci-fi space opera.

First of all let me say I had originally read all these books on Kindle, now I'm going back to read them on Audible. As far as the Audible version is concerned, I enjoyed the narrators range of voices for the characters, she brings them to life including changes in Pitch and accompanied with accents for the characters. What more could you ask for in a sci-fi space opera, spaceships, space Marines, Nanotech, A eyes, world building, great character development and a fabulous new heroin. If you enjoyed the strong female heroin types that Mike Shepherd,Joel Shepherd and Michael Anderle have brought us you would love this book. I highly recommend this book I've been reading Audiobooks as for work and play for over 40 years you won't go wrong.

This was an awesome story performed exceptionally well. Can't wait for the next one! Get it now.

A must read or listen! Tactically awesome, lots of over technical jargon but easy yo follow.

This is a very nicely paced story with the right amount of down time as not to pound your senses with nonstop action. I am one book #4 quickly and #5 by early next week.

From start to finish, AMAZING book! 5 stars across the board. Sci-Fi space operas are my favorite ever since Mass Effect and this was a real treat!

To slow drags on and on.

To slow book drags on and on and on , it is very predictive and cliche. Save your money .
Not worth it.

something about this audio book couldn't keep my attention very well. the story's interesting but the writing and performance were lacking.

I am very picky about audio books because the narrator really determines a lot. Khristine does a great job and this is the first book I've listened to or read by M.D. and it was great. Great story and characters and character development. Going to head over now and get the second book.

Let’s listen to acronyms, pivotal insights from nothing, and the same trite military personalities for hours... yawn. Couldn’t finish it.