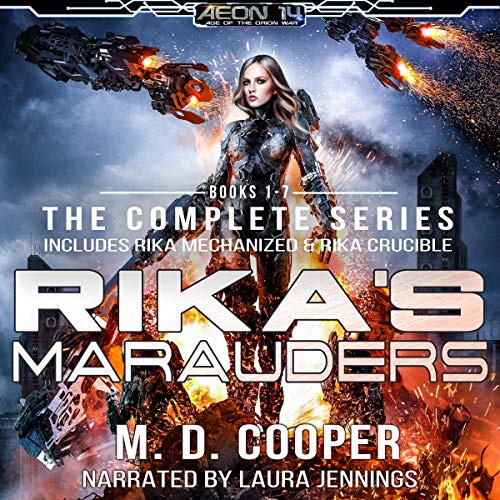 In a last-ditch hope, the Genevian mech program was founded. Its goal to augment humans into cyborg fighting machines; mechanized warriors sent to hold the front lines against an enemy that was storming a hundred worlds.

Yet few wished to undergo the brutal process, and so criminals were used, their minds enslaved by control chips and obedience enforced through discipline.

The Genevians spent their mechs against the Nietzscheans with little care, eventually struggling to find enough bodies to convert into fighting machines. Quotas were set in the courts, prosecutors, and judges paid off to ensure that even the most benign offenses would see the perpetrator end up in a mech factory, rights and mind stripped as much as body.

Rika is one such victim.

Forged into a second generation scout mech, she is sent to the front lines where she serves with distinction, crushing countless enemies beneath her clawed feet.

But, despite giving everything she had, Genevia still loses the war, and Rika is abandoned.

Now she slings cargo on Dekar, little more than a human loading machine, struggling to keep ahead of the slow breakdown of her mechanized body.

Until someone makes her an offer she cannot refuse. An offer that will see her rejoin the fight - whether she wants to or not. Rika will have to summon a strength she never knew she had to bring about the victory that she once thought was lost.

Get Rika’s Marauders today and follow the ultimate rags-to-riches story, where one woman rises up and saves not only herself, but her people.

This omnibus volume contains all seven books in the Rika’s Marauders series, as well as two novellas: Rika Mechanized and Rika Crucible.

What listeners say about Rikas Marauders: The Complete Series

i loved this series. I especially love getting a whole series as 1 credit! And better yet, it was a series I probably would've listened to even if I had to buy each one. Lots of cool tech, lots of space And planetside battles, lots of interesting characters. Great weaving together of the Intrepid's characters with this new set. I'd read a couple of the other Aeon 14 books, like Destiny Lost. etc in the Orion Wars Series. Then when I was looking for next in that series I discovered "collections " - this one, the Sentience Wars, Origins, The Sentence Wars and the one about Tanis's beginnings, The Intrepid Sagas. All have been thoroughly enjoyed and well worth more than the measly one credit I paid for them. Now to go back to the Orion Wars & restart with Destiny Lost again & hope by the time I'm caught up with what I already have, MD Cooper will have some collections of the Orion Wars so I don't have to buy each individually but can go on a nice long binge listen all on 1 credit. If you haven't run into MD Cooper's work before she's got strong female leads with strong supporting males. all the characters are well developed and you'll find yourself investing emotionally in them, while still getting your adrenalin fix of action & mayhem. A perfect mix of all the elements of a good fun sci fi I've come to enjoy. If you like the Honor Harrington Series or any of the similar female led space warriors, you'll love MD Cooper's books too.