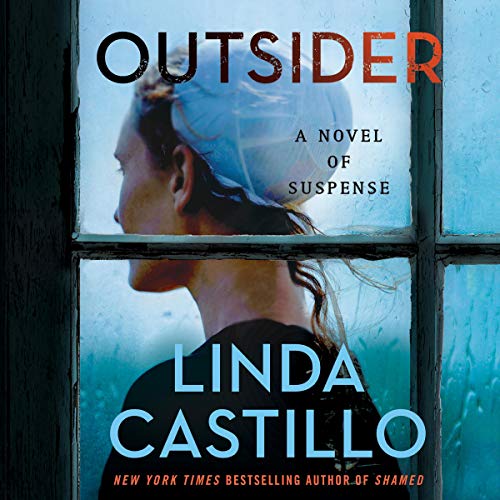 By: Linda Castillo
Narrated by: Kathleen McInerney
Try for £0.00

Linda Castillo follows her instant New York Times best seller, Shamed, with Outsider, an electrifying thriller about a woman on the run hiding among the Amish.

While enjoying a sleigh ride with his children, Amish widower Adam Lengacher discovers a car stuck in a snowdrift and an unconscious woman inside. He calls upon Chief of Police Kate Burkholder for help, and she is surprised to recognize the driver: fellow cop and her former friend, Gina Colorosa.

Years before, Kate and Gina were best friends at the police academy and patrol officers in Columbus, but time and distance have taken them down two very different paths. Now, Gina reveals a shocking story of betrayal and revenge that has forced her to run for her life. She’s desperate for protection, and the only person she can trust is Kate - but can Kate trust her? Or will Gina’s dark past put them all in danger?

As a blizzard bears down on Painters Mill, Kate helps Gina go into hiding on Adam’s farm. While the tough-skinned Gina struggles to adjust to the Amish lifestyle, Kate and State Agent John Tomasetti delve into the incident that caused Gina to flee. But as Kate gets closer to the truth, a killer lies in wait. When violence strikes, she must confront a devastating truth that changes everything she thought she knew not only about friendship, but the institution to which she's devoted her life.

What listeners say about Outsider

This is book 12 in the Kate Burkholder series. The books in this series are basically all stand alone however because on continuously developing relationships I would suggest listening to this series in order.
This book is very reminiscent (for me) of the movie WITNESS with Harrison Ford. There’s the corrupt police department. A cop trying to escape only to be injured by her dirty coworkers. A mad dash to her old friend and roommate Kate Burkholder, the police chief on an Amish community that she used to be part of.
This is an excellent series. It is very well written. The characters are fleshed out and believable. The landscape is described vividly and it has a plausible story line.
Kathleen McInerney does a wonderful job narrating.
This book has my HIGHEST RECOMMENDATION.
If you found this review helpful please indicate so.
Thank You.

One of the best Kate Burkholder novels!

This was a great one. So much suspense and a wonderful peek into Burkholder’s mysterious past. Kathleen McInerney does her usual exceptional job - I wish she could perform on a lot more novels. I strongly recommend it.

I thoroughly enjoyed the previous books, and looked forward to this one. I was disappointed with the old friend, Gina. There was absolutely nothing likable about her, and she was such a cliche. Since she dominated the story, it made the entire story one I couldn’t wait to be over. I missed Kate’s team too. They’ve always added an essential element to the stories. Ah well, hopefully the next book is back on track.

Good Addition To The Series

A Columbus cop from Kate Burkholder’s past arrives in Painter’s Mill and turns her world upside-down. Gina Colorosa fled Columbus amidst allegations of corruption with a gunshot to her shoulder. Kate is at odds to help her because of their unpleasant past and she knows that harboring a fugitive could get her into serious trouble. But a blizzard keeps them in close quarters together within the home of an Amish widower and his three kids. Kate and her partner Tomasetti’s do their own investigation into whether Gina’s claims are valid. It seems that someone is trying to frame her, but she’s not entirely innocent and Kate can tell Gina is not being entirely truthful.

I enjoyed the setting of a rural farmhouse covered with feet of snow. The weather itself is bit of antagonist here in addition to the corrupt Columbus cops. That Kate and Gina are forced to live in an Amish domestic setting for the duration of the story was quaint. And I appreciated that this plot went beyond the usual close-knit community and explored the department that got Kate started as a cop. That glimpse into her past delivered some new insight into Kate’s history. This was another solid, exciting installment in the series.

Kathleen McInerney was fantastic with the delivery of the story

Definitely not Linda Cadtillo's best work. There wasn't much to the story and it moved slowly.

Kathleen Mclnerney is a very good narrator. Linda Castillo I love your audiobooks. So easy to picture the country side in my head.

The author has chosen to have the action take place in a snow storm, primarily on the property of the Amish widower and his children who rescued a former colleague of Kate's after the woman, Gina, crashed her truck while fleeing fellow officers who are trying to kill her. As a result, readers/listeners are limited mainly to the interactions of the Amish family, Kate, Gina, and Gina's pursuers. Both the dialogue among this limited cast of characters and Kate's memories of her younger self are tiresomely repetitious, and it's fairly clear from early on how the novel is likely to end. Had I not been doing something else while listening I'd never have finished the novel. The narrator did her usual good job.

I loved this book! It was a refreshing difference from all the previous ones in the series. Having grown up as a Mennonite and having lived around the Amish community, I doubt that some of these events would have occurred. The single Amish people in that community would have worked to remove those two English women from the home of the single Amish man, quickly! But it's a fictional story so that's alright. I can't wait to listen to the next one!

as it moves, nastiness ensues

I dont like books that a vulgar, so I'm going to get rid of it