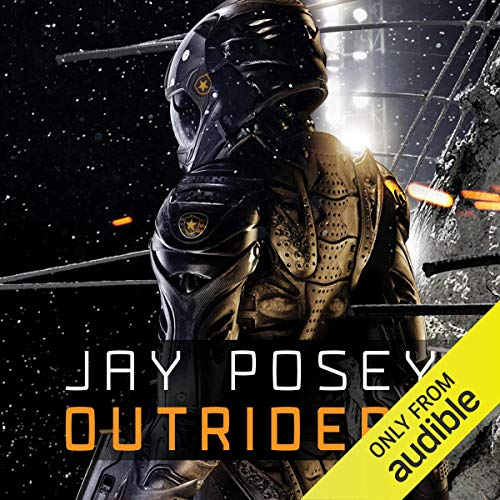 By: Jay Posey
Narrated by: James Lindgren
Try for £0.00

A daring hostage rescue leads to the discovery of an imminent terrorist attack. Thanks to the Outriders, thousands of lives are saved. Until they aren't. Despite the intelligence and the warnings provided by the unit, the terrorist attack goes off unhindered.

What was supposed to be a triumph becomes a tragedy, and a 'mission completed' completely unravels. And when they learn the reasons why, the Outriders find themselves tasked with stopping a war before it can ever start. A dangerously cunning woman who most assuredly should be dead has seemingly returned. And her plans aren't just devastating; they might be unstoppable. How do you defeat a hidden enemy when you can't let them know they've been discovered?

What listeners say about Outriders

This narrator is very unenthusiastic to say the least, does he have a cold? Very dull and lacked any emotion, almost robotic. The story was ok, expected it to be better from the reviews.

There are some great elements to this story but I struggled to get into it.

The start was good and hooked me, the end was good and wraps things up well but the middle really meanders but the main issue was I didn't buy into any of the characters which makes the whole experience flat.

Narrator was solid enough but didn't bring the story to life. Possibly better to read then listen.

Really well thought out story line that fit together well. You can tell a lot of time and thought was put into this book. The end product is a very gripping and enjoyable listen.

slow to start but good ending

slow at the beginning but good in the end so stick with it. good book can't wait for the next t

Good book, long time to get in to it

It took about 6 chapters to get into the book which I found surprising.

the book flowed nicely however you need to listen intently to follow it. there are so many abbreviations and similar sounding names that of you miss a phrase or a sentence when you get momentarily distracted... you have to go back and listen to it.

The blurb for the book is pretty much what you get

This is somewhat difficult to review, I really enjoyed the story, the characters the mission the Outriders went on…….but it was not an “Oh My God….You Have To Read This!!!!” type story that has you on the edge of your seat.  It is slow going in the building of the world and what is happening, but it is well told, the narrator was excellent and I liked listening.  I guess what I am trying to say without trying to be harsh is that there is not really anything special about this story, again I did like it, enjoyed listening but there was not really anything about it that made it stand out as a “MUST READ”, just your standard military sci-fi

The blurb for the book is pretty much what you get.  Captain Lincoln Suh was a character I liked, and the rest of his team as well, although I have to say Thumper was my next favorite character and even though a secondary character I really liked YaYa (not sure if that is correct but auidobooks don’t provide how names are spelled).

I did like how the story was broken up in to Lincoln and his teams POV, the dangerously cunning woman and her team’s POV and Pipper’s POV (she was a very interesting character).  I do wish we could have had more back story on all the main characters we are involved with throughout the story, I would have like to know more about Vector’s past before he became entangled with the dangerously cunning woman.

The narrator James Lindgren is a new to me narrator (but his voice sounds so familiar to me), he did a great job telling the story and giving voice to the characters.

If there is a second book I will plan on listening but that will be a “make it or break it” book for me.

Couldn't finish it. Narration killed it.

This seemed like a great story, or would turn into one at least, but 1:48 minutes into it and I find myself bored. This isn't an issue of waiting for something it happen, its an issue of underwhelming narration. There seems to be two types of narrators 1) someone who reads a book to you and 2) someone who acts out and performs books with passion and feeling worth of a movie. I prefer for the latter and this narrator is definitely the former. It seems many people prefer the former and if you are one of them than you will most likely enjoy this book. However, if you are looking for a performer, I'd skip it.

Fans of Tom Clancy will enjoy this. Some scenes are action packed and the science behind the world is neat.

The narrator is ok but not great. He doesn't change his voice for any of the characters so it can be confusing when multiple people are taking at points. You get used to it after awhile. Sadly while I enjoyed listening to this I recommend picking up a physical or digital version. The narrator although doing a good read, doesn't do a good enough job.

I did finish this book but only because the story was so gripping.

I Loved this book, it's SyFy but so close to how our life it's slightly scary, the reader also did very well. He has a nice voice and honestly think that he would be the voice of Lincoln. I've already begun recommending it to others I know. Now also there is a point in the chapter counting that it's counter is behind by one, also that near the end it seemed it chopped a few parts put. That is my only complaint if you wish to call it that.

I havent checked to see how far I am into this book but I may not finish it. The plot us picking up some but the Narrator is so bland it is hard to keep interest.

All the characters are sighing, and kind of bored calm even though some of the situations presented should be tense or funny. These people are professionals and military but there is no crisp snap to their answers or emotion at all.

It really breaks the immersion and tension of this book when there is zero characterization on the part of the narrator.

I think this book would be better with someone else to bring it alive.

Excellent story, not so great narrator

I really enjoyed the book. The writer tells an excellent story with awesome imagery. The narrator, on the other hand, could've used some improvement. If you ever listened to William Dufris (Old Mans War narrator) or Luke Daniels (Terms of Enlistment narrator) they give awesome life and justice to the characters in the story. James Lindgren may have a great voice, but he gives NO life to the story. He basically reads you a book and that's it. I normally don't review these things but this merited notation.

I'm giving 4 stars overall for the sake of the story, but the narration was only 3 stars at best. He's got a nice voice, but he reads everything in the same calm, even tone with very little stretching for inflection, no differentiation between characters, and absolutely no excitement. I liked the story, but I'm sure I would have liked it more if I'd read the paper version. I hope they get a more dynamic narrator for future books.

This would probably be a good read if I had time to read. But trying to listen to James Lindgren read this is very mind numbing and dull. Im not trying to knock this guy but I don't think he should be reading this genre of book.

I couldn’t put this down. I am really looking forward to the next one. Read Posey you won’t regret it.

great story could the narrator be any more bored?

i love a good Posey book. i was thrilled tge main character was asian which does not happen often enough in western culture. excellent story. hard to listen to. the narrator was so slow and monotone he sounded bored out of his mind