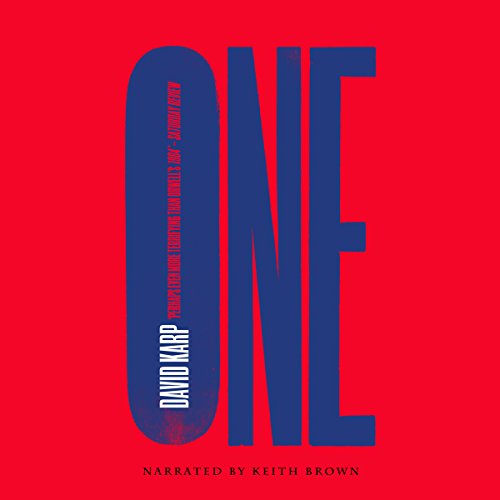 In a dateless future, a seemingly benevolent totalitarian state has eliminated poverty, crime, war, and religious intolerance and brought the happiness of conformity to its people. Professor Burden thinks he too is a loyal citizen, but the Department of Internal Examination discovers that he secretly values his individuality. Believing Burden to be a threat to the continued existence of the State, an examiner named Lark decides to cure him of his heresy and return him to being a normal, productive member of society - by persuasion if possible but by complete obliteration of his identity if necessary.

First published in 1953, One earned critical comparisons to the great dystopian novels of Orwell and Huxley. It is both a gripping psychological thriller and an indictment of totalitarianism that is more relevant today than ever before.

"The publishers have bracketed this novel with Darkness at Noon, Nineteen Eighty-Four and Brave New World, which I at first thought presumptuous; but now, after reading it, I am inclined to agree." (Cyril Connolly, The Sunday Times)

"A thriller, though physical danger is rarely present; a detective story without a detective; a vibrant chase without physical movement; and a restatement of an important ethical point which probably badly needs to be restated now. Compared to it, most of the Utopian writing of this century...is mere science fiction." (The New York Times)

I think this early review of the book by Anthony Boucher and Jesse McComas (which I lifted from Wikipedia) says it all. ".... long and tedious repetition of a tired topic, . . . which, for all its literary pretensions, neglects such literary essentials as consistency of background and motivation of characters."

I gave it 4 hours, but I couldn't take one more conversation about the deception represented by paper flowers in water!