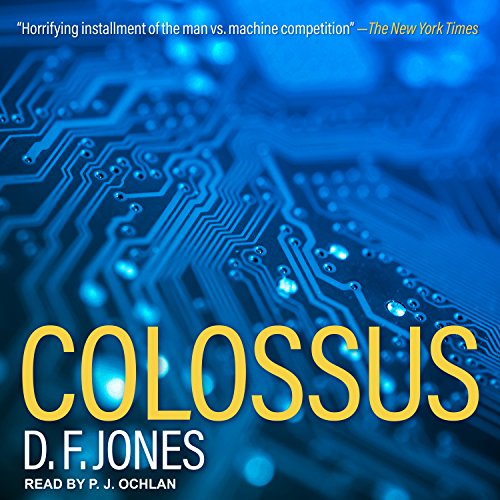 Charles Forbin has dedicated the last 10 years of his life to the construction of his own supercomputer, Colossus, rejecting romantic and social endeavors in order to create the United States' very first Artificially Intelligent defense system.

Colossus is a supercomputer capable of taking in and analyzing data rapidly, allowing it to make real-time decisions about the nation's defense.

But Colossus soon exceeds even Forbin's calculated expectations, learning to think independently of the Colossus Programming Office, processing data over 100 times faster than Forbin and his team had originally anticipated.

The President hands off full control of the nation's missiles and other defense protocols to Colossus and makes the announcement to the world that he has ensured peace.

However, the USSR quickly announces that it too has a supercomputer, Guardian, with capabilities similar to that of Colossus.

Forbin is concerned when Colossus asks - asks - to communicate with Guardian.

The computer he built shouldn't be able to ask at all.

What listeners say about Colossus

Probably best to stick with the movie for this first episode. Narrator a bit robotic, but it's ok though.

This story is a favorite of mine. I remember seeing the movie in the 1970s with Eric Braeden and Susan Clark. It is a true classic. I named one of my computers Colossus and my red laptop, Guardian.

The book seems to be fairly close to the movie or is it the other way around? I love that the voice of Colossus is heard in the audio book version. By having the voice, it gives it more of a personality. I found it funny that Colossus picked a British accent for reasons you can learn.

I enjoyed the book, although it is a bit scary. I plan to listen the rest of the series.

A wonderfully thought out story

The (newer) cover on this book really caught my eye.  I picked this up on Kindle when it was 99 cents a while back not realizing that it was an older technothriller.  When I saw that Tantor Audio was going to bring this to life on audio, I had to listen to it.

Throughout my reading of this book, I kept thinking to myself "was this really written in the 60's?" There were so many pieces that made this feel like it could have been written in the 80's or early 90's.  It reminded me of Crichton in that way.  He was able to write about things that just became normal technology way before they were popular.  Sure the "teletype" is the only dead giveaway that it was written before desktop and laptop computers took hold, but honestly, if they changed the word teletype to desktop or mainframe or anything -- you wouldn't be able to place this as far back as it was written.

Even the way that the United States (now Canada and the US combined) was run felt like it was ripped from the headlines of today, not 50 years ago.

The book itself was really believable which made it even scarier.  I found myself thinking, oh yea, this is definitely plausible and honestly should be on the mind of every single engineer who is working on AI in some for or another.

I've read other books with an AI who does things that are not expected and this was definitely as enjoyable as those books.  I can tell that Jones was way ahead of his time in the things that he was scared of.

The narration by P.J. Ochlan really lent itself well to this audiobook, he was able to voice this in a way that really made it feel like I was there while all of this was happening.  Combine that with Jones' incredible insight into what computers might become and you have a great technothriller.

If you enjoyed this review, please vote for it! Every vote helps. If you'd like to see more books like this please check out BriansBookBlog DOT com.

Before the technical world we know today ever put the two letters A and I together and seriously began to consider the implications of what a computer overlord would mean to humankind, this book and movie warned us. it is a classic that should be studied and taught in universities to caution our future leaders of the possible negative possibilities of an all-powerful non-human intelligence assuming complete control, however benevolent and beneficial it may appear.

Before Skynet there was Colossus

Take a trip back in time to the 1960s, when computers were just fancy calculators and people feared what they might someday become. This is a very entertaining novel with tension that builds slowly as Colossus gains more power and sentience.

Screenwriter James Bridges made a silk purse from a sow’s ear adapting this book into a great movie. Author DF Jones nearly ruined a great story with his clumsy character arcs, misogyny and over-reliance on a thesaurus.

The narration was a bit hackneyed but maintained a recognizable range of characters.

I recommend book first, then movie.

Storyline could be today.

Listened to this series based a reference in a blog concerning the downside of AI. The writing is simple and would make many modern Americans cringe with the stereotypes. That said, it is a cautionary tale of emergence. The AI becomes sentient with cold logic; killing thousands to protect the human race. It is a story of how emotion tempers logic through ethical and moral thought. That said, not worth the investment of time.

One of my favorite dystopias. While the technology is dated the thrill remains. It's almost like a King novel.

Forced Myself To Finish IT

Would you try another book from D. F. Jones and/or P.J. Ochlan?

Yes. I read this book and the other parts of the Colossus trilogy many years ago. They were all good reads.

I would not have changed the story.

Change THE NARRATOR. His reading of the US President was particularly irritating. He made him sound like some 1950s Chairman of the Board "Buy!!!! Sell!!!! Get it done NOW!!!! Get out of here!!!" I expected much more than trite characterizations. Forbin himself was portrayed as very "whinney" - an unexpected portrayal for a scientist who creates a world dominating supercomputer - perplexed maybe, horrified certainly, whinney not at all.

If you could play editor, what scene or scenes would you have cut from Colossus?

The part where Cleo steps out of the shower. A good story point but, entirely too much time on it.

I enjoyed this story in the following scale of decreasing enjoyment - loved the book, really liked the movie (now a low budget cult fav), barely able to finish the audio.

A story that had to be adapted for film

Colossus had to be a movie, and the story benefitted from the four years between the release of the book and the film. The fluff was cut, an overheated president character cooled down, and the technology and terminology were smartly improved. That said, it's all here with few differences, right down to Colossus's request for a voice and its infamous lines--and it has a cooler ending!

If you liked the 1970 movie version, you should find the audiobook interesting. originally written in 1966, it's still premise with some relevance to today's AI.

The narration is adequate, and the characters are acted out, so it's a pleasant listening experience.

As with most vintage Science Fiction, you have to try looking at it from the perspective of the time it was written, ignore what they predicted wrong, and enjoy it it as a retro futurism art.

Of the 3 books in the series and this is probably the best one of them. For technological based Sci Fi, D.F. Jones's work is good, but nowhere near as much as Michael Crichton's similar SciFi works of the same period, such as Andromeda Strain.

Relistening value: moderate to low. This is something that I might listen to again once every few years. It seems like rather typically mid grade SciFi of the period, interesting but not overly compelling, and lacking a lot of interesting character and story subtleties.