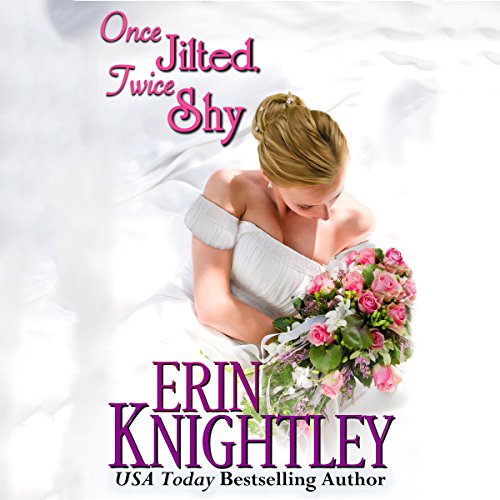 By: Erin Knightley
Narrated by: Charlotte Wright
Try for £0.00

Lady Juliette Trent has spent the months since becoming London's most notorious jilted bride in virtual isolation. When the impromptu Frost Fair on the Thames finally draws her out of her self-imposed confinement, the last person she expects to see is the very man who left her standing at the altar. But things aren't always what they seem, and when Sebastian Holmes, Earl of Haverstan, reveals his true reason for abandoning her, Juliette is determined to right the wrong that was done to them both - even if it means causing a scandal the ton won't soon forget.

This story was originally released with Heather Snow's Loving Lady Dervish in a limited time novella 'duet' called A Midwinter's Scandal. The set is no longer available, but I highly recommend listening to Heather's complementary story as well in order to enjoy the world to its fullest.

What listeners say about Once Jilted, Twice Shy

Don’t know why, but as I listened, I kept hearing the Beauty and the Beast song with Angela Lansbury’s voice singing “ there may be something there that wasn’t there before.” This was a sweet second chance regency romance as Juliette and Sebastian discover their arranged marriage was sabotaged by mysterious machinations. As they plot to discover who and why, they also discover they never actually had a clue who each other was in the first place. This is easy, clean listening, with the first of only two kisses coming in at 2hrs into this 3hr novella. Zero sex, profanity, or violence. The narrator’s measured pace benefited from 1.4x speed and provided a light, if ultimately forgettable, matinee listen.

Modern dialogue, thought patterns, and phrasing. Accents sound unnatural. It's probably a fine story to while away an afternoon, especially if it's free and if those types of this don't bother you.

Both H and H are likable. It goes quickly so is a nice listen while knitting in front of a fire. I would definitely not spend a credit. I don’t understand how they charge whole credits for short little books. I had it as part of audible and it was fine. Oh boy do I miss audible escape!!!

It was a rough road, but the glue was to find out who did it.

Quick, cute story. I wish that it had been longer with more character development. With that said, I still enjoyed the story. The narrator left a bit to be desired.

I loved this second chance romance. It’s something I’m drawn to and I love a bit of mystery as well. This was perfect all around.

I enjoyed her voice but I understand if others find the lisp or feedback distracting. If it was just the microphone investing in one without the sound would be a good idea. If it is a lisp it is a wonderful choice to take a voice role to work on it. Bravo!

Beautiful little story of deception and reconciliation, First from this author, will look at others that she's written

I made it through to see if there was more than 2 kisses.... nope. Way to sweet and clean for me. Good thing it was free.

How lovely! There are really no heroes or villains in this story. Just human beings trying to do their dead level best in sometimes difficult and sometimes wonderful experiences of life.