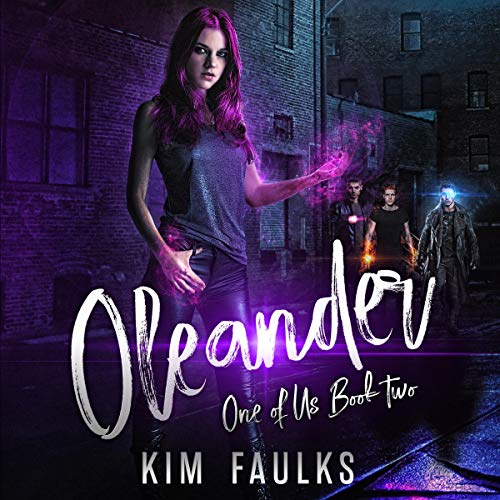 By: Kim Faulks
Narrated by: Harmon Gamble
Try for £0.00

There’s a fine line between a hero and a monster.

I'm not like you. Not good. Not human. They call me Oleander. Toxic and deadly. I killed my first human when I was nine years old...and I'll kill many more. Because, humans just won't leave me alone.

Hiding with three just like me. Shadow, Tex, and Sixth. We're on the run because of what I've done - and what I am.

That's what they tell me. But Oleander isn't just deadly, it's noxious...growing and spreading poisoned roots through this world.

I want to believe I'm the good guy.

But what if I'm not? What if humans are right? What...if I'm the monster?

What listeners say about Oleander

I’m still not 100% on this storyline. I’m very confused as to what these characters are trying to do. It’s got good content and lots of action I’m hoping that in the last book everything will slot into place. Great narration

This was something a little bit unusual but I'm glad I decided to try it. I was immediately drawn into the story from the get-go and it never let up until I had finished it. Fantastic storyline.

The narrator showed real empathy and invoked many feelings whilst listening to their voice.

This book was so good! I was pulled in from the start and loved it!

This is a good but dark fantasy. I really likes it, and the narrator did a great job bringing the story to life.

Really great Series so far.This is the second book in this series I must say it is one of the best I have read in a while! Oleander kept you engrossed waiting to see what would happen next. She has such a hard time controlling her powers Loved the emotion this book pulled out of me if you like shows like the gifted you will love this series now to wait for the next one !