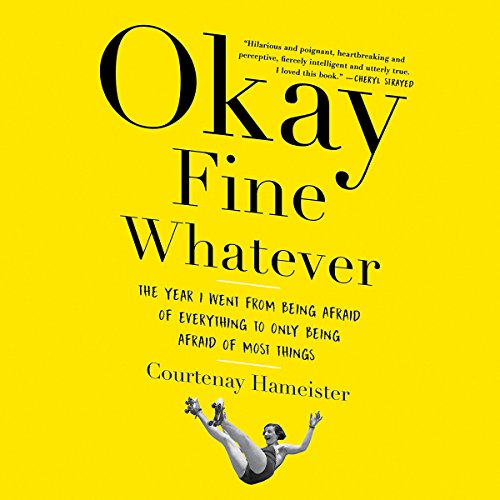 The "hilarious and poignant" story of one chronically anxious woman's year-long quest to become braver by seeking out the kinds of experiences she's spent her life avoiding. (Cheryl Strayed)

For most of her life (and even during her years as the host of a popular radio show), Courtenay Hameister lived in a state of near-constant dread and anxiety. She fretted about everything. Her age. Her size. Her romantic prospects. How likely it was that she would get hit by a bus on the way home.

Until a couple years ago, when, in her mid-forties, she decided to fight back against her debilitating anxieties by spending a year doing little things that scared her - things that the average person might consider doing for a half second before deciding: "nope."

Refreshing, relatable, and pee-your-pants funny, Okay Fine Whatever is Courtenay's hold-nothing-back account of her adventures on the front lines of Mere Human Woman vs. Fear, reminding us that even the tiniest amount of bravery is still bravery, and that no matter who you are, it's possible to fight complacency and become bold, or at least bold-ish, a little at a time.

"Inspiring from the first pages. Courtenay fearlessly lets us into her head; she didn't clean up in there before company came over, and I am so glad. Her risk-taking adventures in career and love are more stirring to me than any daring physical feat." (Jen Kirkman, New York Times best-selling author of I Can Barely Take Care of Myself)

"Courtenay Hameister is one of the funniest, sharpest writers I know. Her work is confessional, witty, and laugh-out-loud hilarious. I love her."(Chelsea Cain, New York Times best-selling author of Heartsick and One Kick)

"The author not only chronicles how she faced her inner demons and won; she also offers a reminder that doing even the smallest thing to conquer fear 'is enough to change a lot.' A fresh, intelligent memoir." (Kirkus Reviews)

What listeners say about Okay Fine Whatever

Hilarious, relatable and oh so entertaining!

Loved it! Listening to Courtenay's adventures and inner thoughts made light of own anxiety and discomfort towards the most mundane (or extreme) of social situations. Hilarious, relatable and oh so entertaining!

Reading this was fun and not uncomfortable at all.

While she didn't try to inspire me, she did. I feel like this gave me an interest in exploring but also a better understanding of those who find it really hard to put themselves put there.

Courtenay has a way of describing what it’s like to live with anxiety in such a funny way! Her dry sense of humor and adept sarcasm are everything! If you suffer with GAD or have someone in your life who does, this book is for you.

If I wanted to hear the intimate details of someone else's sex life, I'd buy a magazine at the local gas station. Was tricked into thinking that I'd get a more enlightened experience of dealing with GAD. Waste of a good sense of humor. Pass.

I feel that this is an amazing book for people with and are overcoming an anxiety disorder. The author's story is inspiring.

I loved the honesty and felt I could relate on many levels although we are in completely different careers and our lives look very different. I could feel myself living vicariously through her stories and wondering what it would have been like to be in such situations. It made me evaluate what I am afraid of, and pushed me to consider what I could learn or accomplish by saying Ok, fine, whatever to. Well told.

Book Rec: a funny memoir featuring generalized anxiety disorder, body image issues, late blooming sexuality, food issues, and plenty of deep and light-hearted real-life stories of personal growth. I identified with much of this book and I'm glad I listened to it.

Loved her honest story telling. Such and rawness mixed with subtle sarcasm made this book a great listen. At first listen I was afraid it was going to be a generic 30-something fling book but after only a couple chapters- the author drew me in. Suddenly I couldn’t wait to hear what her next adventure would be. Great book Courtenay, you’re def a badass lady.. don’t forget that. Wish to embody your courage and thrive!

Fun to listen to and a great narrative performance! Was hoping for a bit more exploration on "how" to get through the fear other than take tiny steps and just do it, but maybe that's all there really is for an answer to how to get braver. :)

A hilarious, unusual and inspiring journey to self betterment

Courtenay’s story is so relatable because we all have insecurities, fears and a lizard brain that sometimes tells us there are sharks in the deep end of the pool. But we also all have the choice to let those things dictate our lives, or push past them - and hopefully end up a better version of ourselves.

Courtenay had the bravery to kick anxiety and self doubt to the curb through some unusual and interesting ways. A few of her adventures were definitely out of my own comfort zone but still fascinated to listen to and I even learned a thing or two — like who knew that “poly guy” is not how you describe Bill Paxton’s character in “Big Love” but actually an “average Joe” walking around Portland, Oregon?

The best part is how Courtenay shares her experiences with honesty and a large helping of humor. This whole book is absolutely hilarious. Laugh-out-loud-while-running-on-the-treadmill-at-the-gym hilarious (hopefully fellow gym goers think , “I’ll have what she’s having,” and not “wonder what’s wrong with that person”). Definitely worth a listen!

Wonderful Narrative for Anyone with Anxiety

The book was so funny any relatable! As a person with social anxiety and panic disorder, so many of the situations felt like they were possible scenarios from my life!