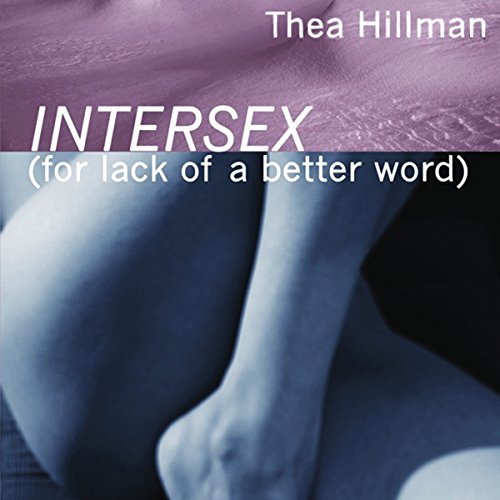 Intersex (For Lack of a Better Word)

Intersex (For Lack of a Better Word) chronicles one person’s search for self in a world obsessed with normal. What is "intersex"? According to the Intersex Society of North America, the word describes someone born with sex chromosomes, genitalia, or an internal reproductive system that are neither clearly male nor clearly female.

In first-person prose as intimate as a diary, Thea Hillman redefines memoir in a series of compelling stories that take a no-holds-barred look at sex, gender, family, and community. Whether she’s pondering quirky family tendencies ("Drag"), reflecting on "queerness" ("Another"), or recounting scintillating adventures in San Francisco’s sex clubs, Hillman’s brave and fierce vision for cultural and societal change shines through.

"In Hillman’s world, the surer you become about who you are, the more vulnerable you get." (San Francisco Bay Guardian)
"Hillman’s writing is sexy because it’s smart and refuses to simplify things." (Fabula)
"Hillman's utterly unabashed memoir...showcases both the personal, embodied realities of intersex, and the social and political milieus that shape them.... Intersex, too, is gorgeously written." (Women's Review of Books)

What listeners say about Intersex (For Lack of a Better Word)

Inspiring Writing for any Gender

This is great storytelling. I was captivated by Thea Hillman's frank and vulnerable voice. She is sexy, scary, and funny... all at once.

Intersex is the first-hand account of being an intersex activist, and it will give courage to people of any gender. Thea writes, "Normal is a weapon of mass destruction. It's just as deadly, and just like those weapons, it'll never be found."