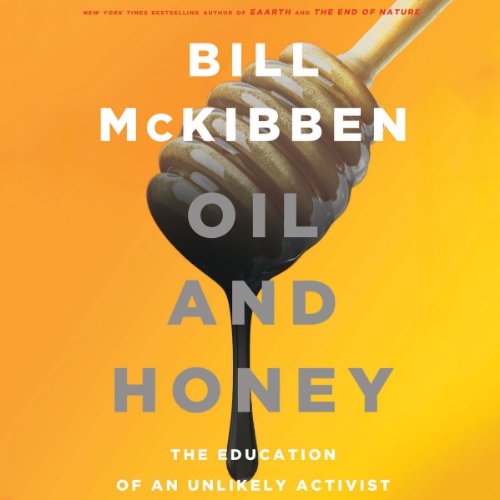 Best-selling author and environmental activist Bill McKibben recounts the personal and global story of the fight to build and preserve a sustainable planet.

Bill McKibben is not a person you'd expect to find handcuffed and behind bars, but that's where he found himself in the summer of 2011 after leading the largest civil disobedience in 30 years, protesting the Keystone XL pipeline in front of the White House.

With the Arctic melting, the Midwest in drought, and Irene scouring the Atlantic, McKibben recognized that action was needed if solutions were to be found. Some of those would come at the local level, where McKibben joined forces with a Vermont beekeeper raising his hives as part of the growing trend toward local food. Other solutions would come from a much larger fight against the fossil-fuel industry as a whole.

Oil and Honey is McKibben's account of these two necessary and mutually reinforcing sides of the global climate fight - from the center of the maelstrom and from the growing hive of small-scale local answers. With empathy and passion he makes the case for a renewed commitment on both levels, telling the story of raising one year’s honey crop and building a social movement that’s still cresting.

Includes a bonus interview with the author.

What listeners say about Oil and Honey

Informative and entertaining. Easy to follow and educational. Powerful and thought provoking. could change your would. Recommended.

Would you consider the audio edition of Oil and Honey to be better than the print version?

Easy listening, but handy with a computer nearby for research.

What was one of the most memorable moments of Oil and Honey?

Speaking about the rise of the 350 movement on a global scale (fighting for the environment, against the Keystone Pipeline in particular), and the plight of bees and his efforts on a local level (interspersed with personal notes on meetings with important figures or events, etc.) made for very interesting read. I unfairly presumed this would be a dry read/listen, but feel far better informed, and even entertained after having read this.

Which character – as performed by Kevin T. Collins – was your favorite?

I am, at this moment, restarting my efforts to cause Oregon to divest from fossil fuels. :)

A life threateneing challenge for earthlings

Where does Oil and Honey rank among all the audiobooks you’ve listened to so far?

McKibben debunks climate change deniers with hard data that is easily understood. The overabundance of fossil fuels, specifically known oil and gas reserves. The data does not consider supplies from fracking, tar sands, shale and coal. We can burn up our planet many times over and turn our atmosphere into one like Venus that will not sustain our life forms.

When deniers say to me that these events have occurred before and the planet has survived, I have some factoids: specifically, this number of extreme weather events has not occurred during the last 120,000 years. The number of extreme events is compounding each year as global temperatures rise.

This book is a good tandem for The Sixth Extinction.

McKibben a Great Man; His Book Good but Not Great

The emphasis on bees and honey is a stretch., detracting from what the book is about. The reader ends too many sentences with question marks.

Authors personal story about his struggle with Keystone Excel and beyond.
I'm not sure what I was expecting but it was not this.

The last chapter is cut off at the end of this recording- so disappointing! Amazing book.

Well told story of climate change and the power of community action.

Great interplay between bees and the state of our world to understand climate change, people influencing decisions, and our collective ability to take action.

I loved this book. It was a pleasure to read. Bill McKibben is humorous even as he faces the end of the world as we know it. Knowing his struggle between activism and building sustainable decentralized local economies helps me to navigate my own. The audio seems to cut off abruptly in chapter 7 but maybe that's just how the book ends. I would have expected more of a conclusion...

A very important book for these changing times

This book so clearly illustrates the in consciousness of our current capital system and what we can do to address the coming global situations. 350.org has built a powerful movementand I really respect Bill McKibben.

First half is great

What made the experience of listening to Oil and Honey the most enjoyable?

The first half of Oil and Honey is very interesting. It is encouraging to hear about Bill McKibben's struggles and thoughts about becoming a climate activist: it is rare to hear people talk about their doubts.

The current available download (8 hours and 39 minutes) is only the first half (or so) of the book. The download ends mid-paragraph. Until Audible fixes their audiofile, I can't speak to the quality or interest of the rest of the book.