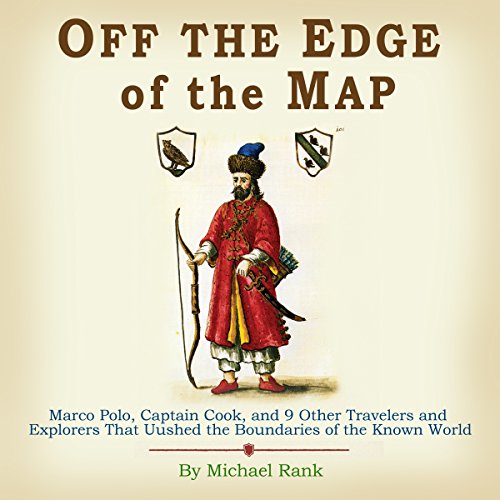 Off the Edge of the Map

By: Michael Rank
Narrated by: Kevin Pierce
Try for £0.00

From the #1 bestselling author of History's Greatest Generals comes an exciting new book on the greatest explorers in history and how their discoveries shaped the modern world.

Whether it is Rabban Bar Sauma, the 13th-century Chinese monk commissioned by the Mongols to travel West form a military alliance against the Islam; Marco Polo, who opened a window to the East for Europe; or Captain James Cook, whose maritime voyages of discovery created the global economy of the 21st century, each of these explorers had an indelible impact on the modern world.

This audiobook will look at the 11 greatest explorers in history. Some travelled for religious piety, such as Ibn Battuta, who travelled from North Africa to Indonesia in the 1300s, visiting every Islamic pilgrimage site between - and becoming counselor to over 30 heads of state. Others travelled for profit, such as Ferdinand Magellan, who wanted to consolidate Spain's holdings on the spice trade. Still others travelled for discovery, such as Ernest Shackleton, who led two dozen men to the bottom of the world in an attempt to cross Antarctica on foot.

Whatever their reason for discovery, these explorers still inspire us today to push the limits of human achievement - and discover something about ourselves in the process.

What listeners say about Off the Edge of the Map

I enjoyed the stories about the explorers and their journeys. The presentation was clear and concise and tried not to be sensationalistic or overplay any part of the tales, which was perfect. Well written stuff, thanks Michael!

My sole criticism is with the performance. The narrator makes no effort to try to pronounce non-English names or places words correctly. It would be forgivable once, but it happens nearly every time a non-English name comes up.

But that's minor compared to the content of the book. I found the book to be a perfect introduction to each explorer. Actually, I wish I'd gotten the paper version so I could read the bibliography, because now I've got to find some books on Ibn Battuta and Richard Burton....

You won't fall asleep while listening to this book

What did you love best about Off the Edge of the Map?

There are so many little-known facts about famous and not-so-famous explorers mentioned in the book that one could hardly find in textbooks and on wikipedia.

That was Captain James Cook that has left a legacy of scientific and geographical knowledge which was to influence his successors well into the 20th century and whom I consider to be a role model.

That was just fascinating to learn of of so many extraordinary people and little-known facts about them.

I would recommend to everyone who is interested in history to purchase this book. There won't be any regrets afterwards.

I was disappointed by the way impressive feats of great explorers were listed in an almost boring way. If you are looking to be inspired by these travellers be ready to be disappointed

The book captures your imagination as you travel with the extreme challenges these great explorers faced.

This is a history book. It reports on a number of famous explorers most of us have heard of, but really don't know much about. I thought it was fascinating. It contains quite a bit of detail about each, but not so much as to get boring. Well narrated.

This was a quick overview of impressive travels accomplished by several explorers. It provided almost a "Coles Notes" version of the travels. Good for identifying my next area of historical travel adventure research.

Great stories of history's finest adventurers. An excellent listen. Was worth the credit for sure. Learn something new today. Wow