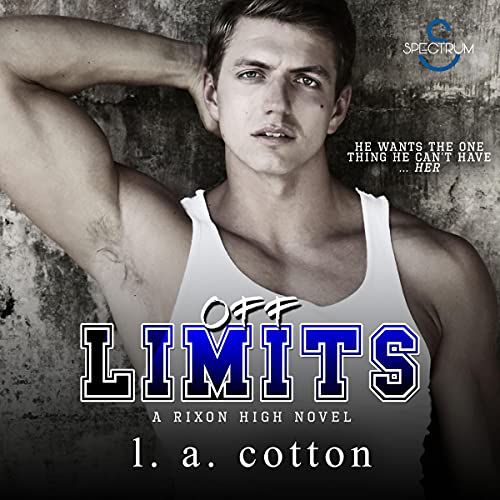 By: L A Cotton
Narrated by: Meghan Kelly,Matthew Maddux
Try for £0.00

Lily Ford has always been a wallflower. But it’s senior year, and she wants nothing more than to try to push her boundaries and embrace the last year of high school.

Kaiden Thatcher has always been the star on the football field. But now he finds himself in enemy territory forced to prove himself to his new coach and teammates.

It starts with a dare. Seven minutes of heaven in a boat shed. But it quickly turns into something neither of them saw coming.

He’s everything she should resist.

She’s everything he shouldn’t want.

But neither of them are willing to walk away because together, their demons seem that little bit easier to silence.

There’s just one problem: Lily is the coach’s daughter.

What listeners say about Off-Limits

Lily is quite shy but in her senior year she’s trying to test her boundaries . Kaiden has always been the star of the football team but when his team mate set a dare for him it turns into something neither of them expected . Really enjoyed listening to the start of this new series and looking forward to more .

This is a cute book. High school sports romance. I like that there is not a lot of separated time between the main characters. Kaiden’s character is amazing. I sometimes wanted to strangle Lily. We are definitely dealing with teenagers. I assume the last epilogue gets you ready for the next book. The narration was great except for some technical issues with the recording though nothing too bad. I recommend this book. 🎧 Audiobook Obsession

Wow Kaiden is not what I expected at all, I fell in love with him from start to finish.

Lily is so sweet and I was wondering what happened to her from Avery book and I glad that wait over. The book has learnt me about a condition I didn’t know existed and how much someone must go through with that.

If Jason is a favourite like he is mine, you will not be disappointed because Jason Ford as a dad is hot hot hot! Plus their relationship still being like it was is just amazing got to love seeing them as parents.

I love the set up for the whole series and all the theories coming to mind. I can’t wait to get into each and everyone of them.

I really enjoyed this book. I love a good sports romance. Then add a dash of Romeo and Juliet forbidden relationship. Lily has not had an easy life growing up. She has been bullied throughout school. Kaden is the bad boy from the other side of town. That episode left me needing Peyton's book! Meghan Kelly and Matthew Maddux did a great job narrating.

Fantastic start to this next Rixon High series!

I absolutely loved the Rixon Raiders series, so when this audio popped up, I was thrilled. LA Cotton delivers a twist to the high school drama by having the Raiders' rival football team meld with their roster due to a fire. Now these athletes need to learn to live and play together. It effect Kaiden Thatcher the most. He is new, and the quarterback. It's his senior year and he is hoping to get a scholarship. But this could change everything. If there is no play time, his talent may be missed. Plus there is an old grudge between the coach and his father. Lily is just hoping to get through her senior year. Being invisible has been her mantra and she is hoping it stays that way. With her football coach father, it's not that easy though and his protectiveness can be overbearing. When she catches Kaiden's eye though, things are about to change. Can these two teenagers find their way to be together? Will Kaiden get his day on the field? LA Cotton is a master at high school drama and romance. I was sucked in and down for the count as I listened to their story. Lily is a fascinating character.She has been through a lot, and her journey is just beginning. I love watching her grow and change. Kaiden is that one we all loved in high school. He isn't worried about status, and is a genuine person. It's a fantastic start to this series and the glimmer of Peyton's story is just a tease! I can't wait to hear it!

Meghan Kelly and Matthew Maddux make a wonderful narration team. These two have fantastic voices for a new adult series and give it just the right amount of angst to not be over the top. I enjoyed the way their voices complimented each other. It's a great listen and one you should definitely pick up.

Fabulous, amazing, entertaining, well everything you want in a high school sport romance series. We had a prequel to it and was a fantastic insight into what was to come, but it didn't do it justice, this book was amazing. I am loving the characters of this Rixon Raiders Next Generation. Lily the shy girl with a bad past finds herself in a situation where she gets Kaiden Thatcher, the quarterback, but nothing is easy and they are things that will prevent them from being together. As always we get the full angst and drama situation that you will be addicted to, I definitely look forward to reading the rest of the series, I am so intrigued as to how this will all pan out, I love the first generation series, and this one is starting with a blast to overcome the first one as my favorite one. Brilliant story, characters, and plotline, can't wait for the next one!

Stopped listening to it

Sorry I just couldn't listen the narrators so I stopped it. I might attempt sometime in the future to read it but this audiobook just wasn't for me I guess.

It is great to be back in L.A. Cotton’s “Rixon” again, I was happy to hear there would be more “Rixon Raiders” novels with characters from the second generation. And the best way to start the series is with Jason Ford’s daughter and Lewis Thatcher’s son as the lead characters, the two were rivals back in the day and not just in football, Thatcher was from Rixon East and Ford from Rixon High. With Rixon East HS burned down all the students needed to transfer to other schools, Kaiden Thatcher, the Eagles star quarterback chose to go to Rixon High despite knowing they already had a QB and that the coach, Jason Ford and his father were rivals. Caiden’s dad was a bully back in his day but he is nothing like his father, he does not get along with his father who is an abusive drunk. It is kind of tough transferring to a new school for senior year but Kaiden has one goal to catch an eye of a scout and get a scholarship for college, far away in Alabama, one of the top colleges for football. Lily Ford likes to keep to herself and stay in the background, she has a wonderful family life, great mom and dad, sister and best friend Peyton. Trauma in her past damaged her, she suffers from anxiety and has other issues. She does well most of the time but certain situations trigger her anxiety, certain people too, like one of the mean girls in school, Lindsey who has bullied her in the past. Caiden and friends are not welcomed on the team, even the coach put him in the second line, when he first gets his time on the field the others shun him. Girls are interested in him because he is a football player, he has Lindsey going after him too, but he only has eyes for one girl, the girl in the shadows, Lily. I loved these two together from the moment they met, they both really saw each other for who they were and got each other too. But when Caiden found out she was the coaches daughter she became off limits to him. The chemistry between them is undeniable and it was only a matter of time before he gave in again. Caiden catches a break with the team, not in the way he wanted it but he does get to play and shine for scouts to see him. These two faced a lot of challenges, some their own some from others. Caiden had a good head on his shoulders and a big heart, his patience with Lily was impressive, so was how much she grew into her own by the end. I loved how everything played out in this book, the story is beautifully plotted with plenty of drama, angst, heartfelt and emotional moments and a wonderful slow burn romance. L.A. Cotton, thank you for another awesome story and emotional rollercoaster ride.

🎧📚🎧 And for the fabulous narration, Meghan Kelly and Matthew Maddux are talented narrators and versatile voice artists. They bring the characters to life, humanize them, give each their own distinct voice and personality, as well as heart and attitude. Their portrayal of each character was spot on, they took each role and made it their own sounding believable and just as I pictured them to sound. Meghan Kelly’s played Lily’s role with perfection and Matthew Maddux did the same for Caiden. Both are great performing the roles of the secondary characters as well. They set the perfect tone for the story, capture all of the characters emotions and project them into their performance. They are entertaining storytellers and a pleasure to listen to. Thank you for the awesome listen🎧

Best freaking sports romance I've ever listened to. I don't like this genre but loved this book. 💙💙💙

Off-Limits audiobook narrated by Meghan and Matthew is amazing. I absolutely adored Kaiden and Lily. They fit each other perfectly and I couldn’t get enough of them. Their chemistry is epic and seeing Jason as a dad is the best. I love this series and I can’t wait to listen to the next book in The Rixon High series.