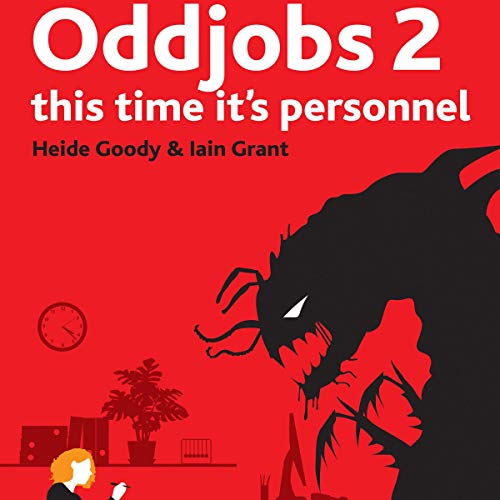 The Venislarn. Vastly intelligent aliens from another dimension or dribbling insane gods from a distant realm? It’s impossible to tell. What’s certain is that they’re here and they’re going to destroy our world. But, hey, there’s no mileage to be gained from telling the kiddywinks that monsters are real….

The consular mission to the Venislarn are the god appeasers and the end-of-life carers for an oblivious planet. It may be the end of the world as we know it, but there are procedures and policies in place, and everything should go according to plan. But, in the city, someone’s buying souls door to door, dealing in the kind of magical drugs that guarantee a really, really bad trip, and if something isn’t done about it, the end of the world might just happen a lot sooner than planned.

Sequel to the hilarious Oddjobs, this is a workplace comedy like no other, featuring face-eating grannies, telepathic spiders, bloodthirsty school kids, murder on the dance floor, sex-crazed pond life, and actual stockbrokers from hell.

The weekend can’t come soon enough (if it comes at all).

More Gods, gigantic prawn spiders, Steve the Destroyer and plenty of laughs! Cant wait for the next book.

Been waiting for this for ages!

I loved the first book and have been very impatiently waiting for the to be released. The narration by Matthew Lloyd Davies is wonderful as he brings to life both the ordinary and the extra-ordinary. Whilst I know it's easy to compare this to Douglas Adams I think that Goody and Grant have found a voice of their own. The story is compact and yet encompasses the universe and is easy to get into. I don't think it's laugh out loud as much as quietly amusing with fantastic observational humour and a clever internal voice for all of the characters. Excellent!

I thoroughly enjoyed this book and it’s predecessor. An excellent cast of characters and a well paced story. The narrator is excellent. For comparison purposes, the closest I can get is that it reminds me of early Tom Holt. Made me laugh out loud, and I keep quoting bits of it.

Better than the first book! Couldn't stop listening. The narrator gets top marks... must have a throat of steel! Hope Steve the Destroyer becomes a regular in the series. Looking forward to the next book!

Now that was fun and exciting. I just love all the characters and the adventures or shenanigans they get up to. I am hoping more is to come soon. Fingers crossed for another book in the series.

I really love Oddjobs. This series has everything to keep me entertained for hours. Quirky but relatable characters, fast dialogue and monstrous situations. It’s all hilariously funny. I hope this series is a lasting one. I can’t wait for the next instalment.

Second in the series. All of the entertaining (and well defined) characters from Oddjobs are back, at least the ones that survived. Now a search is on for a replacement employee for one who had not made it. Meanwhile the reader meets a face eating granny, who can make you disappear if she forgets about you, what is left of the fishboys gang from the first book, and a neighborhood full of upper middle class monsters who live to impress their neighbors.

As fun as one

This book continues the story begun in odd jobs one, and is a great deal of time. The characters have not significantly changed, nor has the impending doom of the planet. It no one allows that to get in the way of them doing the job that they think they need to be doing. You enjoyed odd jobs one you will enjoy odd jobs number two.

Love this series! Reader makes a hilarious cast/plot into people you wish you worked with! Can't wait for the next one! Great job all around!!