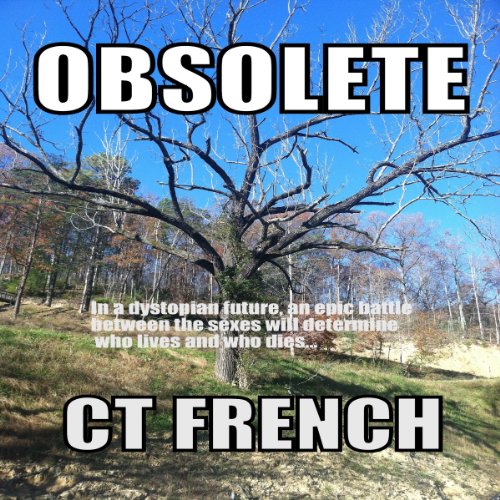 Book 1 of the Obsolete series

In a dystopian future, an epic battle between the sexes will determine who lives and who dies.

After the Blue Pox pandemic wipes out 99.99 percent of males and 99.95 percent of females, the majority under the age of 50,18-year-old Madison wanders the countryside, lost and alone. She joins forces with Katherine, a former anthropologist, in search of a safe place to live, and the two find a group of women gathered on the campus of a small college in East Tennessee. Katherine quickly establishes herself as leader and under the influence of Callie, a former prison guard, begins to imprison men, whom they refer to as the "others", for what Madison perceives can only be nefarious reasons. When older and weaker prisoners start mysteriously disappearing, Madison suspects Callie and her band of deputies are killing them. After a pregnant woman joins their commune, Callie and Katherine, aware that females outnumber males and hoping to create a new world ruled by women, make plans to build their community and attain power. They devise a procreation policy, mating the younger women with the healthy male prisoners, and Madison must make a decision to either stay and become puppet to their plans or make her way alone in a desolate, violent world. But before she can do so, she meets Jonah, a young man captured by Callie, and Madison finds herself caught between her love and loyalty to Katherine and her attraction to Jonah. Madison is forced to make a harder decision: To stay and condone what Callie and Katherine are doing or risk her life and escape with Jonah.

The novel is all about what can happen in a world ravaged by disease, especially when the power structure is recreated in such a way that one gender is in control of the other.Ruled by Katherine, a kindly but strong woman, and her harsh sidekick Callie, it soon becomes apparent that the thirst for power has created a new kind of evil in this community that was supposed to be a strong but kinder world.

A terrific post-apocalyptic tale of female vs male

* I received a free copy of this audiobook in exchange for an honest opinion.

Madison is one of the only survivors from the Blue Pox. In the span of a few months this disease wiped out 99% of the male and 99.5% of the female human population.

Somehow the Blue Pox even crossed species and infected and killed much of the animal population.

Survivors have banded together in camps and communes.Eighteen year old Madison lives with 500 other women on a commune in Tennessee. The commune is located in what was an eco-experimental university campus with solar and wind power.

The eco-friendly accommodations are not the only unique thing about her community. The most unique thing about where she lives is that is a solely woman run camp. The vast majority of the population is women and what few men there are, are all prisoners kept alive for the purpose of slave labor and eventually for procreation.

When a pregnant young woman named Sarah arrives with her male partner Madison begins to question the morality of their "all woman" policy. Men are referred to as "Others" and seen as enemies.

Madison loves Katherine who also happens to be the commune's leader. Katherine saved Madison's life and her sanity when she found Madison wandering lost, alone and in despair over the deaths of her parents in the aftermath of the Blue Pox pandemic. In fact, they arrived at the compound together and Madison views Katherine as her surrogate mother.

When Katherine informs Madison that they are instituting a new procreation policy and that Madison will be expected to participate, cracks form in their relationship.

This is a gripping and emotional roller coaster of a story that will make readers (listeners) question what they would do if they were in Madison's situation.

I love the fact that while this is a fiction story, it tackles some of society's issues and makes the listener think. There are many social, emotional and moral topics explored in this book.

Carla Mercer-Meyer has an excellent voice for narration. She does not 'try-too-hard' which is something that I find many narrators do. Her voice does not take over the book, but instead it draws the listener into the story. I was impressed with her narrative skills and highly recommend her.

I rate the narration and the story both as 4 out of 5 stars and I will be recommending this audiobook to my friends. It is available for download at www.audible.com

C.T. French is short for Christy Tillery French. She is an award winning author and poet who writes mostly about women from the southern United States.

Although this is not a genre I normally read (this book was gifted to me), I found the plot of the story interesting. The main character, Madison, was well developed, and I liked her, although her stubbornness sometimes irritated me. The writing was smart, and flowed well. I probably would have given it 5 stars, but I hated the ending. I wish it had ended a chapter earlier. The narrator did a wonderful job. I appreciated the distinct, but subtle differences in the voices making it easy to tell who was talking. All in all, a solid book.

"Obsolete" was one of the better dystopian novels I've listened to. It was different and that really sets it apart. I'm excited that since this was book one, hopefully there will be more to come. I like C. T. French as an author and can't wait to see this epic continue.

Taking place after the Blue Pox wipes out almost everyone, the protagonist Madison or Maddie for short joins up with a group of ' Amazon-ish' women who only want a select few males (and females) for breeding purposes where they can start a new world. Some are nice and a few, not so much. They want Maddie to pair with Jonah and neither are interested aside from sticking together and countering a plan of their own.

Maddie learns that people are disappearing under strange circumstances and has released people behind Katherine's back after learning of their demise. Jonah tells Maddie that in fact on the 'outside' she is known for saving people by sneaking them out, however if she gets caught it will mean her own probable disappearance and certain death. Overall, this audiobook was a great listen with a new twist and I would recommend it all day.

About the narrator: CARLA MERCER-MEYER has a wonderfully soft yet powerful voice and made a good story even better. She spoke clearly with perfect characterizations and showed great control. I look forward to more from her in the future and would especially like to see her continue with the series.

l recieved this audiobook in exchange for an honest review. Often in this situation I'm worried if I can find something possitive to say . With this one there was no problem , I loved it !

There are so many other books covering what happens when the world almost ends. This one is rather different, an intersting story, where men are almost obsolete.
The suspence keeps you listing throughout. The " good guy's ( or mainly gals) are very likeable and the baddies suitably evil . Nicely narrated by Carla Mercer Meyer .
I really enjoyed this one .
C.T French is a new author for me , but I will definately be checking out her other audiobooks

If you could sum up Obsolete in three words, what would they be?

What was one of the most memorable moments of Obsolete?

The description in the very beginning of how corpses are dealt with.

What does Carla Mercer-Meyer bring to the story that you wouldn’t experience if you just read the book?

A unique, interesting voice for the main character Madison.

I really liked this.