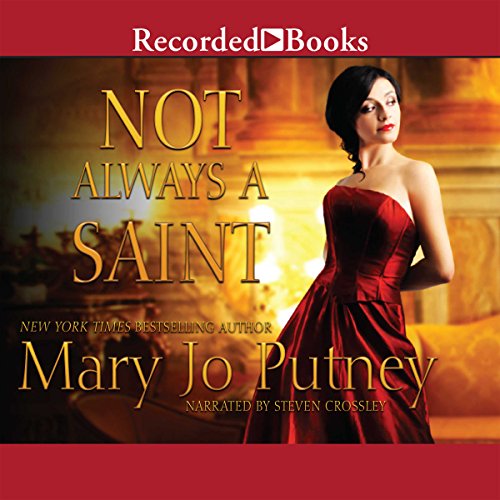 Not Always a Saint

By: Mary Jo Putney
Narrated by: Steven Crossley
Try for £0.00

After the death of his sweetheart when he was at university, Daniel Herbert buried his grief in medical studies and his passion for healing. Viewed as a saint by those who know him, in his own mind, he never quite manages to live up to his own high standards. Most men would be thrilled to learn they've inherited a title and estate from a distant relative, but Daniel is appalled because the burden of wealth will interfere with his medical calling.

Warily, he accepts that he must enter society and seek a wife - a sensible woman who can oversee his properties, leaving him free to continue his work. He does not expect to become intoxicated by a woman called the Black Widow, who is as mysterious as she is shockingly beautiful.

Jessie Kelham's looks have always been a curse. Now alone with a young daughter and a perilous secret, she is in need of protection. But dangerously attractive Daniel Herbert is not the kind of husband she has in mind. If he recognizes her, the demons of her past will surely erupt. Yet they cannot keep apart - and soon they are drawn into a union that may bring joy - or shattering danger.

What listeners say about Not Always a Saint

I'm assuming, that the fact that this book was not filled with chapter after chapter of gratuitous erotic sex and that the hero was not a reformed rack or libertine, made the book boring or bland to a few other readers.The author, a favorite of mine, instead filled the page with great character development and unusual villains. The hero, a Lost Lord was a very honorable man..I liked him. The heroine, a very beautiful woman, was like a Lost Lady. They found each other, love and a marvelous, supportive relationship. The bad guys were unusual too. I liked the way other characterers from the Lost Lord series were used in the tale.

The narrator was definitely on track with a fine performance! I enjoy his voice and characters very much.

A good telling of Daniel's story

Oh I liked this! The audiobook is quite good.

I really enjoy this series. This is Daniel's story and the doctor/vicar gets an inheritance and goes to London to find a bride. At the same time, Jessie - a woman with a past - finds herself a widow with a young daughter with inheritance problems of her own and you know where this is going. But it doesn't take a straight line and the getting-there makes for a good story.

Daniel is a nice guy. I liked him. All the other friends from Miss Westerfield's Academy are back and their lives intertwine with each other. Jessie is a good heroine despite some "issues" with her past.

The narration was done well by Steven Crossley. I already want the next book.

Loved the history and romance in "Not Always a Saint." Jezebel and Daniels story was an inspiring journey from personal desperation to finding the best of self and romantic love! Enjoy!

I generally like J Putney’s writing, but many times there are too many twists and turns that seem predictable and torturous and take away from my enjoyment. This had few and was better forward. S Crossley turned in an excellent performance.

I am sure Steven Crossley is a very lovely person, but he should NOT be narrating books. He is terrible. Story was just ok. Can't say I loved Jessie.

Struggled to finish. Took 26 chapters for something interesting to happen. Don't waste your credit!

We met Daniel in previous episodes, but now we look at the man who is both ordained clergyman and surgeon. He runs clinics for the poor and along with his sister started Zion house, as shelter for women.
He encounters one such battered woman, at his clinic, and then sent her on her way, with an odd feeling that there paths would cross again.
This is a story of that later encounter, and its consequences.
Again, a very different storyline to the normal Regency Romance, with drama and intriguing twists and turns.

It's a tribute to MJ Putney's great talent, that I continued to listen in spite of Mr Crossley's reading. He has a nice reading voice.....but cannot narrate. His voice made all the characters sound whiney & wimpy.
I continued listening because I wanted to see what happened.....and loved the story.

This was actually one of the better books in this series. The reader is alright, would say good but there are sounds like his dentures clicking. It's gets quite irritating, especially during the romantic moments.

Really enjoyable series. Mary Jo Putney is top notch and the narrators were perfect. Each story was intelligent and unique.