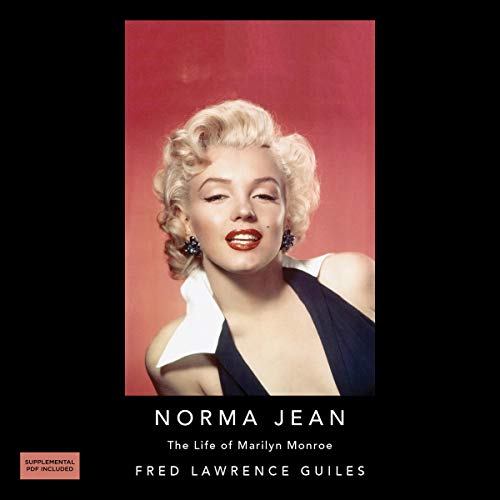 By: Fred Lawrence Guiles
Narrated by: Madeleine Lambert
Try for £0.00

What you may have known about Marilyn Monroe before was only the tip of the iceberg. For 20 years, the men and women who knew Marilyn best saw what they knew suppressed because certain important people were still living and the tenor of the times prohibited frankness. Instead, rumors ballooned. This audiobook finally sets the record straight.

Fred Lawrence Guiles - whom Norman Mailer acknowledges as the chief source of facts about Marilyn Monroe - has written about the life behind the legend. He reveals what really happened in the careening career of the pretty waif named Norma Jean Mortensen, who married the boy next door, became a model, an actress, and a movie star, married an incompatible legend named Joe DiMaggio, sought to improve the mind that came with her near-perfect body, married playwright Arthur Miller, lent herself to the Svengali-like ministrations of Paula and Lee Strasberg, became the mistress of John and then Robert Kennedy when they ran the country, and kept camera crews and studios waiting - but couldn’t keep death waiting, for it took her under the most unusual circumstances at the age of 36.

A legend, by definition, is unaltered by fact, but enthralled listeners will find the revelations in this audiobook - coming to understand at last what happened to the Queen of Need - no deterrent to loving Marilyn Monroe.

Please note: A supplemental PDF that includes artistic depictions of nudity is included with this audiobook.

What listeners say about Norma Jean: The Life of Marilyn Monroe

Is there some *CONSPIRACY* The boring droll untalented "book narrators union" enjoys a virtual monopoly on all of the gigs here or something? Geeze HIRE BETTER NARRATORS.
As for the book, it's insightful, its entertaining enough -but anytime the "Kennedy killed her" conspiracy theory comes up, the author gets an eye roll and loses major credibility points with me. There's far more plausible people who could have done her in if we are to go down that route. The Author also seems to have an inexplicable preoccupation with brown nosing Arthur Miller. An ok book for a free credit.