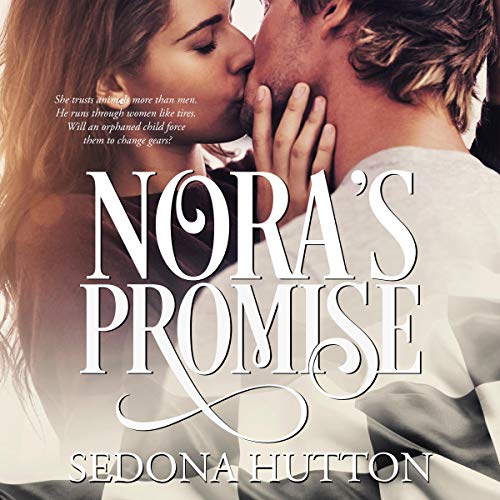 She trusts animals more than men. He runs through women like tires. Will an orphaned child force them to change gears?

With her sister’s death, Nora’s life changed in an instant. Forced to raise her orphaned nephew, the animal rescuer doesn’t expect to be dumped and fired by her kid-hating boyfriend/boss. After her own close call and a message from beyond, Nora introduces the little boy to his handsome, fast-living absentee father.

Davey Johnson is a hotshot NASCAR driver who never wanted to be slowed down by fatherhood. But when he finds out he has a nine-year-old son, he vows to be a better father than his old man. When his first efforts fail in a big way, he enlists Nora’s parenting help. But what starts as a chore transforms into something way hotter than a final lap.

When Davey’s sponsors clash with Nora’s vegan ways, he’s forced to choose between his passion for racing and his love of Nora. Will they be able to blend their lives, or will their romance run right off the track?

What listeners say about Nora's Promise

Such a beautiful story! I loved the slow build up, fully getting to know each character and their history and feeling like part of their present journey.

I really enjoyed the narrator and her ability to change her voice to suit each character. she gave the story life and told it perfectly

The story could be good my issues are. The heroine is a female version of Dr Doolittle in that she can communicate with animals and talks to cows and pigs and rescues them from farmers. She is also visited by her dead grandfather who takes over the body of a delivery man to talk to her. If you don\t mind having vegetarianism and veganism, alternative lifestyles (gurus, mindfulness) being promoted regularly you might like the book. None of these fit seamlessly with the main story and for me ruins the book it is so irritating.

I received this audiobook free for an honest review. I loved this story. Nora and Davey are brought together by outside sources. The mystical touch to this story gives Nora guidance and advice in her decision making. A feel good story that kept me hooked from beginning to end. Looking forward to more books by this author. The narrator did an excellent job with the characters and their personalities, along with bringing this story to life.

Enjoyed listening to this entire book!

I really enjoyed it! This book was full of drama, humor and, romance. The narration was excellent and kept me entertained! The author did an excellent job with the character builds and plot! I read The Perfect Lap (book 2) already because these books can be read as standalones, and loved it! I look forward to reading more books from this author! I was given this free review copy audiobook at my request and have voluntarily left this review.

This was my first story by Hutton and first, listen by England. I was pleasantly surprised by both. Nora's Promise is a Contemporary Romance. This story was like an onion with all it's layers and I loved pulling them back one by one. It had the perfect amount of love and sex. Do you know how hard it is to find characters you actually love? Hutton has them in this novel! All in all I can't wait to read or listen to another by this Author and Narrator.

Author Sedona Hutton is a new author to me although I have listened to narrator Terri England before.

There are some paranormal elements to this story which I didn’t realise until I was into the story.

The narration was good and brought the story to life for me. When Nora suddenly finds herself the guardian of her nephew she is unsure what to do.

However she decides that the time is right to introduce him to his father Davey Johnson, a NASCAR driver who doesn’t know that he has a son.

I enjoyed this story which was heartwarming and entertaining.

I loved this book. This easily captured my interest and I was held captive until the end. This is a first time author for me. She did a great job with these characters and rounding out the story. I laughed and listened in wonder. I love all aspects of this book. The Vegan stuff, the cows, the farm, the mother and step father. All of it was worked in wonderfully to create a interesting and lovely story. The changes these characters made to become a better self was great to watch.
I did listen to this on audio. Terri England was the narrator. She did lovely. Her little boy voice was fun to listen to.

From the very beginning of the story I was caught up in the people, both main characters and supporting cast. They are believable and interesting, with day to day life and big events written so that I wanted to know more as the plot unfolded. I particularly liked Cruse and Davie's mom, as well as the way Nora and Davie grew and opened up as they got to know each other. Overall a very good tale about how a family can come together, both relatives and people who are way more than just friends.

The performance by Terri England was very enjoyable, with well thought out and interesting voices for each of the characters.

My favorite part of the book was warmth and sense of family that built and grew as the story progressed. I did struggle a little bit with Nora's inflexibility with her belief in a vegan lifestyle, but I really looked forward to finding out what came next throughout the story.

you will definitely be sucked into this story.
loves this book!.
I would recommend listening to it.
I received a free review copy of this audiobook, however, my review is unbiased and voluntary.”

Light PNR worth a listen

This is a new to me author and narrator. First the narrator did an excellent job on this book and I will look for more books narrated by her. The story line of the book does seem to meander a bit, in reality I think this could have been two books, but it was a good listen and worth the credit. I look forward to more by this author and narrator.