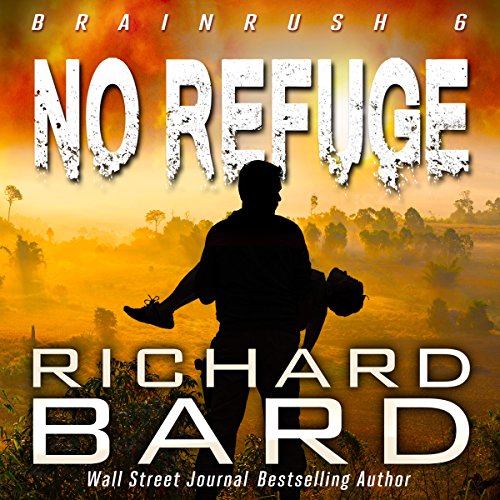 The Wall Street Journal number one best-selling author Richard Bard, who entertained fans with his wildly successful Brainrush thriller series, now unleashes the heart-pounding series finale in a two-book ride that will take your breath away.

Jake Bronson's family and friends are mourning him. They'd watched as he sacrificed himself so their lives could return to normal. But normal wasn't to be. The megalomaniac whom Jake had killed during his suicide assault left a legacy of videos that damn Jake and everyone associated with him, leading to a price being put on their heads, dead or alive. They go to ground, unaware their every move is being tracked by a new breed of young, tech-savvy jihadists about to unleash vengeance on America's homeland - with Jake's family and the unsuspecting citizens of Los Angeles in their crosshairs.

As the jaws of the terrorist trap begin to close, Jake's eight-year-old son, Alex, faces a threat of his own. He carries a burden only his lost father would understand. A journey that begins as he follows in his father's footsteps leads him to a group of terminally ill orphans. One of their siblings has been abducted by child traffickers. Alex can't ignore their cry for help, and the unlikely alliance of youths embarks on a nothing-to-lose rescue mission that has little chance of success - all while unearthly visions demand his attention.

But the bloodthirsty outcry against Alex's family and friends reaches beyond those who wish them harm, as do the visions that reveal their dark secrets to Alex. Help is on the way....

What listeners say about No Refuge

Huge easy fun as we approach the finale. RCBray does the business and Richard Bard tells a deliciously tall tale that appeals to all that love the genre. Thanks

We'll, here I am at the last book in the series.. hating that it has to end but also looking forward to the conclusion. Get the entire series. Guaranteed you will enjoy it.

Worth the wait, and continues the children shall lead them theme started in the prior, and builds upon it... Hurricane pace, freight train plot, and simply superb characters... Read it straight through w/o pause, and starting on the next as soon as I hit submit on this review;). Although goes w/o saying I’ll say it anyway Irrefutably excellent narration...

This one focuses mostly on the young son Alex, his connection to Jake and leaves it open for the upcoming conclusion where the bad guys are planning to get them all. The adults of the group and their story faded out about halfway and the story honed in on Alex and his new friends' mission to &quot;save&quot;. I kept expecting it to segway back to Tony and the elders but it didn't. I could see how the story could have been 'combined' making this the final book, which would make it significantly a longer than the others so a sense of cohesion could have been lost and may be part of why the story evolved as it did. Overall, it played it out well so a solid 4 - my review may be just a little over analytical. :)
...it was an enjoyable experience especially with RC Bray performing. If you like action adventure with some Sci-Fi mixed in you will surely enjoy. I look forward to the last entry and then more, hoping with the same mix of action, adventure and the 'paranormal' from Mr. Bard. I do recommended reading all the books prior, not mandatory, but for this series it definitely will add to the books ability to be appreciated.