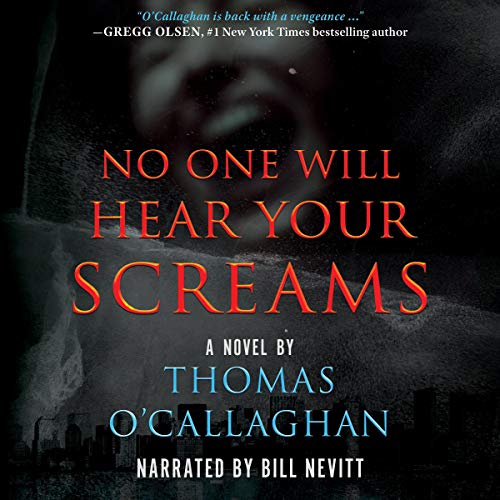 No One Will Hear Your Screams

By: Thomas O'Callaghan
Narrated by: Bill Nevitt
Try for £0.00

"Is that an undertaker’s flower car"? her inner voice asked. Under her steadfast gaze he veered the vehicle toward the parking lot’s exit. The sight of him driving that type of vehicle was unusual enough but why was there a blue poly tarp covering its tail section? More importantly, what was under it? As if Loretta had willed it, the wind shifted, lifting the blue tarp; exposing the vehicle for what it was. A vintage flower car. More frightening though, was its cargo".

Is there a sociopathic killer on the loose and murdering prostitutes in New York City? NYPD’s top cop, Homicide Commander Lieutenant John Driscoll, believes there is. Someone who calls himself “Tilden” and claims to have been sexually abused as a child by his mother’s john. But what could have triggered Tilden’s rage that has him on a mission to eradicate all the women of the night in The Big Apple?

More importantly, will Driscoll put an end to the madness? He soon discovers Tilden’s not the run-of-the-mill sociopath. After all, would a common murderer have taken the time to embalm his victims, which the New York City chief medical examiner determined was the cause of their deaths?

Driscoll, a man haunted by the events of an unstable childhood himself, must put aside any sympathy he may have for Tilden and put a stop to his murderous rampage. Teamed up with Sergeant Margaret Aligante and Detective Cedric Thomlinson, who have their own issues, the commander sets out to stop the killings and bring Tilden to justice before he kills again.

What listeners say about No One Will Hear Your Screams

No One Will Hear Your Screams (John Driscoll Mystery) (Audible Audio), my first read/listen from author Thomas O'Callaghan but it will not be the last. An excellently written crime thriller! I've already been to Amazon looking at his titles. Bill Nevitt’s narration is, as always, excellent & adds greatly to the book’s enjoyment & seems the perfect complement to O'Callaghan’s work. (RIP Marley January 20, 2014 - July 24, 2018).

This is not for the faint hearted!

This was a great book for those who enjoy this genre. The killer in this book had a sad childhood and had some heinous things done to him. The author did a great job and really made this killer gruesome. This is a book that will keep you intrigued until the very end. I wasn’t really expecting much but I was pleasantly surprised with how much I enjoyed this book! Well done. I will be checking out more of his titles as I’ve never heard of him. I did volunteer my review for a free ARC of the audio version. Great job to the narrator as well!

This book was intense from the first sentence. It was a fantastic thriller that kept me on the edge of my seat the entire time. It is a sign of good writing that I was very uneasy at certain parts and had to take a break or two during the book.

You Should Have Been in Condition Yellow

I was given this free review copy audio-book at my request and have voluntarily left this review. This review is for the audio copy of No One Will Hear Your Screams by Thomas O'Callaghan and narrated by Bill Nevitt. This was outside my normal genre but it is read by Bill Nevitt so I gave it a chance. I was not disappointed. It was a very good, albeit disturbing, novel. It kept me engaged throughout the story. I liked all the good people and really hated the bad ones. It was entertaining because the story was good and made better by the narrator.

The author has created quite an interesting story line for this horror novel. This book is definitely creepy due to the character, the psychotic villain who carries out strange embalming rituals. I especially liked the police detective's tracking down this killer.
I was impressed with the narration and how the voices of the different characters were easy to recognize each person Voice varied even though it was only one narrator doing the job.
A well done audiobook.

Totally gripping and tense thriller.
A police thriller that is dark and horrific in places but is a Superb read.
narration is excellent and holds you.
I received a free copy of this audio book at my own request and voluntarily leave this honest review..

An entertaining, disturbing book of horrors

No One Will Hear Your Screams is an entertaining but truly disturbing book full of awful things that will haunt the reader’s/ listener’s dreams and keep them up at night. This book ups the ante gruesome imagery, and the horror is not limited to the villain as it seems all of the characters have their own nightmares to share.

Contains graphic and disturbing violence as well as perverted sexual scenes and rape.

The narrator of the book does a good job bringing the story to life.

I received a complimentary copy of this audiobook, and this is my honest and voluntary review.

Had me checking my locks

I was enthralled from the very beginning. An abused little boy grows up to be a serial killer. It’s pretty graphic to the point I couldn’t listen to it after dark when I was alone and I double checked all my locks. The narration was amazing there’s good police work

No One Will Hear Your Screams

If you enjoy watching "Criminal Minds", you will probably enjoy this book. A sociopathic killer is on the loose in NYC, killing prostitutes in sadistic ways. Lieutenant John Driscoll and his team are in a race against time to try to find him before he can kill again.

The killer seems to be on a rampage against his dead mother and Catholic Nuns for the wrongs that were committed against him as a child. Each murder just seems to feed the demons inside him.

First of all, if you are squeamish, steer clear of this book. There are very graphic and disturbing descriptions of the murders that will definitely give some readers nightmares.

The book was well-written and I especially enjoyed the dialogue between the three cops investigating. It's always refreshing to have some humor in a book like this. The character of Driscoll was engaging and I would enjoy reading more books with him as the MC.

However, some of the scenes in the book really didn't seem to fit into the overall story. I guess the author was trying to flesh out the characters, but some of these parts didn't do anything to make the story better. There were several characters that really didn't add to the story (in my opinion).

Also, I felt like the ending was a little rushed. After a long buildup, it was all over. I still have unanswered questions about the "motive" for the murder spree. I feel like it could have been so much better with more information.

The narrator did his usual wonderful job and his performance really added a lot to my listening enjoyment. Mr. Nevitt is one of the few male narrators that seems to be able to pull off female voices in a convincing manner.

I was given the chance to listen to this audiobook by the author/narrator/publisher and chose to review it.

Tilden is a sociopathic serial killer of mostly prostitutes as well as other women who was abused as well as a child and with the church. Love the characters of Lieutenant Driscoll and Sergeant Margaret who do the investigation. There are some horrific disturbing scenes, violence and sexual situations taking place in towns of upstate NY. Recommend if you enjoy suspenseful thrillers with good narration. I was given this free review copy audiobook and have voluntarily left this review. Thank you