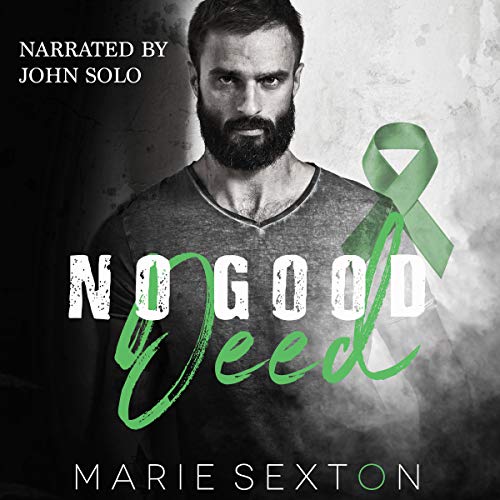 Charlie Garcia has spent his life helping others. For years, he’s provided free health care for his neighbors and served as a counselor for his friends and their partners. He loves being the go-to guy, except when it results in him falling for the wrong man.

Now, six years later, the one who got away is back in Denver to donate a kidney, and he has a request - he wants Charlie to marry him long enough to serve as medical power of attorney. Charlie’s happy to help, but in addition to a surprise fiancé, he suddenly has two huge problems: a neighbor with a grudge who wants to ruin his career and a secret that may destroy his friendship with Warren, Phil, and Gray.

What listeners say about No Good Deed

I don't know what inspires John Solo but he does not take clues from the author's text. He makes a lot of sentences whiny. He loves reading with tears in his voice but never the text states that's how the character talks or feels. He did the same with Tal Bauers's novel Murder Between Us. I could not finish that either.

I finally got Charlie's story

I was really looking forward to Charlie's story... I had a real soft spot for him all throughout the series. I'm so relieved I wasn't disappointed. I did get a tad bit frustrated and wanted to bang some heads together, but thats a good thing.

I was so invested. I didn't want it to end, at all, but I wanted them to get their acts together. Marie is, and will always be, an automatic buy for me. she has a way of writing that makes you love her characters, she'll punish you for it and you'll thank her right after and beg for more.

I'm glad John pulled back quite a bit for Charlie, I don't think it would have worked as he'd started out in One Man's Trash. his performance is fantastic in this as with the rest in the series. Marie and John as a team up just works. John has a connection with the material that just shows in the end result.

Do I love it? Yes.
Do I recommend it? yes and no. you have to read the whole series to get an understanding of the characters in this one. and Marie is NOT one to mince words, they're a hard read, not for the delicate flowers.
Is it worth the angst and pain? Hell yes!

A brilliant end to a wonderful series!

This is book 4 in the Heretic Doms series and can be listened to as a standalone.

This book was gritty, emotional and so real!
The characters were relatable and well fleshed out and I couldn't help but feel for them.
The author does an amazing job of making the setting of the story as realistic as possible.

I am bittersweet seeing this amazing series coming to an end.

I felt for Charlie and was so happy to see him get true love and what he deserves.

John Solo's audio delivery in this entire series has been truly exceptional. He did a great job in bringing some if my favorite characters to life.

Enjoyable Ending to an Emotional Series

I’m so sad it’s over now. I’ll miss these Heretic Doms.
I have loved Charlie since the first book and while I wasn’t expecting a story like this it was pretty perfect for him.

This whole series is a gut wrenching roller coaster ride, but I enjoy it every time. I have read and reread this series over and over. As long as you aren’t squeamish over a long rough road to some kinky love then this book and this series will not disappoint.

Also if you didn’t know John Solo is phenomenal and perfect to voice these characters. Charlie’s voice has changed since the beginning, but John Solo explained Charlie’s transformation in his Facebook group and it makes sense. I liked both so I’m happy either way.

In the previous three Heretic Doms book, Charlie was the backbone of the group. He was there to quietly support Phil, Gray, and Warren as they navigated the treacherous waters of becoming Dominants to very different submissives. Taylor, Avery, and River were all unique and each man suited the Dom he was partnered with, but those were not easy matches. Charlie was often there to ensure the matches were made, the men had sense talked into them, and things moved forward. Even in this fourth book, there are hiccups. Avery can be resentful of the newcomer, Taylor’s propensity of self-harm isn’t completely eliminated, and River is attempting to hold things together for the three of them.

This book centers around Jonas. Six years ago he’d been in a toxic relationship with Gray. The men were ill-suited and after three years, it was painfully obvious things weren’t working. Jonas was not into pain but submitted to make Gray happy. Gray was in love with his best friend and fellow Dominant Phil, but he tried to keep that attraction secret. It could never go anywhere because, one: two Dominants and two: Phil didn’t reciprocate Gray’s feelings. In fact, he was completely oblivious to them. So Jonas turned to the rock of the group for help and Charlie was there. Then Jonas disappeared for six long years.

His return sends the group into a tailspin. Charlie is happy to see Jonas and surprised at the request Jonas makes. Gray, meanwhile, is angry. And Gray angry is a sight to behold. Avery is jealous, and their emotions upset the boat the three couples are sailing on.

Jonas’ return is for altruistic reasons, his request of Charlie could be viewed as selfish. But Charlie is known for his own charity work. He’s a nurse who tends to patients in his home. Patients who can’t afford to seek help, or who would be in trouble if they do. More proof the American healthcare system is quite broken. But when that is all put in jeopardy, Charlie has some tough choices to make. Also, there is on the page violence. Appropriate to be sure, but there nonetheless.

This is not an easy book. I have fallen in love with the other men and to witness the disruption was disturbing. I wanted it all to work out. Now, this is a Marie Sexton romance so, of course, everything did. What I also loved about this audio is the bonus content. Certain scenes shown from other characters’ points of view. And a happy ending for a charming character I had come to care about.

Finally I need to mention John Solo. Talk about perfect. He hit just the right note for each character, bringing them to life. He did a great job and I’m so glad he did this series.

So, yeah, I loved the book. It was the perfect ending to a phenomenal series. One I plan to listen to again.