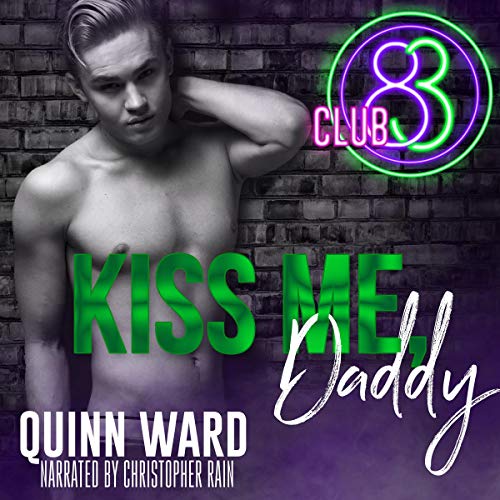 By: Quinn Ward
Narrated by: Christopher Rain
Try for £0.00

Andy's a recent college graduate with a mountain of debt and a load of regret over earning a degree he'll never use. When he takes a job at a local gay bar, he doesn't expect the first person to catch his eye to be the man he's been dreaming about since a chance encounter.

Joshua's comfortable in his life. He has an amazing son who's wise beyond his years, an ex-wife who's one of his best friends, and a great job. Now, if only those closest to him would quit hounding him to start dating again after the divorce.

Joshua finds what's been missing with the other people he's tried dating, the first time Andy slips up and calls him "daddy". What starts as a slip of the tongue could lead to what both men really need and want.

What listeners say about Kiss Me, Daddy

Christopher Rain brings Andy and Joshua 's characters to life. Enjoyed reading this story. And the narration was brilliant.

Andy is about to start work at Club 83, on his first night he sees the guy he has been fantasizing with. He has jerked off to him so many times but he thinks he is married. Joshua is divorced and likes Andy so leaves his number but a misunderstanding is in the way. Once the let the truth known, they fall for one another beautifully written and narrated

This is a new narrator and author to me. I wasn't disappointed and actually had a hard time not listening to this audiobook without stopping. I'm excited to jump into the rest of the series.

When you usually listen to Michaels D, F & L, Joel L and John S, Christopher's delivery feels strange. But after chapter 3 he became another go to narrator. The Novel is usual for its type, no shocks or suprises.

Age gap romances are not usually my thing but this one kept me hooked from the beginning. I really enjoyed it and am happy I found a new author and narrator to enjoy.

The performance from the narrator is also very important for me. I can't listen to a lot, because my English as a non-native-speaker isn't so perfect to follow a whole story over hours, when the narrator speaks too fast or too sloppy. Normally I have to SEE the person, who is talking to me in English. Christopher Rain is one of the 8 narrators (so far), I can listen without break and have no problems to follow. I'm just not yet finish with the book, just over the half, but I listen enough to give a review.

Loved this book looking forward to listening to the next ones in the series, great narrator.

Decent Book but a few issues

The story was mostly a instalove book which I don't mind. It was fairly cute although I felt the ending needed a bit more work to show how the ending with his parents got to be that ending.

My biggest issue is the narrator. He consistently mispronounced words, again and again and again. It became very frustrating to listen to. This would of course been neggated if it was the text version. My other huge issue is is the stilted way the narrator pronounced Little One, is was said like LIT. TLE. One, and done in this weird voice as well. Since this was repeated again and again as a pet name, almost to a ridiculous amount, the weird pronunciation made me groan with every single time it was spoken. Nevermind that is my pet name for my own boy so to hear it mutilated made it that much worse. Such a sweet nickname to be murdered. He also had a almost child like high pitched tone for boy in the Daddy/boy relationship, and he is a grown ass man. Just because he is a "boy: does not mean he is 5, he isn't even a little, he is just the boy in this D/s relationship. Hell the 10 yr old kid sounded more adult than the adult did, and he actually was a kid.

The story was sweet and it was nice to see the couple get what they had always wanted and it was nice to see a divorced couple that had a good relationship, although it seemed odd the mother was gone 90% of the time, and yet I don't recall beyond the author saying she was gone for work and for speaking engagements and that it was her dream actually state what her job was. But I did like her reception towards the new couple.

I don't think it is worth the credit or the 7:50 to buy it, but to read it, absolutely worth it. But not the audio version.

I love a good Daddy/Boy story. The MCs were like likeble even when they were frustrating. Christopher Rain is a new narrator for me and I loved his voice. He was able to give each of the characters distinguishable voices.

I thought this would be delicious, it wasnt.

the characters were stilted and the kink wasn't all that. the audio was kinda lousy. I didn't like it and am sorry I purchased it. I didn't even finish the whole thing. don't waste your time with this one.

Age gap romances are not usually my thing but this one kept me hooked from the beginning. I really enjoyed it and am happy I found a new author and narrator to enjoy.

Becoming and adult isn’t all it’s cracked up to be!

Amazing story about finding oneself.
Great characters and plots. The characters are relatable to everyone who has been at the beginning of adulthood.
An unconventional divorce is at the heart, making a divorced reader wish theirs had been so amicable.
Can’t wait for more in this series!

Kiss Me, Daddy is book 1 in the Club 83 series. This is a sweet age gap, Daddy/kink story about Andy and Joshua. Joshua, a divorced dad with an unconventional relationship with his ex-wife, meets Andy, a soon to be college graduate and in need of a daddy. I love their dynamic and how easily they fell into a relationship together.
I recommend this beautifully written sweet story.
Narrator Christopher Rain does an amazing job in bringing these characters to life. I didn't want the story to end.

I loved the the confidence that built as the relationship between the MCs grew. Can't wait for the next one.

I love this story and the narration was spot on! Reading the book was amazing but this was a great experience.

Andy's dad was a venomous bigot who neede put in his place eons ago! How his family put up with him is beyond me. Glad when Andy stood up to him. I was glad Amy called out Will on his biases. I would have thought she would have sussed him out better before this. Smh! I think Josh let Amy rule too much of a home she wss transient in. Wth? Crazy set up with blended family, but it worked for them. The narrator did a good job. I voluntarily listened to a free copy of this and am giving an honest review.

This book falls right into my favourite romance genre of MM relationships, and I'm a fan of a good age gap trope. It did not disappoint in that regard.

There is an oddly arranged living situation that is revealed pretty early on. Normally I don't care to read about kids, but this one I enjoyed.

I was gifted this audiobook for an honest review by the narrator. There was good voice distinction between characters, the pacing was good as well. I got hung up on some word pronunciation and some flow, but don't let that hold too much weight as I am a very picky listener and trigger easily.

Overall a nice story to read that continues with more books in the series. Thank you author and narrator for the opportunity. This is actually a 3 5 for me but I couldn't reflect that in the star rating.