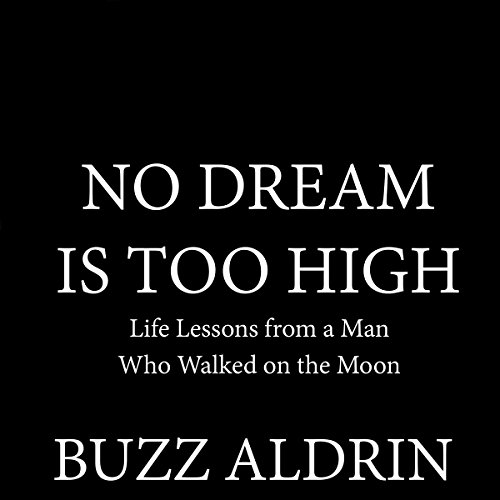 No Dream Is Too High

By: Buzz Aldrin
Narrated by: Traber Burns
Try for £0.00

Everywhere he goes, crowds gather to meet Buzz Aldrin. He's a world-class hero, a larger-than-life figurehead, and the best known of a generation of astronauts whose achievements surged in just a few years from first man in space to first men on the moon. Now he pauses to reflect on and share what he has learned, from the vantage point not only of outer space but also of time: Still a nonstop traveler and impassioned advocate for space exploration, Aldrin will be 86 in 2016.

No Dream Is Too High whittles down Buzz Aldrin's event-filled life into a short list of the principles he values, each illustrated by fascinating anecdotes and memories, such as:

Second comes right after first. NASA protocol should have placed Buzz Aldrin on the moon first, but rules changed just before the mission. Buzz discusses how he learned to be proud of being the second man on the moon.

Look for opportunities, not obstacles. Buzz was rejected the first time he applied to be an astronaut. Failure is an opportunity to learn to do better.

Always maintain your spirit of adventure. For his 80th birthday, Buzz went diving in the Galapagos and hitched a ride on a whale shark. He stays fit, energetic, and fascinated with life.

No Dream Is Too High is a beautiful memento, a thought-provoking set of ideas, and a new opportunity for Buzz Aldrin to connect with the masses of people who recognize his unique place in human history.

What listeners say about No Dream Is Too High

Entertaining and easy to listen

Light content that didn't take any effort to listen to. No major life changing revelations to be expected though.

This was ok. The narration was great, felt like Buzz was actually reading it. The content - a bit hit and miss. There were some interesting bits in there and some Apollo information I wasn’t previously aware of, but the book is mainly Buzz trying convince you he’s not really an ego maniac- whilst simultaneously being an egomaniac! The “do you know who I am”/McDonalds story made me want to cringe. It was a bit like a David Brent autobiography.

Buzz is a hero of mine and so I won’t hold this against him but I won’t be listening to this one again.

Amazing man with some very wise words that everyone can benefit from. Entertaining, thoughtful and positive outlook on life with some heart felt inspiring insights in to someone who has fully embraced what life has to offer and still does. To echo the words of Buzz - get your ass to Mars. Great read - you’ll be inspired after reading / listening to this.

To the moon and back

Great life story from Buzz, recommended listening about conducting your life when you really have reached the top

Alot appeals to me about this book, if your a big thinker with an open mind, want a better future for humanity then listen to Buzz a man that looked back at the whole globe, not many authors can give you that point of way.

This is probably the best book listened to so far in 2016 (have listened to at least 15 to 20). If this is an accurate account from Buzz then sounds like a great person.

Starting chapter is a concise summary of an extraordinary life which included stints as fighter pilot and one of only 12 moon walkers. This background then informs the rather short (5.75 hour total) narrative which provides Aldrin's take on how to live life - reinforced by examples and stories from his past and current work. While the lessons sometimes seem basic ("show me your friends and I will show you your future”) most of life is about getting the basics right after all. Also as an older adult, I appreciated his focus on the importance of keeping and fostering a spirit of adventure and innovation all through life
The narrator did a good job trying to capture the authors voice from the book in his performance – though have to admit I did end up listening to it at 1.5X speed and one gets a better sense of the energy/enthusiasm the author has vs. the sometimes paced feel of reading.

Very welcome read and credit worthy.
Sometimes good to be reminded that the basic lessons are those best remembered.
Plenty of good stories to make it a good read for biography and space enthusiasts as well.

This book is written very accessibly and is full of fun stories and inspirational reminders. The feel is as though you are are visiting with Buzz himself. Thanks.

Cannot put this down!

Dr Aldrin 's point of view on life is both inspirational and thought provoking! Fun read!

A great book by an accomplished man. It is inspiring, which is the point. Great performance.

Some good stuff here, but it's evident that Dr. Aldrin has a colossal inferiority complex. The airport story about the acrobat and his fans was somewhat disturbing, along with the "Do you know who I am? Get me free coffee!" story. I recommend Mike Collins' book, "Carrying the Fire", which is more entertaining and level-headed.

Buzz Aldrin shares his life lessons and personal experiences in a way that gives me the motivation to do more with my life. At 45 years old and retired from the military, this book has made me realize that my journey in life, my profession and contributions to my country and community has only began.

A book that made a huge impact in my life! I was so moved when the life lessons were summarized.

Not worth one credit

Entertaining, but repetitive and short. Lots of platitudes. No groundbreaking material here. Saves the credit.

It was a good book but with he would have shared more about his mental illness and alcoholism.

If you want to get to know Buzz a little bit better, and learn about the things he values, this is a good listen.