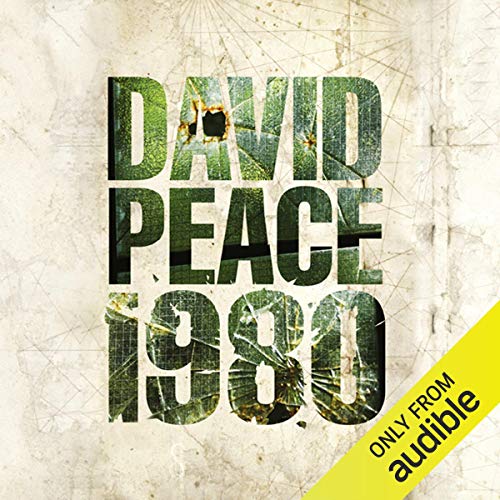 By: David Peace
Narrated by: Saul Reichlin
Try for £0.00

Nineteen Eighty is set against an evolving backdrop of power, corruption, and lies.

The nightmare continues during the winter of 1980 when the Ripper murders his 13th victim and the whole of Yorkshire is terrorised. Assistant Chief Constable Hunter struggles to solve the hellish crimes and bring an end to the horror, but is drawn ever deeper into a world of bent coppers and sleaze. After his house is burned down, his wife is threatened and his colleagues turn against him, Hunter’s quest becomes personal, as he has nothing left to lose.

Nineteen Eighty is a compelling battle between two desperate men, each determined to destroy the other. This third volume of the Red Riding Quartet displays Peace’s unique voice, which places him as one of the UK’s finest crime writers.

David Peace (born 1967) is an English author. He was named one of the Best of Young British Novelists by Granta in 2003 and won the 2004 James Tait Black Memorial Prize for Fiction. He is also known for his novels GB84 and The Damned United; the latter was made into a feature film starring Michael Sheen.

"Quite simply, this is the future of British crime fiction." ( Time Out)
"The pace is relentless, the style staccato-plus and the morality bleak and forlorn... Peace's voice is powerful and unique." ( Guardian)

What listeners say about Nineteen Eighty

3rd installment let down by production

3rd part of this dark story. chapters finished with a word or two missing and towards end a chapter started mid sentence. Found it irritating.

There was a lot of repeated phrases in this one which I think was supposed to build up the tension but I just wanted the story to move on and get on with it.

Great novel. Narration by Saul Reichlin (The Girl With The Dragon Tattoo) is genius. What spoils it (and this is picked up by all other reviews) is the constant and relentless repetition of key phrases throughout. At times its a very difficult listen; but bare with it (if you can) and reach the end - it's worthwhile

I listened to this book and heard the last chapter with a sense of relief. The basic story is compelling and mainly a good listen - it is totally ruined by the constant repetition of what the author obviously thought were 'key phrases'. Not just once but over and over again. I have never written a review with any negative comments but this one deserves all!

i am very sorry but i have to say this.why dose the author have to keep repeating himself.it drove me mad hearing the same descriptions repeated over and over again.this book is hard work but i will finish and read the final book.

Atmospheric, at times hard to handle.

It is beautifully written and expertly narrated, and still I felt a few times like it was just too bleak to keep going with. I am glad I did, and I do plan on listening to the fourth book (when it comes out!), but it is still something that I have a hard time recommending...It is perhaps not what everyone expects it to be...it is really more of a glimpse of a time and place than it is a thriller or mystery.

I definitely felt like I was right there in the middle of it all, even when I didn't really want to. The author is masterful in creating a feeling for Yorkshire and the moral and physical decay of that world in 1980. It can be pretty painful to listen to, but it is enthralling none the less. Definitely not for the squeamish.

This part of the series has the most sympathetic charcter in Peter Hunter; a good but flawed man trying to do the right thing in a wrong world. The ending of this book shocked me the most out of all four. Again, Saul Reichlin is brilliant.