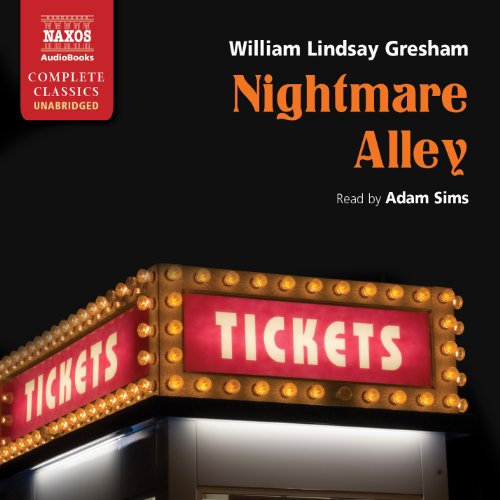 By: William Lindsay Gresham
Narrated by: Adam Sims
Try for £0.00

Gresham's little-remembered noir masterpiece deserves a whole new generation of readers, and Adam Sims's dark performance is a marvelous way to reach them. The story begins in a carnival, which provides a narrator's dream assortment of characters. Though some are unmistakably comic, Gresham's vision is anything but lighthearted. His protagonist, Stanley Carlisle, is a mind reader cum spiritualist who preys on the lonely and despairing without recognizing the blackness at his own center. Sims is alive to the tragedy of Carlisle but never seeks to soften him. He coldly follows Carlisle on his unmerciful path - right to the devastating but inevitable end.

Nightmare Alley is American author William Lindsay Gresham’s first and best-known work. The novel - most admired by noir fiction fans - was published in 1946, adapted into a film in 1947 starring Tyrone Power and subsequently printed as a graphic novel by Spain Rodriquez. During the 1940s Gresham worked as an editor for a genuine crime pulp magazine in New York, during which period he wrote this book; characters range from hustlers to Machiavellian femme fatales in a dark world of show business. Stan Carlisle is an ambitious ‘carny’ who eventually becomes a spiritualist for the rich and gullible. It appears that the world is at his feet, but not everything is as it seems….

What listeners say about Nightmare Alley

Where does Nightmare Alley rank among all the audiobooks you’ve listened to so far?

One of greatest psychological thrillers, both of its time and ours.

Excellent characterization of each voice. Realistic not cartoonish. A perfect match of voice and text.

This is a book for adults that implies much without being graphic. It is a dark, dark, look into human nature-- a cynical, and keenly observed depiction of greed, ambition, deception, and ultimately self-destruction. Plus, Gresham provides a personally researched glimpse inside the now almost-gone world of the carnival midway, not to mention the old tricks psychics still use to this day, to exploit the gullible and desperate.

Where does Nightmare Alley rank among all the audiobooks you’ve listened to so far?

There's a moment where Stanton loses it for a bit and starts laughing. I've listened to that part in this over and over. It was a caliber of performance that I've never even seen in stage plays. I was in awe of the entire thing.

Performance was awesome but story was all over the place. The premises was good but it lacked alot.

I could not stop listening

Big big fan of the Tyrone Power Joan Blondell movie just stumbled across the book. I absolutely loved it and the narration was some of the best I've heard.

Great escapist entertainment, so long as you can handle the dark side. It deserves classic status,

Would you try another book from William Lindsay Gresham and/or Adam Sims?

Both the reader and the story were a nightmare. Why did I expect different? I'm ridiculously optimistic.