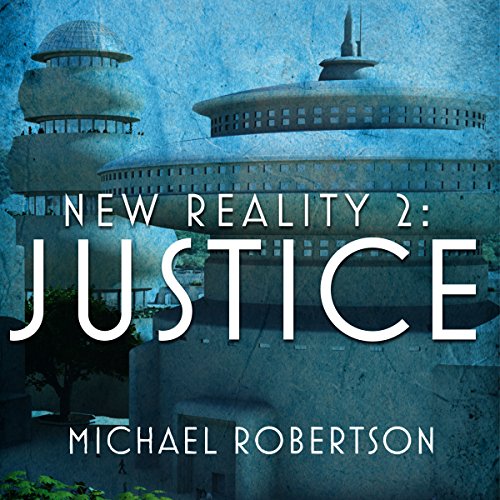 Nirvana. A city of opportunity and excess; where a person's rights and freedoms are staunchly protected...unless you're from the Estate. Those from the Estate live in abject poverty and are victimized by all of those around them for entertainment.

In Nirvana, having a child out of wedlock is a one way ticket to the Estate. Marie has hidden her pregnancy from those around her where she works for the corporation contracted by justice department to watch criminals logged into new reality. But something isn't right about the way the Rixon Corporation is being run.

If Marie can uncover the corruption before the justice department does, keeping her mouth shut could be worth the cost of a marriage certificate. But if she gets it wrong, not only will she end up having to raise a child on the Estate, but she'll face the wrath of one of the most powerful corporations in all of Nirvana.

New Reality is a science-fiction dystopian novel where the female protagonist does all she can to survive.

Hmmm, not sure - most of my friends like sci-fi/epic - inspiring (Star Wars) type of stories. I like a good post apocalyptic/dystopia story, but this one had lots and lots of dark moments - which some folks can't handle.

Everything was always a heavy trial for the characters, Marie and Frank - but the story is a very well laid out plot with well developed characters, and definitely holds your interest in such a way, it makes you want to find out in the next story what happens to everyone - will the corrupt folks of the city of Nirvana get whats coming to them? Will there be a silver lining in the end for the poor citizens living at the Estate?

What was one of the most memorable moments of New Reality 2: Justice?

There are a lot of great moments - the 2 Estate folks holding commuters hostage; the bus scene between Marie and some young hoodlums; the bowling alley scene. I don't want to reveal too much - the story has a lot of rich detail.

The discovery by Marie of what actually was happening to the criminals of New Reality at Rixon. And the comic relief of the coffee maker named Jules and his snooty self ('would you like a coffee?') - it was nice to have some humor thrown in to what was otherwise a dark, depressing tale.

Her tone fit the story well - character voices were appropriate for each person's personality or machine, whether male or female. I liked her snobbish voice for Jules, especially :-) Marie's voice showed the fatique and frustration of her situation very well.

No, it's very detailed and hard to follow if you are tired. It's better to absorb in short bursts.

Looking forward to book 3 and finding out what the final outcome is for the citizens of Nirvana :-)

Warning:  There is some offensive language and degradation of humans, especially women.

To live in Nirvana, a state of perfect happiness where everyone’s wants and desires are protected fiercely by the government is an idyllic place.  Well, unless you happen to live on the wrong side of Nirvana or rather on The Estate.  Then one’s life is a purgatory of wretchedness and suffering.

As an estate rat, one cannot speak to members of Nirvana, they may not accept tips nor are they allowed to believe they even matter.  Escape from The Estate is nearly impossible as well – it’s in the water!

Marie works at New Reality – a prison for those undesirables; a unique approach for managing the interment of criminals.  Marie has to discover what’s amiss at the prison so she can save herself, Frankie and their unborn child.  Frankie was once an estate rat and fights daily to gather the credits to wed Marie and keep themselves out of The Estate – if you have a child out of wedlock or intimately cohabitate there are prices to pay.

Marie, a once weak woman surprises all by being much stronger and more aware than one first believes.  Single handed she begins to question and undermine the structure of Nirvana’s society by taking up for the less fortunate, but when she finds herself a “less fortunate” she is alone.

Marie has some revenge to extract, will she be successful?  Can she save the day?  Only time will tell and time is running out!

Michael Robertson does an excellent job of presenting a utopia versus dystopia life, powerful and revealing told from a woman’s point of view.  Excellent book, I hope there is a part three – there were somethings I would like to see closure on.  I enjoyed the story, it was interesting and action packed.  It moved slowly at first but gained momentum.  In a sci-fi community of gadgets that talk (Jeeves the coffee maker was a joy with his sassy comments), cameras everywhere and an annoying newsman whom the government dictate that when he speaks you drop everything and listen/watch.  There is no room for disobedience or individual thought.

Well-written Robertson is detailed in his plot and develops the character in a thorough fashion - I could almost feel the slime of Dougie!  Ugh!

The narrator, Christine Padovan did a good job narrating and made distinct voices and tones.  The only drawback I had with her was the consistent dragging out of the last word of each sentence.  At first it was distracting but then I became so caught up in the story that I quit noticing it.  Given the content, the narrator needed to speak slowly and clearly.  I know I personally have issues with people drawing out words to make them last longer – so I am sure it is me; I prefer crisp narration.  However, it was not so bothersome that I would not listen to her again.

There were no issues with production.  The sound quality was good.