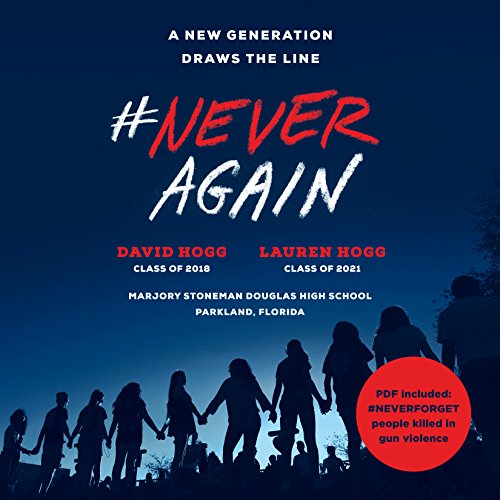 From two survivors of the Parkland, Florida, shooting comes a declaration for our times and an in-depth look at the making of the #NeverAgain movement.

On February 14, 2018, 17-year-old David Hogg and his 14-year-old sister, Lauren, went to school at Marjory Stoneman Douglas High School, like any normal Wednesday. That day, of course, the world changed. By the next morning, with 17 classmates and faculty dead, they had joined the leadership of a movement to save their own lives and the lives of all other young people in America. It's a leadership position they did not seek and did not want - but events gave them no choice.

The morning after the massacre, David Hogg told CNN, "We're children. You guys are the adults. You need to take some action and play a role. Work together. Get over your politics and get something done."

This book is a manifesto for the movement begun that day, one that has already changed America - with voices of a new generation that are speaking truth to power and are determined to succeed where their elders have failed. With moral force and clarity, a new generation has made it clear that problems previously deemed unsolvable due to powerful lobbies and political cowardice will be theirs to solve. Born just after Columbine and raised amid seemingly endless war and routine active shooter drills, this generation now says, Enough. This book is their statement of purpose and the story of their lives. It is the essential guide to the #NeverAgain movement.

Includes a PDF of #NEVERFORGET, people killed in gun violence.

What listeners say about #NeverAgain

This book puts the story of the Parkland tragedy and the #NeverAgain movement in a human perspective of the people who lived through the tragedy, how they dealt with it, and where they came from. It is a moving, interesting, and still extremely relevant listen. What the Parkland students have managed to accomplish in the wake of the terrible tragedy they went through is truly remarkable. The wake-up call and continuous push of the #NeverAgain movement is absolutely necessary in order to create a future for American children/people.

Fellow Readers: As a parent, listening to David and Lauren Hogg read this story, it brought to life the fears fellow parents and students deal with each and every school day. David and Lauren did a great job writing and reading this story. While it's a quick listen, it's very well done. To the authors and the students of MSDHS ... please continue to fight the good fight. The politicians and NRA hope you get tired. I hope you never do. You have my support!

An eloquently insightful and intelligent book

Honestly, what more can I say about this book other than it is an eloquently insightful and intelligent read that discussed the background of the March for Our Lives movement as well as the organization’s hopes for the future. As someone who doesn't usually go for political books, I found it interesting to hear David and Lauren's feeling and experiences as a result of the Stoneman Douglas attack on February 14th, 2018. I would be lying if I said that I didn't shed at least a few tears while listening to the book. Furthermore, I applaud David and Lauren’s excellent job at narrating this book; you can hear how determined they are to create change. Overall, I would highly recommend #NeverAgain to anyone who enjoys following politics or reading non-fiction accounts; you won’t regret it.

Both narrators spoke very well. Their pitch was consistant and easy to listen to. Some narrators get softer and let words fall away then all of a sudden say a few words loudly. This can make listening difficult. I enjoyed hearing about their lives and would try to forget the horror that this story was ultimately leading up to. However, that was the point of the book, to keep us from forgetting. And due to these powerfully strong, stable, loving, heroic students. This tragedy will be remembered and used to make our country safe. Thank you.

You guys did a really great job writing this. Kudos to both of you! Keep it up.

I always knew that it was impossible to imagine how students that have survived a school shooting must feel and what they carry with them forever. Hearing about it from students that experienced it made me realize how true that is. David also describes his personal growth journey which is amazing for a person his age. And last they describe exactly what the are working for so passionately. This is one more reason I have such respect and admiration for these brave and remarkable students from Parkland.

takes you through the Parkland shooting

This well written account makes you feel like you were there for the Parkland shooting, Valentine's Day this year. The story is told from two points of view - brother and sister David and Lauren Hogg. Lauren explains how she felt realizing she lost several close friends. David explains how she cried hysterically for three days and he was at a loss to do anything to help her. David's experience was completely different. For most of the event he was under the impression it was a drill. When things started to turn, he had the foresight to take out his phone and start recording. The siblings' accounts give us a glimpse into the minds of today's Millennial generation. The last few chapters are David Hogg's narration of the aftermath, including how he interacted with the media, the NRA, and other forces of the culture war. He also outlines his plan and determination to make this a better world for his generation. We can all help by learning more about our younger generation and their experience of today's America. The majority of Americans want to do something about the gun problem; only a small percentage of Americans have high-powered guns and arsenals of guns in their basements. Yet they are winning. I recommend the Audible version. The authors did an excellent job reading their book aloud, and it has more impact hearing their strong voices.

They gave me hope!

To David, Lauren thank you for writing this honest and brave book, and to every young person involved in this movement, to parents, teachers or anyone involved in March for Our Lives, thank you for the inspiration and continue the fight, I promise I'll do my part.

It was great to hear about David and Lauren’s background and how the MFOL team and cause came about. Keep it up awesome kids! We here in Parkland are behind you 100%.

Excellent. A must read.

David and Laura Hogg are smart and prepared to lead, already leading, in a movement, a club, they never should have had to join. Listen to this book, read to you by David and Laura.

Parkland School Shootings During and After

Parkland survivors David and Lauren Hogg in their own words and voices. Must hear.