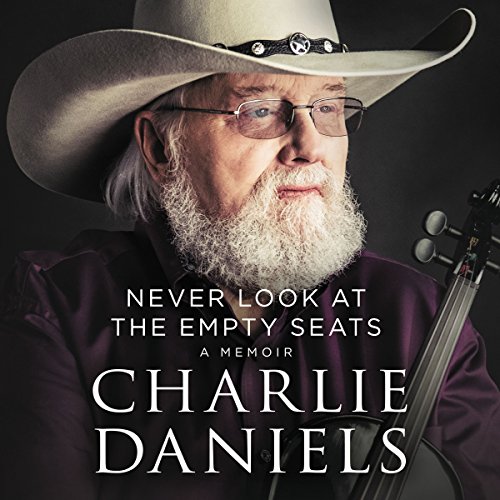 Never Look at the Empty Seats

The Incredible Story of a Country Music Legend

Listeners will experience a soft, personal side of Charlie Daniels that has never before been documented. In his own words, he presents the path from his post-Depression childhood to performing for millions as one of the most successful country acts of all time and what he has learned along the way. The book also includes insights into the many musicians that orbited Charlie's world, including Elvis Presley, Bob Dylan, Willie Nelson, Tammy, and many more.

Charlie was officially inducted into the Country Music Hall of Fame in 2016, shortly before his 80th birthday. He now shares the inside stories from his earliest days in the 1940s to his self-taught guitar and fiddle playing high school days of the 1950s, through his rise to music stardom in the 1970s, '80s, and beyond.

Charlie Daniels presents a life lesson for all of us regardless of profession.

"Walk onstage with a positive attitude. Your troubles are your own and are not included in the ticket price. Some nights you have more to give than others, but put it all out there every show. You're concerned with the people who showed up, not the ones who didn't. So give them a show, and...never look at the empty seats!"

What listeners say about Never Look at the Empty Seats

The Life and Times of Charlie Daniels

Absolutely loved this audiobook, it was made even better by the fact that, Charlie Daniels himself read it too me

This Audio book is just like sitting on front porch with a glass of sweet tea with Charlie. Just like an 8 hours conversation. Charlie tells you the best stories from the heart. Not only is this book amazing & but his voice is so clear. Definitely recommend this for anyone. You don't have to be a Country music fan to enjoy this. Highest recommendation I've ever gave.

This is one of the few books that I listened to the sample and couldn’t wait to hear the whole book. I probably did more work around my ranch so I could keep listening to him! What a story he tells about his life, his political views (which I believe is spot on!!) and his family. I plan on listening to again! Thanks Charlie, it was a wonder book to listen to as I groom Dogs and raked up leaves and such!

Mr. Charlie Daniels has written a fabulous book showing the reader really who he is and where he comes from. He explains how he got his start as a working musician rising to the highest honors one can attain in his industry. He talks of faith, family, friends, community, how hard work can bring one to the “American Dream” (my words, not his)! Just a wonderful book by an American treasure!

An Entertaining Romp Through a Musical Life

Charlie Daniels' narration of his own story is an unexpected treat: a delightful combination of personal wisdom and musical advice. There are many life lessons to learn about dedication, hard work, family, music and dreams. He articulates the "redneck" point of view like no one I have ever heard. It's not my point of view, but I enjoyed hearing someone wise and seasoned who could explain the south, its music and its politics in a respectful way. I rarely listen to an audible book on normal speed. It seems too slow, but I listened to Charlie Daniels on normal speed and never wanted his story to end. Simply delightful.

I have found that the books narrated by the authors are my favorite and Charlie Daniels does an exceptional performance. It wouldn't have been the same without his distinctive voice. Storyline kept my interest. Charlie's integrity and determination are an inspiration. Enjoyed it

No matter where you are in life, there are lessons presented herein that I believe we can all benefit from; I know that I did.

A GREAT STORY ABOUT A GREAT AMERICAN

i had been waiting on this book for months an it didnt let me down. I have been a fan of CDB most of my life. Charlie Daniels is the epitome of countru music and what it means to be an American. He gives you a look into his life and career and even shares stories of the band and his personal life. I hated to finish it.

I laughed and I cried.

Just wanted to say thank you Charlie for sharing your travels and your words of wisdom.

Charlie Daniels is one of the greatest musical story tellers ever. His music has always been sincere, honest, and fun to listen to. That is exactly how I would describe this book. It was fun to hear Charlie's insights on the music industry, song writing, America, and the troops.

if you like CDB's music, or if you just want to listen to a memoir that is insightful, encouraging, and motivational then look no further. I would give 10 stars if I could!!

This memoir was read by Charlie himself. It was like listening to an old man share his wisdom and life lessons over a cup of coffee. It made me laugh and cry and was heartfelt and wonderful.