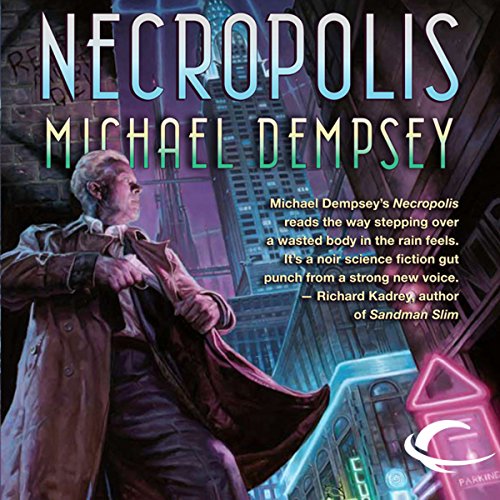 Sci-fi and noir collide in Michael Dempsey's Necropolis, which reveals a future New York where a biological terrorist attack had a strange side effect: The lifecycle of DNA has reversed, reanimating people who were dead and sending them back to childhood. A jazzy noir soundtrack underscores a pitch-perfect performance by voice actor Kevin T. Collins, who easily captures the angst and intrigue of the reborn NYPD detective Paul Donner. Under the biodome that contains the chaos of the Big Apple, Collins tensely narrates Donner's growing obsession with the past, following him in his attempts to track down the killers who were responsible for his death - and his wife's.

In a world where death is a thing of the past, how far would you go to solve your own murder?

NYPD detective Paul Donner and his wife, Elise, were killed in a hold-up gone wrong. Fifty years later, Donner is back: revived courtesy of the Shift. Supposedly the unintended side-effect of a botched biological terrorist attack and carried by a ubiquitous retrovirus, the Shift jump-starts dead DNA and throws the life cycle into reverse, so reborns like Donner must cope with the fact that they are not only slowly youthing toward a new childhood, but have become New York's most hated minority.

With New York quarantined beneath a geodesic blister, government and basic services have been outsourced by a private security corporation named Surazal. Reborns and infected norms alike struggle in a counterclockwise world, where everybody gets younger. You can see Elvis every night at Radio City Music Hall, and nobody has any hope of ever seeing the outside world. Lost in a sea of nostalgia, New York becomes an inwardly focused schizophrenic culture of alienation and loss.

In this backwards-looking culture, where only some of the dead have returned, Donner is haunted by revivers guilt, and becomes obsessed with finding out who killed him and his non-returning wife. Little does he know that strange forces have already begun tracking him. Donner isn't the only one obsessed with the past.

Mr. Dempsey sucked me in and didn't let go until the very end..... 'Necropolis' stands out, by far, from the rest in the genre. It inspired me to actually rate my first book here on audible.com, after having been an active member since 2000 - I've listened to A LOT of books.

Trust me, you won't regret spending the credits!

Argh, this book. It's so "Hollywood" and by that I mean it reads like a Hollywood script, like the author is full of Big!Ideas! and he can totally visualize Chris Hemsworth and Scarlett Johansson playing Paul Donner and Maggie.

It's got Big!Ideas! executed with the finesse of a mediocre comic book scriptwriter doing a bleh imitation of Raymond Chandler.

Oh, I shouldn't be so harsh. The premise is fairly entertaining. A New York City police detective named Paul Donner who stumbled into a hold-up at a bodega gets murdered along with his wife in 2012. Forty years later, he comes back to life. It turns out that some sort of artificially created retrovirus triggered an event known as "the Shift," which literally brings the dead back to life, rejuvenating their bodies. They aren't zombies, they're just reborn. "Rebes," in this futuristic setting, are a feared and despised underclass who creep "normal" people out, in the first of many plot points which really didn't make much sense to me. Like I said, they aren't undead. They do age backwards, meaning they become younger and younger until they literally revert to fetuses and die, but basically they are the same people they were, so there's no reason for everyone to treat them like the walking dead, but because the retrovirus is supposedly contagious, a corporation called Surezal has literally built a wall around New York City (yes, a wall around the whole of New York City!) and turned it into a quarantined police state.

The plot goes in interesting but frequently dumb directions. I will admit that I didn't quite see the Big Reveal coming, and there was at least one twist that surprised me (though most of the others were entirely predictable), but the Big Reveal was.... stupid. As was the James Bond plot and sociopathic villain, yet another cardboard cliche woman, this one a cooing sociopath with monomolecular Japanese "tantos" (why is it always with the Japanese gimmickry? like no one else in the history of the world ever made sharp weapons?) tucked up her sleeves.

There are several minor characters introduced for the sole purpose of dying and revealing some minor plot point that the author couldn't more intelligently fit into the storyline. The world of 2054 (at least New York City, which is all we see) is imaginative in a painted-over-cyberpunk kind of way, full of jokes about reborn celebrities, and retro fashion as apparently everyone decides to emulate the styles of various early 20th century eras, all of this mixing with flying cars, artificial intelligences, and plasma rifles.

This could have been a good book, but it just spiked my BS-meter way too often. Master villains should act like master villains, not idiots who conveniently leave big red buttons labeled "PUSH ME TO DEFEAT THE BAD GUY!" lying around. The characterization was cliched, the dialog trite, the prose flat. It's not a terrible book, but it irked me with its wasted potential, all the bad points irritating me too much to really enjoy it as a fun if dumb read, which at least would have earned it 3 stars.

The narration was okay, but the narrator put a lot of breathless panic and shock and emotion into all the characters' dialog, at times making everyone seem pretty emo, which just made the characters annoy me that much more.

Not a zombie story

Would you listen to Necropolis again? Why?

I'll take the question to be "would you listen to the story knowing what you do now?". Probably. Although the main theme was pretty interesting, the story took a few turns that were so far-fetched that they derailed the momentum. Wish I could give examples without killing the suspense.

Would you be willing to try another book from Michael Dempsey? Why or why not?

Yes, but I would look more closely at the story before purchasing.

Which character – as performed by Kevin T. Collins – was your favorite?

Donner. Who else comes close?

Original- may prove to be one of my favories!!

This novel had a little of everything for me. Mystery, sci-fi, gumshoe detective and a good plot. Even if you are not a sci-fi fan, I believe you would still enjoy this story.

I loved the main character who is the police detective who is killed in the beginning of the novel and is reborn as a "Reeb" which is now the most hated minority in NYC known in the future at Necropolis. The story revolves around these "reborn" people who come back after death and age in the opposite direction by youthing out of existance. Very original premise with a large congolomerate run by the female villian who is behind the entire process.

Highly recommended. Mr. Dempsey paints a excellent picture of the future in 50 years from now along with many references to current day which helps make the story more believable. It will keep you on the edge of your seat waiting to see what happens next.

I don't think so.

Yes, but not in a good way.

Recipe for 'Necropolis'
----------
1. Shamelessly take body parts from other people's creations: Raymond Chandler (Marlow); William Gibson (Neuromancer); F. Scott Fitzgerald (Benjamin Button); Ian Flemming (Bond); et al.
2. Stitch all the parts together to make your patchwork man.
3. Remove all the man's guts: substance; subtlety;driving dialogue; character depth; and anything else found in good writing.
4. Replace the old guts with new guts: excessive melodrama; tons of cheesey, wasted dialogue; overly wordy, poorly descriptive prose; a large amount of feau philosophical rambling; and as much hackneyed B-movie garbage as you can find.
5. Pump that sucker full of electricity until he wakes up and starts living something that only vaguely resembles life.
6. Teach him to speak entirely in cliches that make people's eyes roll, but make sure he's aware of each cliche and explicitly apologizes for it.
7. Now listen to him ramble for 3-4 hours (50-100 pages) longer than you really need to.
8. You've created your very own 'Necropolis.'

That about says it all in a nutshell. The concept screams potential, but the execution left me begging for mercy. I only finished it because I pride myself on almost never abandoning a book, even if it's terrible, you can at least learn what you shouldn't do in your own writing. I can say one thing for 'Necropolis'; it was less painful to finish than Scott Smith's 'The Ruins.'

If you're interested in a more in-depth ellaboration of the book.

I won't reveal anything you wouldn't get from the dust jacket - the premise is a not too distant future New York City, quarantined because it's experiencing an epidemic where the dead return to life. No magic. Corpses regenerate and begin aging backward until a second death occurs - cause unknown but assumed to have a scientific explanation.

The result is a New York City with all manner of renaissances. People from different time periods congregating in certain parts of town. Zoot suits and fedoras along side sci-fi outfits. Great potential for a noir detective story.

The story is just that, and it isn't bad. But I got nothing from character development. Also, the first person narration was histrionic. If you wind up getting the book after reading this review, leave a review of your own and let me know if I'm crazy, or if the narrator's default tone was "tremulous on the verge of collapse"....uses it all over the place. If I worked with someone like this, I'd be asking HR to move my desk for fear he might break down crying at any second.

Really enjoyed this book. It starts out as a simple crime procedural murder with a twist... the man is investigating his own murder. The tension builds as he keeps uncovering new layers behind the event that brought him and so many others back to life. Held my attention and drew me in. Great mashup of styles and genres.

What was one of the most memorable moments of Necropolis?

When Donner realizes his love for Maggie

Where does Necropolis rank among all the audiobooks you’ve listened to so far?

This story is very much a unique tale.

What other book might you compare Necropolis to and why?

This book reminded me of Elantris by Brandon Sanderson in as much as they share a "Dead Rising" theme. Although Necropolis is set on Earth.

I really enjoyed this Narrator. He did a wonderful job with the story.

Very nice, escapist story. Enjoyed a lot. The narrator was OK, but some of his dialects were a little difficult for him. The story was good too, although the front end could use some tightening. But overall, certainly worth a credit.