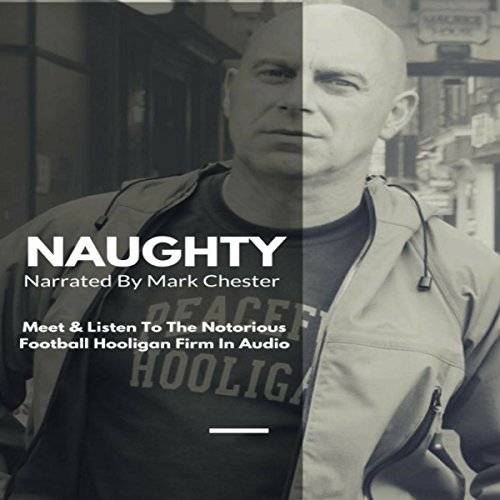 Naughty: The Story of a Football Hooligan Gang

In 1985, 40 hooligan followers of Stoke City FC experienced a riotous trip to Portsmouth - and the Naughty 40 was born. It became one of the most notorious soccer gangs in Britain.

Mark Chester was a founder member of the N40. Already a hardened fighter, he had been expelled from school after an unsettled childhood and joined the Staffordshire Regiment, only to be discharged for misconduct. Stoke City's emerging "casual" mob became his family. "Right or wrong, I was ready to be a committed football hooligan," he says.

He recounts tales of raucous coach trips from the Glebe pub and the pivotal clashes with the likes of Everton, Manchester United, and West Ham that defined the new firm. Formidable characters came to the forefront, men like the giant Mark Bentley, Philler the Beast, and the legendary Miffer, while hair-raising clashes with the likes of Millwall, Spurs, Aston Villa , and Manchester City saw the gang's reputation spread.

The N40 code was simple: Whatever the odds, they would always make a stand. Many times, they fought when heavily outnumbered yet often came out on top. They developed a closeness and cohesion rare among the football gangs. Loyalty was their watchword.

Soon, they were joined by the Under-Fives, a younger element determined to win acceptance from the terrace legends they admired and who carved out their own niche as well as fighting side by side with the old-school heads.

Police operations, bans from the ground and the introduction of ID schemes have prevented many from attending games, but the author, long "retired" from the scene, argues that in the new millennium the gangs are back - and as ferocious as ever. Naughty is essential for anyone wishing to understand the illicit but seductive lure of terrace combat, the emotional ties of a gang, and the addictive buzz of Saturday afternoons.

What listeners say about Naughty: The Story of a Football Hooligan Gang

the worst book I've ever listened to

literally this book is terrible. the timeline to his story is as about as structured as a motorway bridge made out of weetabix.

what was i thinking

not sure what i expected from this book but 14hrs of 'this season we had a fight with blah' is really boring.

Enjoyed the audiobook. Read with passion. Sometimes seemed OTT but a good read. Would recommend

I've done a few hoolie books and they vary in quality, this is outstanding because of its personal nature, Jasper is an interesting character and it was refreshing to hear an honest account that sees Stoke getting done even at places like Oldham , nothing worse than reading books where they "do everyone". The Gibraltar stuff with the army is very good as well , though the scariest thing in the book is his mother , who is truly a horrendous human being. All in all a very pleasant surprise and far more than simply bashing people up on the terraces.

what an incredible book, sad, funny, scary but a non-stop listen all the way through.

Good to hear a hooligan book that talks more about the mindset and psychology. Enjoyed hearing about his upbringing and the army. In the end though it was just quite repetitive and went on too long.

Mark did a sterling job here telling his and the lads story. Loved every min

Total respect for putting this together.

Jasper has lived it, loved it and put it down on paper.
Perfectly captures the different eras and culture lots of us grew up with and understand.

Hope for some kind of sequel. :)

Great book and the aurther reads it like a poem. It's very addictive. And funny. And very very honest.

Not Bad - Not Great

Some of the stories are interesting. Narrator's got a cool voice, but he sounds like he's about to drop some heavy, heavy story on you at any moment, but never does. Hooliganism is silly anyway,

Excellent and we'll detailed story in the life of not just a Hooligan, but a man's journey through life and it's encounters. As a West Ham supporter I've seen all the hooligan movie's about the ICF and other's like Awaydays covering Ipswich Firm, but this was very insightful as to how other Firms really made a name for themselves. Mr. Chester job well done and wish you the BEST IN LIFE.