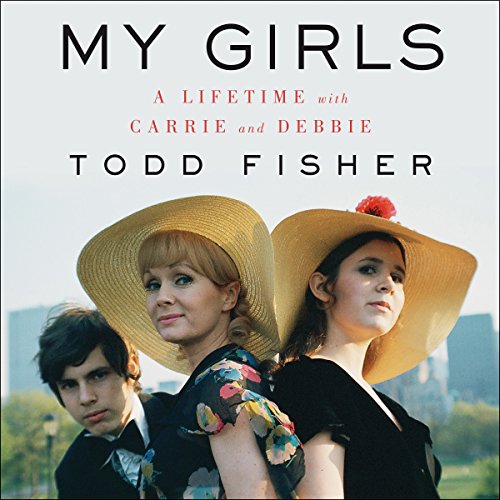 A revelatory and touching tribute to the lives of Carrie Fisher and Debbie Reynolds written by the person who knew them best, Todd Fisher’s poignant memoir is filled with moving stories of growing up among Hollywood royalty.

In December 2016, the world was shaken by the sudden deaths of Carrie Fisher and her mother Debbie Reynolds, two unspeakable losses that occurred in less than 24 hours. The stunned public turned for solace to Debbie’s only remaining child, Todd Fisher, who somehow retained his grace and composure under the glare of the media spotlight as he struggled with his own overwhelming grief.

The son of "America’s Sweethearts" Debbie Reynolds and Eddie Fisher, Todd grew up amid the glamorous wealth and pretense of Hollywood. Thanks to his funny, loving, no-nonsense mother, Todd remained down to earth, his own man, but always close to his cherished mom, and to his sister through her meteoric rise to stardom and her struggle with demons that never diminished her humor, talent, or spirit.

Now, Todd shares his heart and his memories of Debbie and Carrie with deeply personal stories from his earliest years to those last unfathomable days. His book, part memoir, part homage, celebrates their legacies through a more intimate, poignant, and often hilarious portrait of these two remarkable women than has ever been revealed before.

Todd’s book is a love letter to a sister and a mother, and a gift to countless fans who are mourning the deaths of these two unforgettable stars.

What listeners say about My Girls

Listened to 'My Girls - A Lifetime with Carrie and Debbie' by Todd Fisher in two days. Outstanding! I laughed and cried and Todd Fisher's narration is simply perfect. One of the best audiobook experiences I've had.

i luved every bit of this story. i could listen to this over and over again . tyvm todd for letting us into ur world with ur girls🙂❤

Absolutely loved it! Having already read Debbie and Carrie's memoirs, it was great to hear about events from Todd's point of view. Couldn't pull myself away.

I loved this story sensitively told by Todd about his mum and sister who all clearly loved each other! it was a fascinating read with fabulous anecdotes and stories of a bygone era. Wonderful

Todd Fisher grew up with his sister Carrie, same homes, same parents, but they each had very different experiences and perspectives of those years. And it was really interesting to learn about how Todd saw those years, as I had already read Carrie Fisher’s memoir Wishful Drinking.

Aside from some fairly douche-y behavior when Todd was a teen, I found his memoir really kept my interest. There are lots of details about his moms truly awful second and third husbands. Yes, like DR said on stage....it does look like Eddie was the good one. Todd also outlines what happened through the years with her dream for a museum for her costume collection, her Debbie Reynolds Hotel in Vegas, the auctions to sell those costumes, the documentary Bright Lights, Carrie's health and drug issues, and so forth.

Born to Hollywood Royalty, Todd knew an extraordinary roster of celebrities. He has killer stories about Bette Davis in his bathroom, Liz Taylor and Richard Burton in his moms bedroom, his step dad buying him an actual military tank as a prop for his home movies, and offers a close look into what it was like being the beloved son of a mom who denied him almost nothing.

If you enjoyed Wishful Drinking, Bright Lights, or just miss Carrie and her mom, I think you will like this book. And he does just fine with the narration as well, very down to earth, like he’s telling you all of this over lunch.

Written with Love from the Inside Looking Out

Written with love from the inside looking out, Todd Fisher speaks from the heart about his privileged upbringing, the special bond he shares with his sister/mother, and provides insights on his and each of his family member’s personality, their virtues and vices.

The Fisher-Reynolds story confirms that regardless of income, no one is immune from the adversities that plague typical American families such as jealousy, drug addiction and mental health issues.

“My Girls” is a great read! If you listen to it on audible like I did, you’ll get an extra bonus as the narrator is Fisher himself. Enjoy!

I have been a long time fan of Debbie and Carrie so I was excited to see this book by Todd Fisher was out. I did worry that it would be just the same stories that Debbie and Carrie have already written about in their books. Though there are a couple of stories that Todd retells it's from his point of view mostly and it makes the whole story even more interesting.

I have often wondered why Todd was the only one who has not written a book and you find out why in My Girls. I cannot say enough about how great this book is. Todd really knows who to draw you into the book and keep you wanting more. I learned so much more about them all. Very much like his mom's and sisters books, Todd's book made me laugh, cry and I feel like I was right there with Todd the whole journey of his life stories with Debbie, Carrie and most of all Todd's story, that has never been told, until now.

As a fan, I thank you, Todd, for writing this book. It's a must read/listen!!

Todd Fisher, son of Debbie Reynolds and brother of Carrie Fisher, has written a powerful and touching book. His narrative sounds like he is telling the amazing story of their lives to us personally.

the title of this book should be called The Name Dropper... geez louise Todd get over yourself

Loved loved loved.
I laughed. I cried. I’ve read all his sisters books and seen most of her films. I love audiobooks where the author reads his own words. This book was insightful of a family that been through quite crazy adventures. Highly recommend for a good lazy weekend. The last 2 chapters had me in TEARS.

After listening to Todd Fisher's MY GIRLS, A lifetime with Carrie Fisher and Debbie Reynolds you will never envy anyone again. I enjoyed this listen more than most celebrity books. In fact, I can safely say, MY GIRLS is the best autobiography of three of the most interesting people in Show Business. The third of course is Todd Fisher, the only son of Debbie and the one sister that Todd adored. At times I felt that I was listening to the most truthful telling of a story that has captivated the world for more than sixty five years.

This book is worth owning! After your first listen you will want to hear it again at a later date. Usually an author that reads his or hers own works are boring and dull. However, Todd Fisher did a fantastic job narrating his own work. It felt real to the point of making me cry, laugh, and lastly never to be jealous of anyone's life or envy people you may perceive have it all, because they don't. It's easy to perceive in our own minds that money, fame, or great success makes us happy. DON'T BELIEVE THIS FOOLISH LIE! IT IS SIMPLY NOT TRUE!!!

I always felt jealousy was a wasted emotion. After reading this book. or listening in this case, I really came to believe all of us are basically the same. Pitfalls in life exist in everyone, including the rich and the famous...that are often worse than our own life's experiences.


I have no idea how Todd turned out to be a kind and generous soul he became as an adult. In fact, I commend Todd for this one accomplishment...that speaking for me only, I probably never would have achieved.

This is a book not to be missed. It's worth more than one credit! You will not be able to stop listening to MY GIRLS! It's simply a wonderful story.

Thank you for reading my review. I know after you hear it you will agree.
Best,
Steve

Great book and Todd is a fabulous narrater

So very Well written, so interesting and so inspiring!. Todd has a wonderful voice and is fabulous story teller of his families legacy .
I have always admired Carrie and Debbie Fisher. But that Todd what a wise, kind, gifted, hard workingman , artistic and caring humanitarian. From all I now know about this family, I so admire them and wish I could have personally known them all.

I started listening to it and didn't stop until I was finished. Very good book.

I was expecting the humor from his sister to carry forward in this book, instead it’s a bit self-indulgent. What really turned me off (I didn’t finish this book), was when he became a Christian and the book started feeling like an altar call.

Didn’t finish the book-I did give it an effort. Made it to chapter 13 before I called it quits.