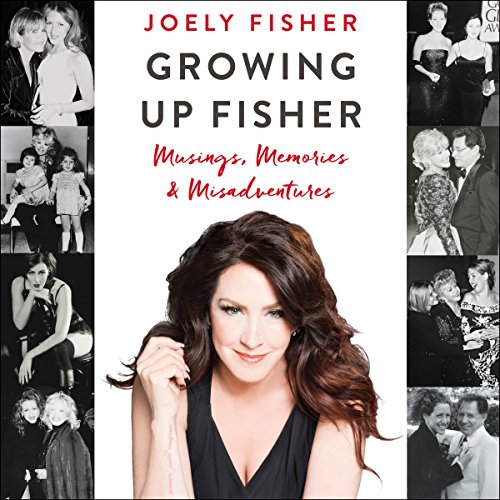 Actress, director, entertainer Joely Fisher invites listeners backstage into the intimate world of her career and family with this hilarious, irreverent, down-to-earth memoir filled with incredible, candid stories about her life, her famous parents, and how the loss of her unlikely hero, sister Carrie Fisher, ignited the writer in her.

Growing up in an iconic Hollywood Dynasty, Joely Fisher knew a show business career was her destiny. The product of world-famous crooner Eddie Fisher and '60s sex kitten Connie Stevens, she struggled with her own identity and place in the world on the way to a decades-long career as an acclaimed actress, singer, and director.

Now, Joely shares her unconventional coming of age and stories of the family members and costars dearest to her heart while stripping bare her own misadventures. In Growing Up Fisher, she recalls the beautifully bizarre twist of fate by which she spent a good part of her childhood next door to Debbie Reynolds. She speaks frankly about the realities of Hollywood - the fame and fortune, the constant scrutiny. Throughout, she celebrates the anomaly of a two-decade marriage in the entertainment industry and the joys and challenges of parenting five children, while dishing on what it takes to survive and thrive in the unrelenting glow of celebrity. She speaks frankly about how the loss of her sister, Carrie Fisher, became a source of artistic inspiration.

Fisher's memoir will both break and warm your heart.

What listeners say about Growing Up Fisher

Not what I thought it would be but I loved it.

Call me shallow but I thought this would be more about Carrie and their relationship as half sisters but it really is, and rightfully so, about Joely and her mom Connie Stevens. She does talk about Carrie and it is clear she loved her sister very much. Any disappointment I may have thought I would feel when I realized I had been wrong about what the book would be was quickly erased as I really loved learning about Joely and Connie, her Mom, and her other sister and the whole family. I grew up a fan of Connie and it was really nice to learn so much about her. It was also amazing to see the same kind of problems that Debbie and Carrie had going on in their life were also going on with Connie and her girls. The wrong guy for a husband more than once and bad financial decision.

What this book is about is love, the love you have for your family and the love they have for you. That is if you are lucky to find that love with your family. I must admit I was jealous of the bond these people all seem to have in both the Fisher house but also in the Reynolds house also.

This book will make you laugh, cry and learn about life and how no one's grass is really greener, everyone has their demons and cross to bear. If you are a fan of Connie, Joely or Carrie I think you will love this book as much as I did. If you are a fan of Carrie's book you will like this one as I feel Joely and Carrie have a very similar style or at least one that compliments one and others style.

In short, I know too late, It's just a really good book and Joely reads it to you like she is sitting down over coffee with you telling you about her like, and what a life. What a book and WOW what a great family the whole bunch of them were and are.

A bit sweet, a bit sad, a bit risqué.

I was looking for something light and entertaining. I got some of what I wanted. Joely Fisher’s writing is occasionally reminiscent of her sister Carrie Fisher, but their stories and overall styles are quite different of course.

There was much in the book about her mom Connie Stevens that I didn’t know, and it was lovely to hear about the close relationship of the Fisher girls. There are also trials and tribulations, a bit of kiss and tell and more than a few drug fueled Hollywood parties, which I could have done without, but it often comes with the territory with celebrity memoirs.

Joely Fisher has had an uncommon life, and a front row seat to both old and new Hollywood. If celebrity memoirs are your thing, you will probably enjoy this book and her narration is quite good. I think the book finishes quite strongly with her thoughts and reflections on the life and death of her sister Carrie Fisher, her own confrontation with aging, and the impending mortality of her mom.

Another side of the coin

Having listened to all of Debbie Reynold's audio books and then Carrie Fishers and Eddie Fishers, it was fun to get a completely different point of view on much of what had been written by others. Joely does a great job of telling her story and also letting the reader know what became of her own mother, Connie Fisher (heartbreaking to learn she'd also had a stroke around the same time as Debbie Reynolds). This is a story of a famous, but very flawed family, that allows the reader to know it isn't always greener on the other side and that celebrities are just like the rest of us - damaged, loved, forgiven their flaws.

I was only aware of Joely as Carrie Fishers half sister. Her story is a good one, lots of high and lots of lows. She is very honest about her life which make the book even more enjoyable. Her description and struggle with her aging mother touched me deeply. I can relate on all levels, gives you comfort to no you are not alone.

Worth your time, Joely is fantastic!

Joely is an incredible storyteller with so much life experience and wisdom. I recommend this book to all !!

So very sorry Connie~ This breaks my heart!

Of course there is an interest as to what went on within this family, but I really struggled with the disrepect shown toward her mom (most often just referred to as Connie). She is a legend~ being a single parent to 2 daughters while maintaining a career in such a difficult industry deserves a better tribute. No one is ever prepared to be the caretaker of their parent, but you step up & do it with unconditional love & absolute respect.

I wish I could request a refund. It honestly felt like she was throwing in Memories of Debbie Reynolds just to remind people that she knew her. They were completely out of place. Plus her hatred towards some people just took away from the story. If you feel the need to read this, wait till it’s on the discount rack or better yet at the Dollar Tree.

This book has two stars only because the author can write, sort of, and has her way with words. The story has very little to do with the title. It is all about her and her ego, not her family in any detail. My Girs by Todd Fisher is far far better!

NO! I found her delivery after a while very annoying and self involved..had to turn it off..

Feel bad I have such a negative reaction but really didn’t like her breathy over dramatic delivery of her story. Wish her well