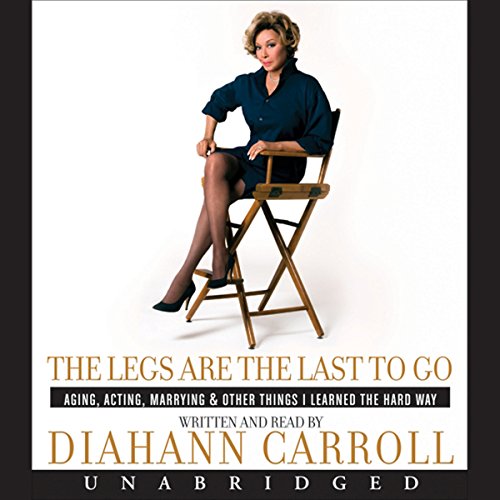 Legs Are the Last to Go

It's conventional wisdom that Hollywood has no use for a woman over 40. So it's a good thing that Diahann Carroll, with her winning career, is anything but conventional.

With wisdom that only aging gracefully can bestow, she talks frankly about her four marriages as well as her other relationships, including her courtship with Sidney Poitier; racial politics in show business; and the personal cost, particularly to her family, of being a pioneer.

From a recent, Emmy-nominated role on Grey's Anatomy to appearances on Oprah, Diahann Carroll's legendary stage, film, and television career has spanned more than five decades.

Her title role on Julia beginning in 1968 established Carroll as the first African-American actress to star in her own television series. The role garnered her both an Emmy nomination and a Golden Globe win to go along with the 1962 Best Actress Tony Award she won for her role in No Strings (also a first for a Black woman). Diahann also received an Academy Award nomination for Best Actress for her role in Claudine.

In the 1980s, Diahann joined the glitzy night-time soap opera Dynasty as the jet-setter Dominique Deveraux.

Carroll's career continued strong in the 1990s with appearances in films such as The Five Heartbeats; she also starred as Norma Desmond in Sunset Boulevard.

As a breast cancer survivor and activist, Carroll invited a camera crew into her treatment room for a national broadcast special to draw attention to the cause.

Ever the consummate performer, her cabaret show at Feinstein's traveled nationwide to sold-out audiences.

What listeners say about Legs Are the Last to Go

Ms.Carroll writes her memories the same as her professional image: full of class! I finished the book hoping so much to have lived in her life and been her friend. I loved the wonderful self confidence that she has exuberated throughout her life and never for one second expressed regret, bitterness or presented herself less than perfection in every part of her live. I loved the book and highly recommend it to anyone who longs for the golden age!

It was a ride through her life! She was brutally honest about her challenges, and her voice brought so much life to her adventures that it felt like an experience for the listener as well! A Great listen!!!

Diahann Carroll is in fine form and shares some of the most intimate moments and lessons learned from a rich life.

Diahann Caroll is the epitome of grace and elegance. This book just confirms the image of her I've always had...she is a class act.

totally a great trip into her!

Makes me want to do Better! in my own life I had with my mommy!

I was throughly impressed by this work of art. However, I expected nothing less that from such a keen, intelligent, and wise beauty! Her ability to tell a story from decade to decade and still capture your attention was everything. I lived her transparency and her ability to make the audience feel as though you were there conversing with her. I recommend everyone to read/listen to this book whether you were a fan or not. But who am I kidding, you either love her or hate her because you want to be her!


Her honesty and transparency were amazing. She delivered wisdom and experience without taking herself so seriously.
I laughed A LOT!

What an outstanding biography on the life of legend Diahann Carroll. You get to understand her class and talent at a young age growing up in my hometown if Harlem, New York. Her struggles and triumphs to succeed in the world of entertainment, is all explained in such awesome detail by the author. A great read.

Her Life Her words!

Absolutely WONDERFUL! I always love a good autobiography read in the person's own voice.

Explains what I Expected

Mdm Diahann You Are Legend! Although you had not the greatest love connection for self I assure u the pickings are friggin slimmmmmm these days. I thank you for your story, ownership, and candor! Your story aligns with your demeanor and upbringing make all the sense in the world

I finished the book because it's Diahnn Carol. She seems a bit snooty and ensures that even during the parts where she shouldnt shine, she shines.