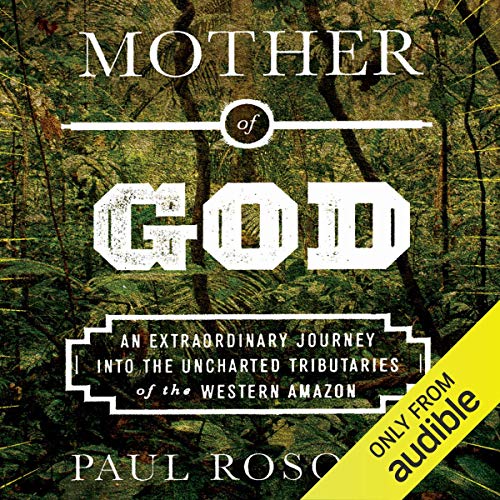 By: Paul Rosolie
Narrated by: Jonathan Yen
Try for £0.00

For fans of The Lost City of Z, Walking the Amazon, and Turn Right at Machu Picchu comes naturalist and explorer Paul Rosolie’s extraordinary adventure in the uncharted tributaries of the Western Amazon - a tale of discovery that vividly captures the awe, beauty, and isolation of this endangered land and presents an impassioned call to save it.

In the Madre de Dios - Mother of God - region of Peru, where the Amazon River begins its massive flow, the Andean Mountain cloud forests fall into lowland Amazon Rainforest, creating the most biodiversity-rich place on the planet. In January 2006, when he was just a restless eighteen-year-old hungry for adventure, Paul Rosolie embarked on a journey to the west Amazon that would transform his life.

Venturing alone into some of the most inaccessible reaches of the jungle, he encountered giant snakes, floating forests, isolated tribes untouched by outsiders, prowling jaguars, orphaned baby anteaters, poachers in the black market trade in endangered species, and much more. Yet today, the primordial forests of the Madre de Dios are in danger from developers, oil giants, and gold miners eager to exploit its natural resources.

In Mother of God, this explorer and conservationist relives his amazing odyssey exploring the heart of this wildest place on earth. When he began delving deeper in his search for the secret Eden, spending extended periods in isolated solitude, he found things he never imagined could exist. “Alone and miniscule against a titanic landscape I have seen the depths of the Amazon, the guts of the jungle where no men go, Rosolie writes. “But as the legendary explorer Percy Fawcett warned, ‘the few remaining unknown places of the world exact a price for their secrets.’”

What listeners say about Mother of God

I really enjoyed this book. It's interesting and educational. The story is mesmerizing: after being addicted to the outdoors (trees, plants, snakes, spiders, etc.) his entire life, an 18 year old guy makes a trip to Peru to journey into the Amazon and becomes even more addicted to it. He makes local friends and learns to survive in the Amazon. He tells of many journeys, some with others, and some solo, in which they see all kinds of wild animals and capture enormous snakes ("...as high as my knees."). His passion for the protection of wildlife and the untouched wilderness is noble and motivating.

My only disappointment was the reader. I thought his voice was just a bit too slow and deliberate. He tried to put some emotion into the story, but I found him a bit flat. My wife listened to him for a bit and said he sounded fine, so maybe it's just me.

That didn't ruin the book for me. It's a great listen, and I've recommended it to others.

This whole book is B.S.

I’ve spent more of my life traveling and seeking out wildlife in out of the way places than I have spent working. Spent years tramping around in neo-tropical rainforest. Have crossed the Honduran Mosquitia alone. I’m 42. I love nature and travel literature. This is neither. This is a fabrication. This man doesn’t even have much experience as he writes the book. His encounters in the jungle are ludicrous. This is dishonest writing. Jungles are not grasslands. Wildlife is much more sparse. You don’t go out looking for large stealth predators and find them. The author only spends a dozen days in the jungle alone and the unverifiable experiences he claims to have had are laughable. This was written by an attention seeker. He wants to be the Crocodile Hunter or David Attenborough but he has not done the work and his writing is dishonest. I googled him and it seems he has since made a “shark -week” style anaconda show for cable tv. That sort of garbage is at least more honest than writing a fake book. I would suggest the author switch to fiction but he doesn’t have the skills to get published. Saving habitat is important but so is honesty in your memoir. Don’t buy this book until it is catagorized under fiction.

A Love Letter to the Amazon

Informative, passionate, hyperbolic, engrossing... Mother of God is a love letter to nature and a compassionate roar of outrage at the damage being done to the Amazon and it's inhabitants. It celebrates the beauty of natural places and is simultaneously a very personal story. I enjoyed it. The author, Paul Rosolie, shines most when he gets emotional about his subject matter. His love of nature and adventurous spirit are evident throughout the book. I was nearly moved to tears at times and I felt shared outrage at others.

I definitely recommend this to readers who enjoy tales of jungle adventure and exploration as well those who care about nature and conservation.

For Dreamers and Doers

This book is an amazing journey as a person is transformed by the Amazon. Great narration and awesome story. I would like to visit the las pedares camp one day.

This story was funny and serious. It opens your eyes to the domino effect that nature has on us and us on nature.
The writer creates an emotional journey that was worth the trip.
#MansSelfishDestruction #Funny #Inspiring #SouthAmerica #Tagsgiving #Sweepstakes

An absolutely incredible story. Loving adventure myself, I related to this book on multiple levels.

ANYONE WHO WANTS TO UNDERSTAND HOW IMPORTANT THE PRINSTINE AMAZON IS TO ALL LIFE MUST READ. MUST PROTECT BEFORE ITS DISAPPEARANCE AS THE COUNTY OF INDIA 50YRS AGO USED TO HAVE TIGERS AND ELEPHANTS ROAMING. NOW ALL GONE MADE UP OF MILLIONS OF PEOPLE IN CITIES. PROTECT THE AMAZON

OK, but dogmatic and preachy

The journey of the authors personal growth and self awareness are OK, but his views are not well supported and presentation of his position is that of a fanatic preaching and expecting his views to be taken without question. I applaud some of his conservation work, but after reading the book doubt his ability to draw an unbiased big picture view.